Back In The USA 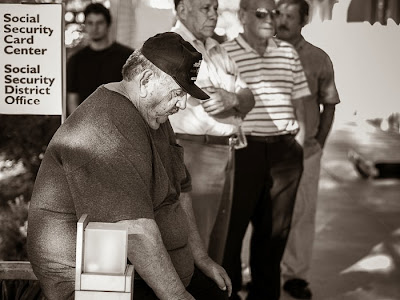 A man waits to see someone at Social Security on the first day of the GOP's mandated shutdown of the federal government. Social Security was deemed non essential and provided only limited services to Americans in need of a little help.

I come back to the United States and the Republicans respond by shutting down the federal government. I went out early the first day of the shut down to see how people were handling it. There was a long line of folks waiting to get help at Social Security, which had a note in the window that they would be offering limited services because of the shutdown. I made some photos of people waiting for help at Social Security then drove around to other federal offices, most of which were open.

Arizona is in a unique position regarding the shutdown. There are lots of federal law enforcement officers and agencies here. Most of them are on the border but there ICE, ATF, DEA, FBI and the others in the federal alphabet of law enforcement have a huge presence in Phoenix and they were not furloughed.

Arizona is also home to some of the greatest National Parks in the country. Park like the Grand Canyon and Saguaro National Park, were shut down. It's not just the federal employees who are losing out in this GOP inspired game of chicken. Tens of thousands of vacationers have had their plans ruined and, more importantly, the many small businesses in northern Arizona that rely on the Canyon are being forced to lay people off or shutter the business because a minority party can't get its way. To people in big cities, with diverse economies, like Phoenix, this is an inconvenience. But in rural areas, near the Grand Canyon, areas still reeling from the Great Recession, this GOP exercise is forcing them into a full blown depression.

Arizona is also home to two large Air Force bases. Davis-Monthan in Tucson and Luke in Phoenix (Glendale really, but it's the Phoenix metro area). The bases are open and the military personnel working (but without the perk of being paid). Many of the civilian contractors though have been furloughed, and like the park employees, are left scrambling to make ends meet.

I went out to Luke on the second day of the shutdown to photograph the workers' informational picket.

There are more photos from the first two days of the shutdown in my archive or available from ZUMA Press. 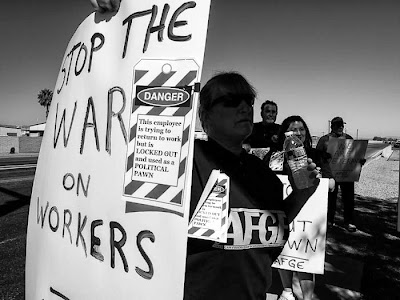 Civilians workers at Luke Air Force base on their informational picket to protest the shutdown.

Finally, most of the photos in my archive are available for editorial use or self fulfillment as prints. If you see something you'd like to use or just hang on the wall, click on the "Add to Cart" button and follow the onscreen prompts.
Posted by Jack at 18:03