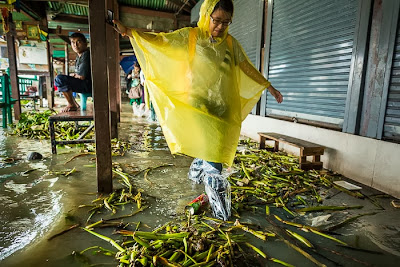 A tourist walks through flood waters at the Tha Tien ferry pier near Wat Po and Grand Palace in Bangkok Monday. One of the last pictures I made on this trip.

Monday was my last day of photography in Bangkok. I went down to Wat Arun to make some pictures of the temple. I've photographed Wat Arun a couple of times during earlier visits but I haven't been down there too much this year - it's one of the first stops most tourists make when they get to Bangkok and while it's a wonderful temple, I've used my time exploring new parts of the city and Thailand.

Wat Arun is directly across the Chao Phraya River from the Grand Palace and Wat Po and is a part of the tourists' vortex in that part of the city, so I never saw the need to spend too much time there. Monday I went down there because the temple's stupa is being closed for renovation. It will be closed for three years and Monday was the last day tourists could climb around on the world famous temple. Workers were putting up scaffolding even as the tourists were navigating the very steep and slippery stairs of the temple.
Wat Arun Closed for Renovation - Images by Jack Kurtz

I had an early lunch appointment with a friend so when it started to rain, I took the that as my cue to head back uptown. The pier on the Bangkok side of the river was under more about a foot of water and every time a boat churned up a wake, a wave came rolling in over the tourists and Thais on the pier. 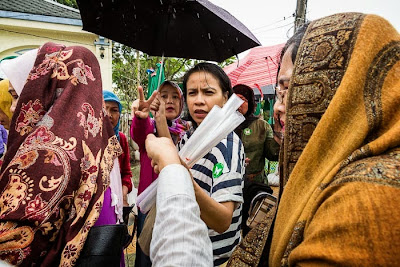 Tourists haggle with vendors about the price of baggies. The tourists were using the baggies as rain boots.

I made a few photos of the flooding, because flooding is always an issue in Thailand, jumped in a tuk-tuk (comfort tip, tuk-tuks and flooded streets are a bad combination) and headed to lunch.

I will be back in the US for six to eight weeks to take care of some family business and expect to be back in Asia by the middle of November. I won't be photographing too much while I'm in the states - I have a lot to do, but I will be covering news stories that come up in the Phoenix area so stay tuned. 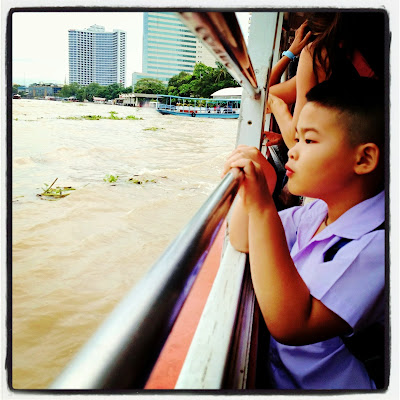 Riding a Chao Phraya Express River Boat, a boy on his way to school watches Bangkok go by, made with my iPhone.