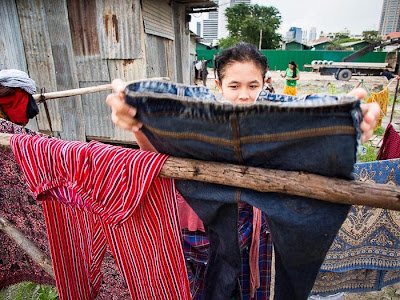 A Cambodian woman who works on a Bangkok construction site hangs out her laundry for drying after her work day in central Bangkok. Her dorm is the corrugated metal hut in the background.

I haven’t written a blog entry in more than a week. Sorry about that. I’ve been busy, but I haven’t had a body of work to blog about because I’m juggling a couple of different projects.

One project I’ve sort of finished is something on construction workers in Bangkok. This city is in the midst of huge building boom. Although I’m not really sure if it qualifies as a building boom when the construction seems to be constant. Construction cranes dot the skyline of Bangkok.

I wasn’t so much interested in the actual construction work as I was the construction workers. I’ve seen dormitory type units on a number of sois in Bangkok but never knew who they were for. In fact, I thought they were squatter tenements because most of them look run down and impermanent.

It took me a while to figure out they’re actually company provided housing for construction workers. I’ve tried to go into a couple to photograph the workers and but security guards always stopped me at the gates.

A few weeks ago a new set of construction dorms went up in an empty lot near my apartment. Like a lot of things in Bangkok, it happened without notice. The lot had been standing empty for almost the entire year I’ve been here. Then one night I was walking home after dinner and a fence was going up around it. The next week there were dorms and people living there.

One evening I walked in (no security guards yet - the project is just getting started) and photographed a few guys drinking at a makeshift bar on the site. Then I walked to the back of the site and there were four or five Cambodian couples relaxing after work. I made small talk with some of them (many of the Cambodian migrants speak a little English) and started photographing.

I’ve been back several times since. The workers’ circumstances interests me.

Bangkok is an amazing city, but it’s also a hard city. Like so many huge global cities, there are the workers here - the low wage, relatively low skilled workers who toil under very difficult circumstances to build the giant condominium complexes and shopping malls that make this city what it is.

They know they will never be able to live or shop in the buildings they labor to construct. Many of them are migrants from rural Thailand and Cambodia and make the equivalent of just $10 US per day.

Then there the elite who live in the towers and shop in the malls and consume what the workers make. None of what’s happening here would be possible without their money. It is not that dissimilar to what is happening in the US and Europe where a small class of very wealthy people are consuming a disproportionate share of resources while the growing under class serves them. 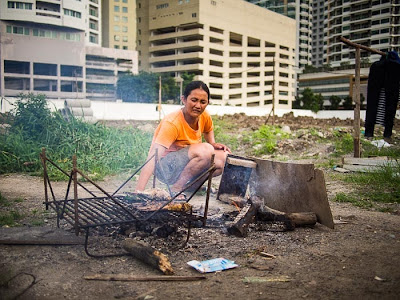 A woman cooks her dinner over an open flame. The dorms she lives in, temporary buildings made of corrugated metal, are surrounded by high rise condos and apartments for Bangkok’s elite.

A lot of this project is being done with my Micro 4:3 equipment. It’s a lot smaller and much less intimidating than my big dSLRs. People I photograph with the small cameras seem much more relaxed than people I photograph with big dSLR. I‘ve really come to rely on the M43 stuff a lot than I thought I would when I first came out here. It doesn’t replace my Canon gear for everything I do but used properly and on the right project, Micro 4:3 is a very capable tool. 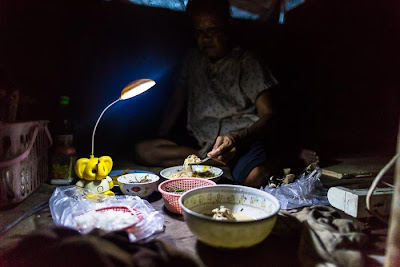 This is the type of project that could go on as long as I’m living in Bangkok. As it is, I’m wrapping it in the next few days. My time here is drawing short (I leave in a couple of weeks) and I have a few other things lined up that I’m trying to complete. So I’m going to put the workers’ story on hold for now. I’ll pick it up again if I come back later in the year. 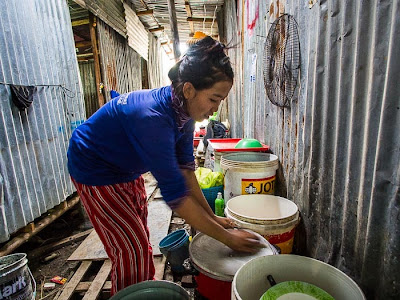 A woman washes dishes in the hallway between the workers’ dorms.

There are more photos of the workers and their living conditions in my archive or available from ZUMA Press.
Thai Construction Workers Live on Their Job Sites - Images by Jack Kurtz

Finally, most of the photos in my archive are available for editorial use or self fulfillment as prints. If you see something you'd like to use or just hang on the wall, click on the "Add to Cart" button and follow the onscreen prompts.
Posted by Jack at 04:19