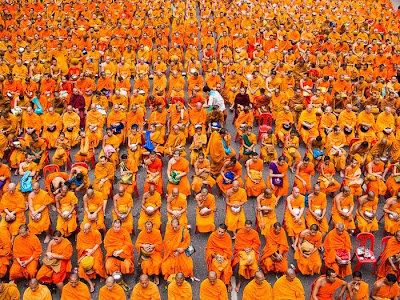 A small portion of the 10,000 monks that attended a mass merit making ceremony at Ratchaprasong Intersection in front of Central World Sunday morning.

I went to a mass merit making ceremony in central Bangkok this morning. There about 10,000 monks and at least three times that number of Thais to make merit. I didn’t stop to count each person, but the area was so densely packed it was almost impossible to move for more than a kilometer along Ratchadamri Road, the main road to the east of Central World. 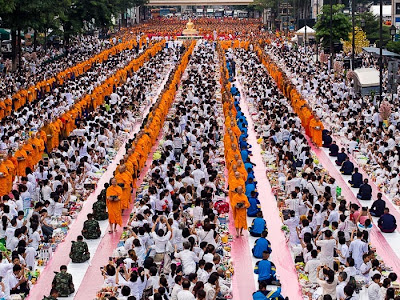 Monks walk through the crowd during the merit making ceremony. This picture shows about half the crowd.

The ceremony was to benefit the victims of disasters in Thailand - landslides, floods, fires and the like - and to assist the monks in the 323 Buddhist temples in the deep south of Thailand. Monks in the deep south can’t go out on alms rounds with the same freedom of movement that monks enjoy in the rest of Thailand because of tit for tat violence in the Muslim insurgency in the three “restive” provinces.

The ceremony was also on opportunity to promote Buddhist culture and an homage to the “Three Gems,” the bedrock of Thai Buddhism: Buddha (the Enlightened One), Dharma (the teachings of Buddha) and Sangha (community of monks). 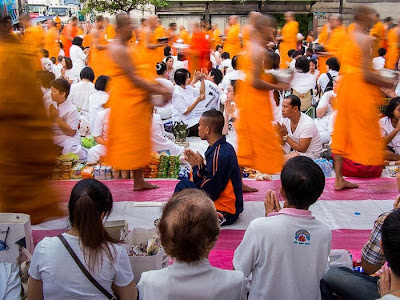 A picture made with a slow shutter speed to blur the monks as they walk through the crowd.

This was not my first mass merit making ceremony. There are three or four a year in Bangkok. But this was by far the biggest and will probably be the biggest one of 2013. Spirituality here is different from spirituality in the US. Thailand is a Buddhist country, but other religions are freely allowed to practice their religion. Although Christian holidays are not officially celebrated (except for Christmas, but that is mostly the commercial celebration of Christmas) but there is no discrimination against Christians, Jews, Hindus, Muslims or most any other faith here.

There are more photos from the merit making ceremony in my archive or available from ZUMA Press.
10,000 Monks At Mass Merit Making Ceremony - Images by Jack Kurtz