Quiet Day on the Protest Lines 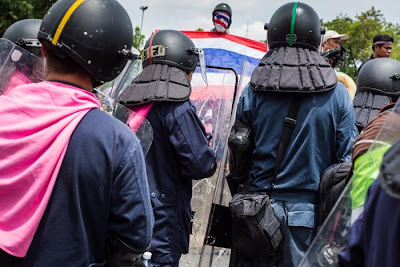 An opponent of the amnesty bill in the Thai parliament stands in front of riot police at a roadblock in the Dusit section of Bangkok.

Wednesday was supposed to be the big day on the protest lines. Opponents the Pheu Thai (the ruling party in Parliament) threatened to take to the streets to block passage of a controversial amnesty bill. Organizers of the protest said they would mobilize thousands of people to block the bill, which could end up granting amnesty to exiled former Prime Minister Thaksin Shinawatra. The possibility of passing the amnesty bill has breathed new life into Thaksin’s enemies. The Yellow Shirts, the White Masks, the new People’s Force for Democracy to Overthrow Thaksinism (Pefot), all threatened to block the bill.

Thai police took the protesters at their word and mounted a massive security operation. They implemented the Internal Security Act, which bans large gatherings and grants special powers to the police. Many streets around the Parliament complex were shut down and protesters were told they wouldn’t be allowed within blocks of the building. 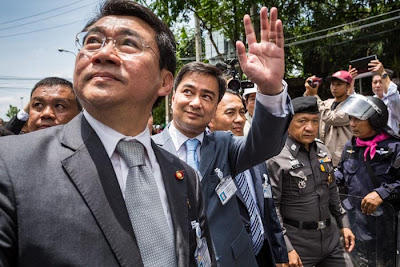 Former Prime Minister Abhisit Vejjajiva waves to supporters as he walks to the Parliament building.

For their part, protesters apparently took police at their word. Police estimate that 2,500 protesters showed up (though protesters insist they had a lot more there), which by Bangkok standards is a very small crowd. Leaders of the Democrats, Thailand‘s opposition party, tried to negotiate with the police to allow protesters into the parliament complex but the police stood their ground, so the Democrats told their supporters to go home. And thus ended the protest.

A few people were arrested for throwing water bottles at the police, but this was a very low key protest.  It ended a lot more quickly and quietly than almost anyone expected. 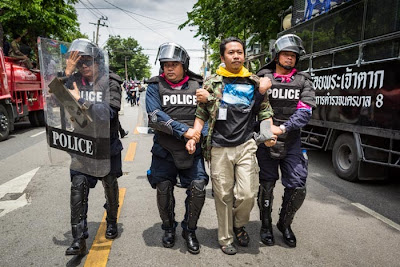 Police arrest a protester they suspect of throwing a water bottle at them.

There are more photos of the protest in my archive or available from ZUMA Press.
Finally, most of the photos in my archive are available for editorial use or self fulfillment as prints. If you see something you'd like to use or just hang on the wall, click on the "Add to Cart" button and follow the onscreen prompts.