Just Another Afternoon in Bangkok 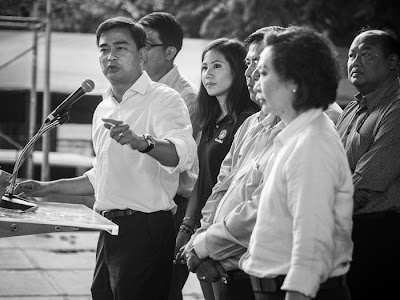 Abhisit Vejjajiva, former Prime Minister of Thailand, talks to a crowd of Thai Democrats in a working class neighborhood of Bangkok Monday evening.

This is a story that I suspect could only happen in Bangkok. Monday I went down to the Metropolitan Police offices to pick up a press credential. By the time I got off the Skytrain at Phayathai station it was raining so hard roads were flooded and sidewalks were impassible.

The driver deposited me at the police station and I picked up my credential. When I came out of the police station, the water had gone down. (Streets flood in Bangkok in a matter of minutes and dry out just as quickly.) Traffic was still backed up though and hardly moving. Since it was now rush hour, it would be hours before traffic was really moving. I decided to walk. I used the maps app on my iPhone to figure out where I was and where I roughly wanted to go, set my camera to record black and white jpegs (I also recorded color raw files so it was the best of both worlds)  and set out. 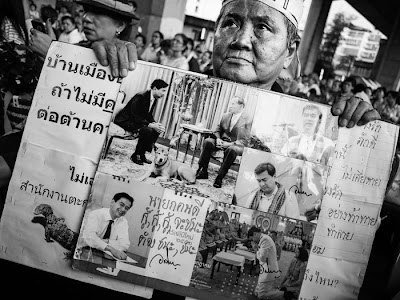 A woman listens to Abhisit. She's holding pictures of Abhisit talking to the King.

It turns out I was much further off the beaten path than I thought I was. I walked for about 45 minutes before I got to a part of town I recognized. I was crossing a street and I heard the unmistakable sounds of a political speech coming out of loudspeakers. I had nowhere else to go and nothing else to do so I followed the sound and ended up at a small stage under an elevated expressway at a Thai Democrats rally. 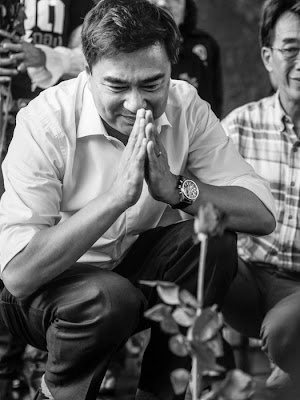 Abhisit accepts flowers from people in the audience.

When the PM came off the stage he was mobbed by people who wanted autographs or pose for pictures. I made a couple of more photos of him mingling. He got into his Mercedes and drove off. 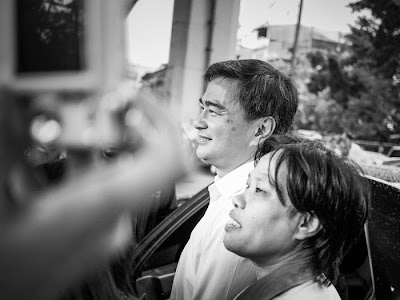 Abhisit, center, poses for photos with supporters after his speech.

With the former PM gone and the light fading I set off in search of a Skytrain station. Even though I was in a neighborhood that was new to me, I knew exactly where I was and the nearest Skytrain was about 20 minutes away.

I got to the station, caught the train and was home in 40 minutes. It was a great afternoon. Only in Bangkok could I go on a walkabout, get lost, run into the former Prime Minister and leader of the political opposition, photograph him and keep going and have it just be another day in the big city.

There are more photos of Abhisit in my archive.

(A color slideshow of the photos I made yesterday:)
Finally, most of the photos in my archive are available for editorial use or self fulfillment as prints. If you see something you'd like to use or just hang on the wall, click on the "Add to Cart" button and follow the onscreen prompts.