Another Protest, Another Sunday 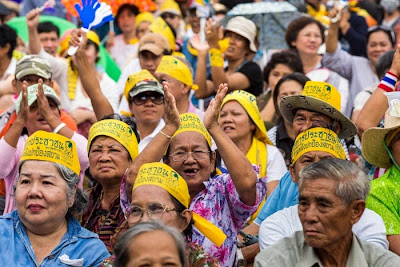 The Pheu Thai controlled Parliament is expected to take up discussion of amnesty bills in the coming week. There are five or six (possibly seven) amnesty bills being proposed. Some are more wide ranging than others. Some would grant amnesty to Thaksin Shinawatra, the revered leader of the Red Shirts (and reviled by Yellow Shirts), others would grant amnesty to Yellow Shirt "heroes" who helped topple the Thaksin government in 2006 (those heroes are villains to the Red Shirts and Pheu Thai).

The only thing that's certain is that it is going to be a contentious time in the Thai Parliament. All sides are staking out their turf in the courts of the street. Sunday, the anti-Thaksin forces had a rally to kick off their opposition to any bill that would give amnesty to Thaksin. Calling themselves "Pefot" ( the People's Democratic Force to Overthrow Thaksinism), they are mostly Bangkokians opposed to Thaksin and any vestiges of his rule, including in some very personal ways, his sister, Yingluck Shinawatra, the current Prime Minister (who acknowledges that she consults with her exiled brother on many issues).

For their part, the Red Shirts have said they will defend the Pheu Thai government and promise to come to Bangkok from their bases in the provinces if the anti-Thaksin forces pose a threat to the government.

If you follow these developments from outside Thailand, you might think it's a country in political gridlock.

In reality, that's not true. Pheu Thai (the ruling party and inheritor of Thaksin's mantle) has an absolute majority in Parliament and they control the Prime Minister's office (Thailand's parliamentary democracy is built on the British model where the party that controls Parliament also control's the PM's office). So they can propose, pass and sign legislation. In Thailand, it's impossible for a small band of obstructionists in the political minority to take the government hostage.

Most Thais, especially in the countryside, support Thaksin and whatever party he controls (his political parties are sometimes banned by the Thai courts - a process the Red Shirts call "judicial coups"). So when a government falls, whether by military coup or legal proceedings, a caretaker government takes over and calls a new election. Thaksin organizes a new party (from his home in exile in Dubai), the new party runs in the election and wins. Even though it seems chaotic to the outsider (and that's the way it's reported by the international media), there's a certain continuity to it.

Finally, I sense that Thais are weary of the political soap opera. They want their government to tackle the serious issues facing Thailand.

Thailand lost its role as the world's leading rice exporter, which was a point of pride to many Thais (it's important to note that it lost the rice export title because of internal politics and economic policies not because of crop failures or for natural reasons). Its economy, the most robust in mainland Southeast Asia, is threatened by the Vietnamese and Malaysian "tiger cubs." Thailand's tourism sector faces new competition from Myanmar (Burma), Cambodia and Laos.

Thais are well educated and versed in world affairs, they see what's happening around them and know that in order to compete they need to keep their own house in order.

Thais take a huge amount of pride in their history and what they've accomplished. They want to be the number 1 rice exporter, the dominant manufacturing center for Asia and the leading tourist destination. And they know these things will only come with stability.

Finally, no one, not the Red Shirts, not the Yellow Shirts, not the Thai Democrats, not Pheu Thai, no one, wants a repeat of the political violence in 2010 when the Army attacked Red Shirt protestors. Nearly 100 people were killed during the 2010 crackdown that shocked Thailand and the world.

There are more photos of political issues in Thailand and Sunday's rally in my archive.
Finally, most of the photos in my archive are available for editorial use or self fulfillment as prints. If you see something you'd like to use or just hang on the wall, click on the "Add to Cart" button and follow the onscreen prompts.