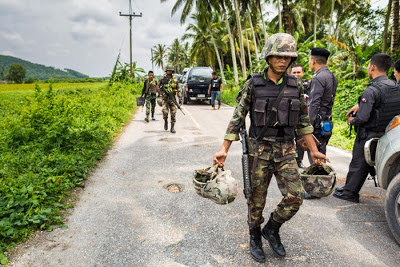 A Thai soldier carries the helmets of his colleagues to a waiting truck after their vehicle was destroyed by an IED in Pattani.

We were driving from Narathiwat to Pattani Monday to cover the start of Ramadan when we got a call about a roadside bomb attack on a Thai army unit. The soldiers had just finished a mission to provide protection to teachers and were headed back to their camp when an Improvised Explosive Device was detonated beneath their vehicle. All eight aboard the truck - a "soft skinned" vehicle - were injured when it careened off the road and ended up in a dry canal.

Such attacks are commonplace in southern Thailand. Insurgents bury a bomb under a roadbed and detonate it when a military vehicle passes over it. If there's time and the body count is high enough, they'll finish the attack with small arms fire and then steal the soldiers' equipment. When there isn't time, or the soldiers are able to put up a resistance, the insurgents melt into the jungle. After this attack in Pattani, they melted away into the jungle. 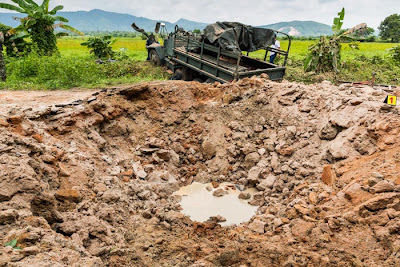 The truck rests against a tree in a dry roadside canal. The explosion destroyed the truck and the crater left road impassable.

In this case, the soldiers were returning from a teacher protection mission. Some of the extremists target noncombatants, like public school teachers and Buddhist monks, so the Thai government has assigned military units to accompany teachers on their way to school and monks on their morning alms rounds. One of the most jarring things about working here is watching the monks go out of their morning alms rounds with M16 toting bodyguards.

Other insurgents don't target the noncombatants, but do target the soldiers. That's what happened in this case. 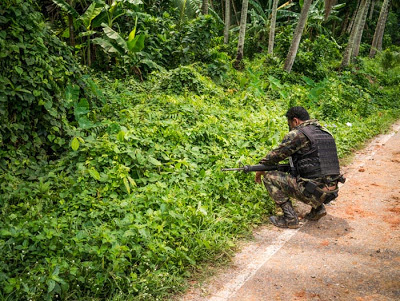 A soldier at the side of the road after others in his unit were injured by the IED. He responded to the attack and was not on the truck.
Finally, most of the photos in my archive are available for editorial use or self fulfillment as prints. If you see something you'd like to use or just hang on the wall, click on the "Add to Cart" button and follow the onscreen prompts.