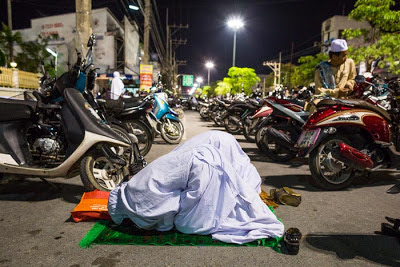 Women pray on the street, among parked motorcycles, at Pattani Central Mosque in Pattani, Thailand.

Ramadan started this week. It is the month the Holy Quran was revealed to the Prophet Mohammed and the most sacred month in the Islamic calendar. (Ramadan is also the name of the 9th lunar month.)

Muslims observe Ramadan by fasting during daylight hours. They eat breakfast before sunup and don't eat or drink anything again until after dark. In the tropics, that means about 13 hours (sunrise in Bangkok today was 5.55AM, sunset was 6.51PM) but it in the more northern parts of the northern hemisphere it can be 15 or 16 hours. Sunrise today in London, for example, was 4.56AM and sunset at 9.15PM for 16 hours 19 minutes of daylight. And fasting means no liquids, including water. 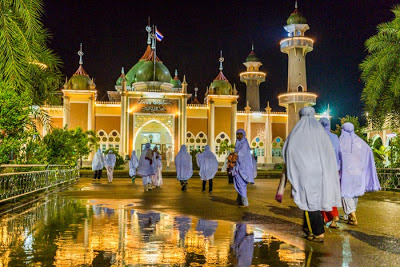 Women walk into Pattani Central Mosque for Ramadan services during a rain storm earlier this week.

It takes a lot of concentration and self control to go 16 plus hours with no food or liquids, including water. It takes a lot of self control to go the 13 hours of Bangkok daylight without food or water. I'm not Muslim and I don't fast during Ramadan, but I do respect the religion. I don't eat or drink when I am in public in Muslim majority southern Thailand. (I keep tea and water in my hotel refrigerator and get some small snacks from a Buddhist owned convenience store near the hotel.) 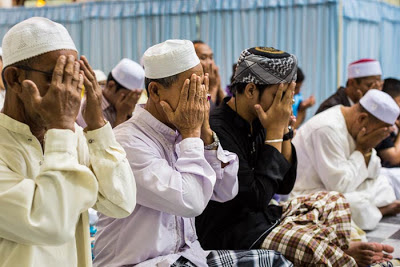 Men during Ramadan services earlier in the week.

Ramadan services at the Pattani Mosque Thursday night were beautiful. The Mosque was packed - so full I couldn't get in, so I photographed services from the outside of the Mosque. I was told there were about 15,000 people at the service, so I had plenty to photograph. The crowd spilled out of the grounds of the Mosque and onto the street in front.

There are more photos from Ramadan in my archive.