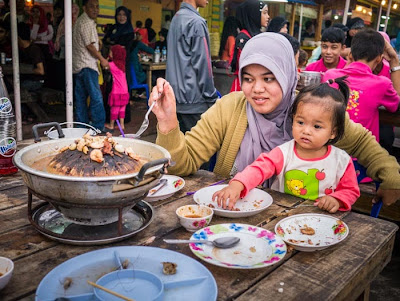 A Muslim woman and her daughter at a barbecue stand in Pattani.

I really enjoy traveling in the southern Thailand - I've never had a bad experience and I'm touched by the hospitality of the people I've met there. At the same time, you can't deny the violence in the south.

It's hard to write about Pattani and Thailand's "deep south." I don't want to blow the violence out of proportion but you can't ignore it.

When I tell people in Bangkok (or the US) that I'm going to the south, they look at me like I'm crazy. The first response is "Why?" followed by an admonition that I shouldn't go; that it's too dangerous for a foreigner to travel there. The violence, which is bad by Thai standards, is not nearly as bad as other places I've worked, including almost any large city in the US, where easy access to firearms means you never know what you're walking into.

In fact, I feel much safer at the scene of a roadside bombing in Thailand than I did at gang shootings in Phoenix. Part of it is the knowledge that if I'm hurt in Pattani, it's because I'm essentially collateral damage, in the wrong place at the wrong time.

In the US, that's not the case. I was assaulted by a Tea Partier protesting during a public rally at the Arizona capitol. Law enforcement at the Occupy protests in the US seem to delight in assaulting and arresting journalists. 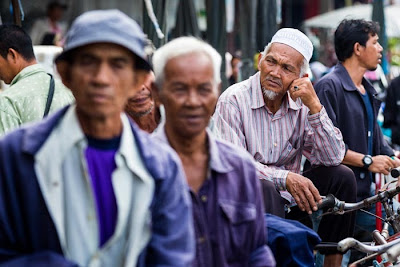 Pedicab and tuk-tuk drivers wait for customers in Pattani.

I am conflicted about traveling to the south.

On one hand, I think it's a really interesting part of Thailand. The religion, culture, food, language, are all different from the rest of the country. On the other hand, the violence, when it happens, can be spectacular (a roadside bombing destroys a military vehicle, a drive by shooting killed six, including a two year old) and that's what grabs the headlines. 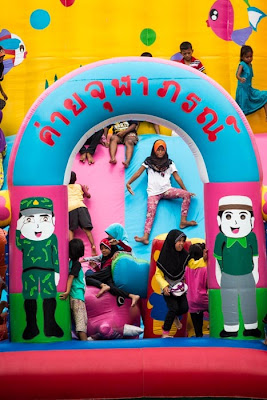 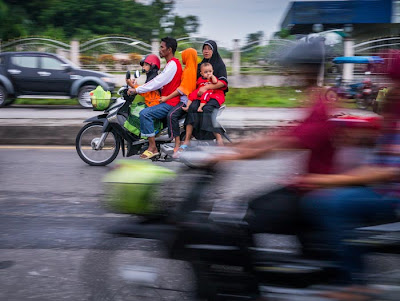 A Muslim family on a motor scooter.

Put into that perspective, traveling in Pattani and Thailand's south doesn't seem so dangerous. That's not to diminish what's happening. The situation can't go on forever, the longer it does the more inured people become to it and it becomes an accepted part of daily life.

I don't think you can assess blame exclusively on one side or the other. 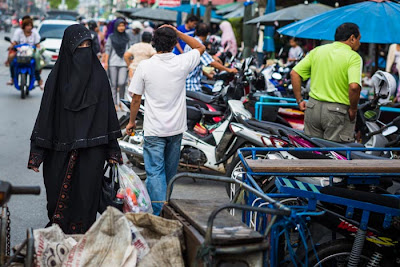 A woman walks through the market in Pattani.

Thais are very tolerant of other religions, but tolerance doesn't always extend to understanding, especially in the Muslim majority south. The Thai government has not always respected the heritage of the Muslims in the south. Road signs, for example, are in Thai and English but not in Yawi, the Malay based language spoken in southern Thailand. (This is changing, on my last visit I saw more road signs in Yawi than I had in the past.)

The government's response to the violence has, at times, been heavy handed.

In October, 2005, at least 84 people died when Thai authorities made mass arrests at a protest and threw the arrestees into locked trucks for a several hour trip to a military camp. The dead suffocated in the backs of the trucks. In April, 2004, 32 militants were killed when Thai security forces attacked the mosque they were sheltered in.

In both cases, allegations of excessive force were levied against security forces. 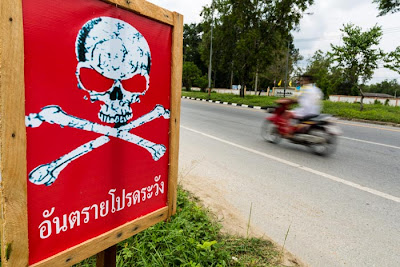 A handmade signs warns of dangers on a main highway in Pattani province.

At the same time, militants attack "soft" targets. Monks on their morning alms rounds. Teachers on their way to school. Farmers in their fields. People sitting in front of a grocery store. 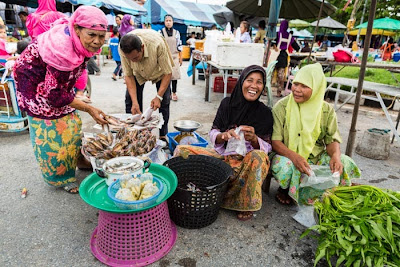 A market near Krue Se Mosque in rural Pattani.

Traveling in the deep south is a surreal experience. Buddhist monks go out on their morning rounds accompanied by soldiers with M16s. The beaches are some of the most undeveloped and stunning in Thailand, but the fear of violence keeps most people, including some locals, away. There are checkpoints and roadblocks throughout the southern provinces.

The blessing (if there can be a blessing in a situation like this) is that the violence hasn't spread to other parts of Thailand. Flying in and out of Narathiwat (the airport that serves the three southern provinces) is no different than flying in and out of any other airport in Thailand. Security is very light, you leave your shoes on and your laptop stays comfortably nestled in its bag. Muslims in Bangkok and other parts of Thailand have not been targeted by Thai authorities (compare that to post 911 US and UK where mosques are frequently surveilled by law enforcement).

The situation in the south is a complicated one. I don't know what the solution is. I fear that the longer it goes on, the harder it will be to find a peaceful solution. My nightmare is that some incident in the south will spark a wider confrontation that spreads to other parts of Thailand. That would be a disaster for everyone - not just people in the south, but all of Thailand. 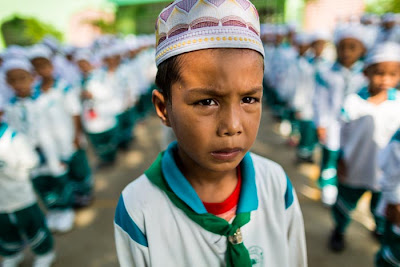 A Boy Scout at a private Muslim school in Pattani.

Finally, most of the photos in my archive are available for editorial use or self fulfillment as prints. If you see something you'd like to use or just hang on the wall, click on the "Add to Cart" button and follow the onscreen prompts.
Posted by Jack at 22:55