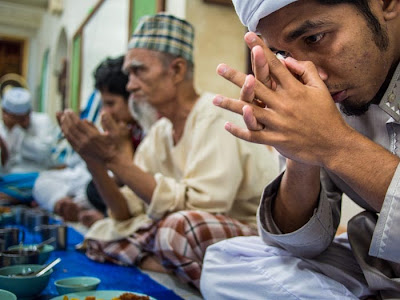 A man prays before eating the iftar meal at Haroon Mosque in Bangkok.

When I got to the mosque, I went back to the kitchen and talked to the dinner's organizer. I asked if I could photograph iftar. He remembered me from my first visit and said that of course I could photograph the meal, but that I should also join them and eat. It was sort of the invitation I'd been dreading because although their food is outstanding and the company really interesting, I discovered that the meal itself is quite short, so I told him that I would like to but that last time I ate too much and didn't photograph enough and so I needed to concentrate on the pictures. He laughed and gave me his blessings to photograph.

I was happier with the photos this time. The crowd was much smaller, about half the size of the crowd during my first visit, but people were just as gracious and I received just as many invitations to dinner. I did sit and eat a few bites but mostly I photographed the meal.

There are more photos from Iftar and Thai Muslim life in my archive.
Finally, most of the photos in my archive are available for editorial use or self fulfillment as prints. If you see something you'd like to use or just hang on the wall, click on the "Add to Cart" button and follow the onscreen prompts.