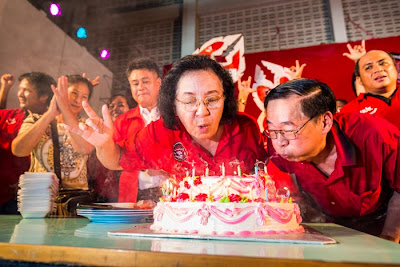 Tida Tavonseth (center) the president of the UDD (United front of Democracy against Dictatorship aka the "Red Shirts") and other Red Shirt leaders blow out the candles on a birthday cake for deposed Thai Prime Minister Thaksin Shinawatra during a birthday party for Thaksin Saturday night.

The Red Shirts threw a great party last night. It was the 64th birthday of deposed (and exiled) former Prime Minister Thaksin Shinawatra. The Reds rented a school and hosted a great party for the one man everyone knew couldn't attend.

Thaksin hosted a birthday fete of his own in Hong Kong. Most of the leaders Pheu Thai (the political party his sister, Yingluck Shinawatra, heads up in his absence) and many leaders of the Red Shirts went to that party. Most of the people at the Bangkok party were "regular" Red Shirts. 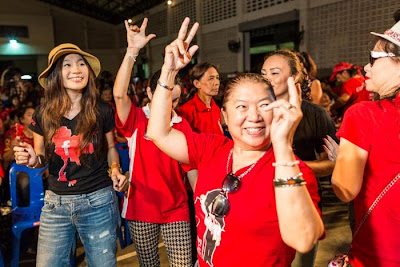 Women dance to the music during the birthday bash for Thaksin.

The party was a lot of fun. Sanuk is a Thai word I've written about quite a bit. It doesn't have a direct translation into English. It translates more into a philosophy meaning enjoy yourself and have fun at whatever you're doing. Last night's party (and a lot of the Red Shirt protests) was a perfect example of Sanuk.

As I was walking into the party, people stopped me to express their anger towards the Thai Democrats (the party they accuse of deposing Thaksin and the party that ordered the 2010 crackdown). They spoke with contempt of the coup against Thaksin and hatred towards Abhisit Vejjajiva, the Democrat Prime Minister in 2010.

(I've found the quickest way to establish my bona fides with Red Shirts is to show them my photos from 2010. I keep a selection of photos from the protests and crackdown on my iPhone.)

But as soon as I crossed the threshold into the school gym all was forgotten and it was party time. And it was a great party. 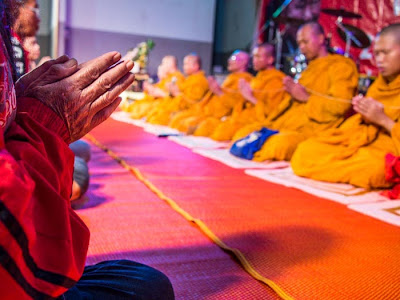 A Red Shirt, left, joins in a merit making ceremony that opened the party for deposed Prime Minister Thaksin Shinawatra.

The festivities opened with a merit making ceremony followed by a dinner. There was everything from som tom to curries to soups to deserts. I was trying to photograph the dinner and people, complete strangers, were bringing me bowls of curry, plates of som tom, fish, chicken, soups, Thai deserts you name it. At one point I was trying to balance three full plates of food and two cameras while I photographed. I gave up on the photography and sat down to enjoy dinner. (This happens a lot at events in Thailand.)

After dinner, the main event - the real party part of the party started. 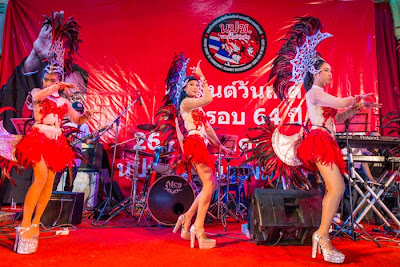 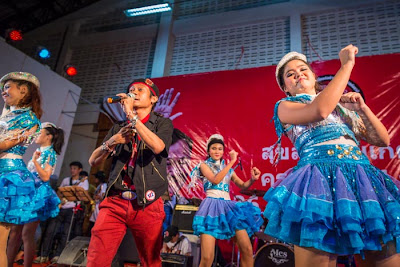 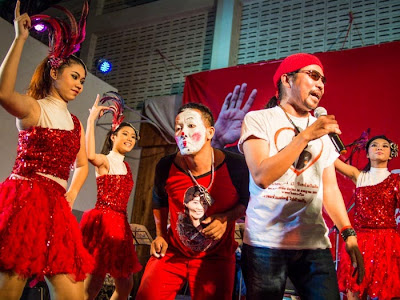 The entertainment was a sort of a PG rated Las Vegas showgirl revue.

Seven or eight young women in towering heals and bright, glittery outfits danced behind Thai singers while people danced in a small space in front of the stage. I was the only foreigner (including the only foreign journalist) at the party and when the revue started the party veered sharply into surreal territory for me.

At the end of the night, several thousand Thais gathered around a small cake festooned with candles, sang "Happy Birthday to You" for Thaksin (in English) and Tida Tavonseth, the president of the UDD, blew out the candles on the cake (top photo). It seemed like the perfect ending to the night. 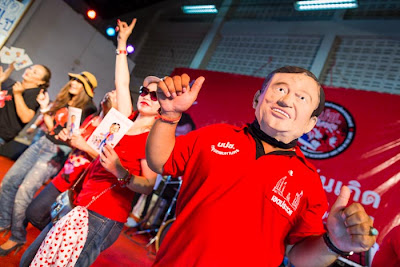 A Red Shirt in a Thaksin mask filled in for the exiled Prime Minister during the dancing last night.

There are more photos from Thaksin's birthday bash in my archive or available from ZUMA Press.

Finally, most of the photos in my archive are available for editorial use or self fulfillment as prints. If you see something you'd like to use or just hang on the wall, click on the "Add to Cart" button and follow the onscreen prompts.
Posted by Jack at 22:34