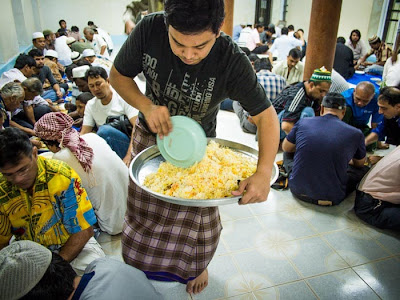 A man serves chicken biryani during Iftar at Haroon Mosque in Bangkok.

Last night I went to Haroon Mosque in Bangkok to photograph Iftar, the meal that Muslims eat to break their day long fast during Ramadan. It's usually a community event where anyone can just show up and eat. That last part is what tripped me up.

Haroon Mosque is in a neighborhood of old Bangkok close to the French Embassy and old Customs House (now a fire station) near the Chao Phraya River. It's one of the oldest mosques in the city and serves a small community of Muslims in the neighborhood. Although it's a relatively small mosque, because it's older and well established, it serves a large number of Muslim expatriates in Thailand. Tucked down a small soi (alley or lane) it is usually a beehive of activity that not many non-Muslims visit. 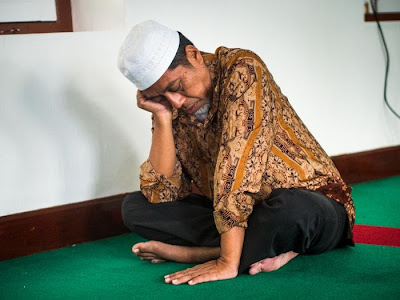 Praying in the mosque before Iftar.

I've been to Haroon Mosque several times. It's an interesting neighborhood and the eclectic mix of people at the mosque makes for interesting conversation and photography. When I got to the mosque late Saturday afternoon, I slipped off my shoes and socks and walked in. I was invited into the musallah (main prayer hall) and I made a couple of pictures, sat down and visited with three Thai Muslims and accepted their invitation to share Iftar. 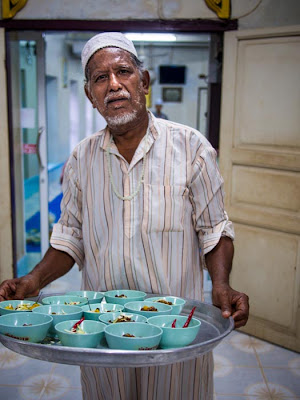 Bowls of soup for the Iftar meal.

Iftar is eaten right at sunset and since it's the first time all day that devout Muslims are able to eat or drink, it's taken the second the sun goes down. The meal is laid out and people sit down (at Haroon Mosque men and women take Iftar at the same time but separately). Prayers are read out in Arabic and translated to Thai over the mosque's loudspeakers, some people pray, others chat and then the second the sun has set people eat. 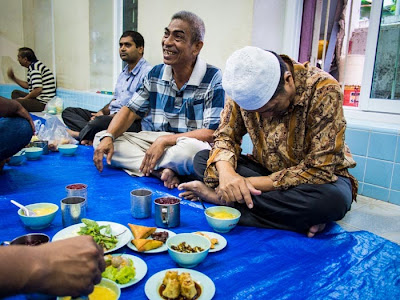 A man prays while his dining companions chat in the minutes before Iftar.

At Haroon Mosque the Iftar meal consists of a number of small dishes, a little like Spanish tapas. There were dates, samosas, a semi-spicy rice porridge, larb gai (Thai minced chicken with chilies and mint), vegetables, ginger tea and fruit drink. And all of it was delicious. Traditionally, the first thing eaten is the dates (modeled after the Prophet Muhammad, who broke his fast by eating dates), the other dishes are eaten in no particular order. 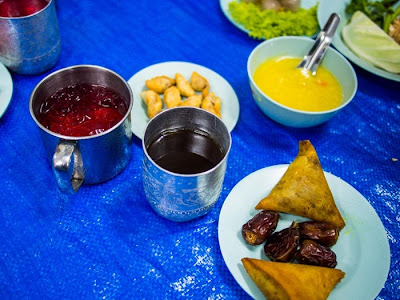 The Iftar meal, the dates are nestled between the samosas, in the lower right.

After Iftar, people return to the prayer hall for evening prayers, which last 25-35 minutes and then return to the dining halls to finish the evening meal. 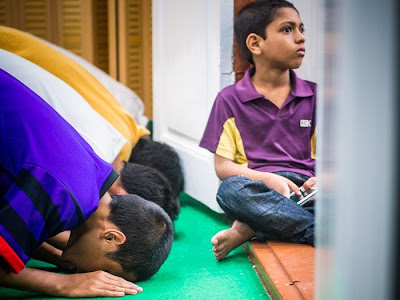 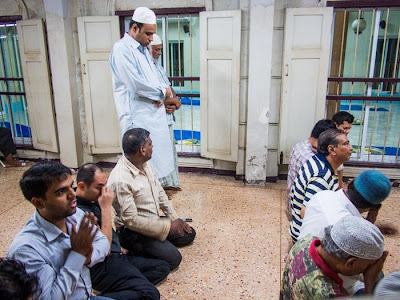 Men pray after Iftar and before dinner. 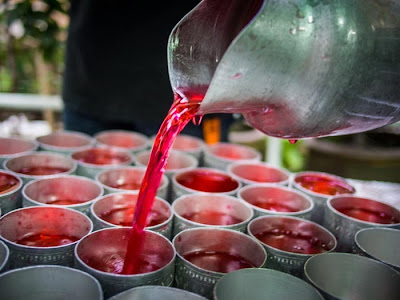 Fruit juice is poured before Iftar.

My plan last night was to photograph Iftar, not to participate in it. But things don't always go according to plan. I shared Iftar with the Thai Muslims who invited me into the mosque, but everywhere I turned I was invited to eat and it would have been rude to turn down the invitations. As a result, I only made a couple of photos last night.

I had a great time though, enjoyed some wonderful food and was touched by people's hospitality. I will make another effort to photograph Iftar later in the week.

Finally, most of the photos in my archive are available for editorial use or self fulfillment as prints. If you see something you'd like to use or just hang on the wall, click on the "Add to Cart" button and follow the onscreen prompts.
Posted by Jack at 07:00