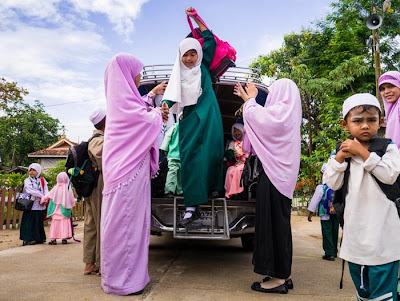 A girl gets off a "school bus" at a private Muslim school in Pattani. The bus is a pickup truck with a couple of bench seats in the bed.

The gap between Muslim and Buddhist in Thailand's deep south is perhaps most visible in the schools. More and more private Muslim schools are opening in the south and parents are sending their children to those schools. 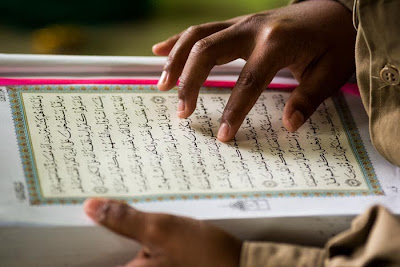 A boys hands move over the script in the Koran he's studying at the Pattani Muslim school. 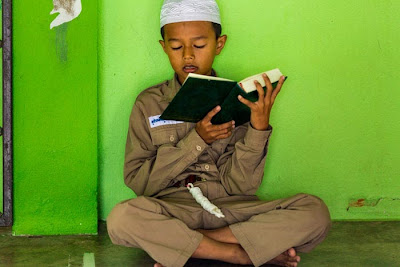 A boy reads the Koran during religious instruction at the Pattani Muslim school.

Most of the schools are licensed by the Thai government and teach the official Thai curriculum. Their students have to take the Thai standardized tests. The biggest academic difference is that the Muslim schools teach a curriculum that meets Thai government standards but fulfills Islamic requirements. 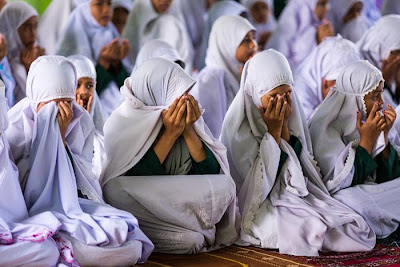 Girls pray at the Muslim school.

Students pray on the regular Islamic schedule in the Muslim schools, but only at lunch or recess in the public schools. 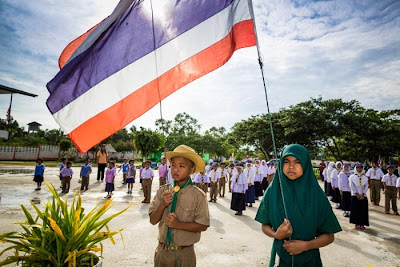 Students at a public school raise the Thai flag.

One of the reforms Muslims have won in the south is the right to dress their daughters the way they choose. Before the current unrest started, students in the south dressed like students elsewhere. Girls in the public schools didn't wear the hijab and they wore the shorter skirts used elsewhere in Thailand. 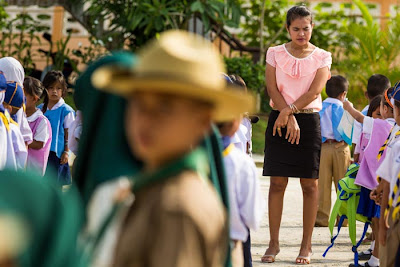 A Buddhist teacher walks among the students at a Pattani public school.