A Disaster in Slo Mo 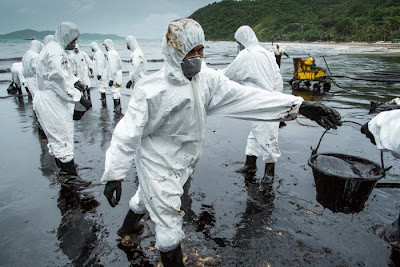 Workers on Ao Prao beach use buckets to remove oil from the surf.

On Saturday, July 27, an underwater pipeline off of Rayong province in southeastern Thailand sprung a leak. Officials say 50,000 liters of crude oil poured out of the pipeline before it was shut down. Skeptics say a lot more oil was released.

The oil spill was announced Sunday. Officials said everything was under control and the oil was not expected to make landfall or foul any of the pristine beaches on nearby Koh Samet island, a very popular weekend getaway for people who live in Bangkok, Thailand's teeming capital city.

Officials were wrong. By Monday, July 29, oil was washing up on Ao Prao, a secluded beach on Koh Samet. By Wednesday, July 31, Thai officials announced that the slick was larger than the island of Koh Samet, that the situation was essentially out of control and requested international help in reining it in. 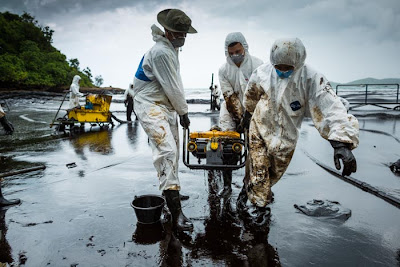 Workers haul a pump out of the surf.

I went to Koh Samet Tuesday to photograph the cleanup efforts. When I was on Samet, the spill was limited to the area around Ao Prao, on the west side of the island and the rest of the island was humming along like it always does.

The island is about 2.5 hours from Bangkok. You drive to Rayong and take a ferry from Ban Phe to Koh Samet. I got to Ban Phe about 07.15AM and learned the ferries didn't start running until about 08.00AM. A Thai TV crew showed up while I was waiting and I chatted them up to see if they were interested in splitting a speedboat to the island (the ferries cost about $3US, speedboats are about $100 and out of my price range, but a three person TV crew and I brought the per person rate down to $25, something I could afford). The TV reporter told me the Thai navy was loading up at a pier down the street and she was going with them. So I went to the Navy's pier with her and hitched a ride with the Thai navy.

The navy's boat was not a passenger ship. It was a gun boat. There were no seats per se on the boat, just a couple of lawn chairs and deck space around the guns. It was very overloaded and uncomfortable. But it was immediate and free. 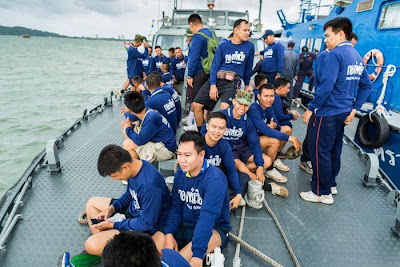 Thai sailors on the deck of the patrol boat.

This is Thailand and things are different here. For journalists working in the US you may be thinking I talked to a PIO or ranking officer. You'd be wrong. I walked aboard the boat with the Thai sailors. No one suggested I didn't belong, in fact their commanding officer offered me one of the lawn chairs. It's a part of working here. Unlike in the US, public officials in Thailand don't think of the media as the enemy. We're there to do a job and Thai officials, in general, try to help us (or at least not get in the way) do that job. I always thought it was the way government was supposed to work. (That's been my experience here. Not all journalists have had the same experiences I've had.)

When we got to the island, we hitched a ride with the trucks the navy had chartered to get to the oil spill. The smell of the oil spill hit us before the site of the oil spill did. The road cuts through thick jungle (the island is a national park and relatively lightly developed), our convoy crested a small hill and the chemical odor of the oil spill rolled over us like a wave. It was immediate and noxious. 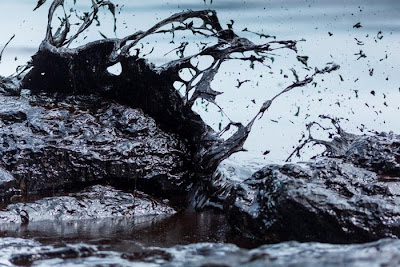 A wave of oil breaks on the rocks at Ao Prao.

We got to the resort officials were using as a headquarters (the spill came ashore a few meters from an exclusive beach resort) and the TV crew and I jumped out and went down to the beach while the sailors fell in for briefing and got kitted out with Tyvek suits and rubber boots. We worked in our jeans and tennis shoes. The sailors, and some of the media, used breathing filters because of the smell, but after about 10 minutes I didn't notice it so I just used my Cambodian krama as a filter (and as a hand towel and a sweat rag and a lens cleaner etc).

Officials at the spill gave us complete freedom of movement. There was an acknowledgement that we would stay out of the way, but that we also had a job to do and that if we hurt ourselves, well we should have known better. It's a refreshing way to work after spending 30 years in the US, where the first thing officials do is erect barriers to press coverage. 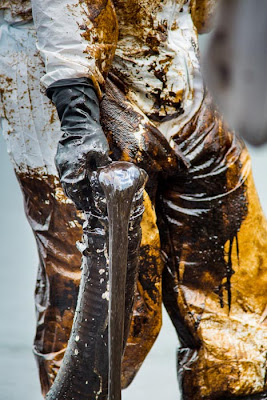 A worker standing in the surf holds a vacuum hose while oil gushes out of it. He was in the process of connecting it to another hose that in turn was connected to holding tank.

The media worked unimpeded while workers from PTT (the company that owns the pipeline and ironically unveiled their "green" campaign this week) and Thai military personnel cleaned up the oil. A few of workers chatted with reporters and photographers during their breaks. 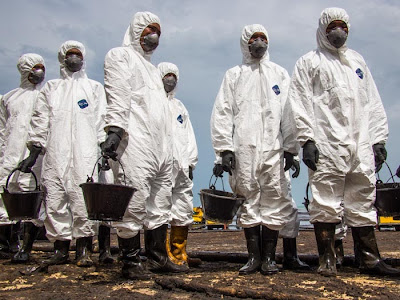 Thai sailors in Tyvek suits are briefed on cleanup procedures.

It sounds counterintuitive, but the scene was quite striking and, in a way almost monochromatically beautiful. The oil washing ashore was jet black, the workers were in white suits (many of which were covered in black oil) against the backdrop of ominous dark clouds (it is the rainy season). Plumes of oil broke over the rocks. It was black and white against a blue backdrop. It is a disaster, the scale of which is still unknown, but it was striking none the less. 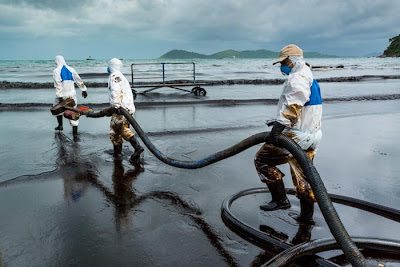 As the morning went on, more military personnel and media crews arrived and the beach became more crowded. Eventually representatives from PTT asked us to leave the immediate work area. But the perimeter was just off the beach, literally just a meter or so from where the workers were, and we could still see and photograph the work using wide angle lenses for vistas and telephotos for tighter photos.

I was one of the first media people to arrive Tuesday morning (a few had gotten to the spill Monday and spent the night on the island, but I was on the first boat to reach the island in the morning). By 11.00AM there was big media crowd at the cleanup and I was starting to repeat myself photographically, so I left the site and walked a short distance to where I could catch a pickup truck and  started the process of heading back to the mainland.

First I stopped at one of the open tourist beaches and photographed people on the beach to get that side of the story, the story that the island is still open. Then I went to Koh Samet's pier and caught a ferry back to the mainland and a taxi back to Bangkok. 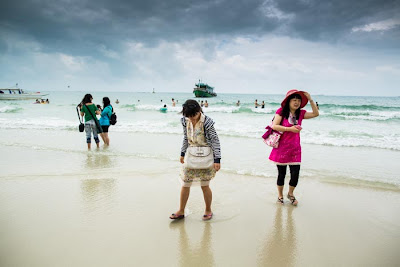 People on an open beach on Koh Samet.

I got back to my apartment about 5PM, so I was gone almost exactly 12 hours. I spent most of the cab ride back to Bangkok editing (I had my MacBook Pro with me) and by the time I got home, I just had to finish captioning and transmitting the photos to ZUMA.

There are more photos of the oil spill cleanup in my archive or available from ZUMA Press.
Finally, most of the photos in my archive are available for editorial use or self fulfillment as prints. If you see something you'd like to use or just hang on the wall, click on the "Add to Cart" button and follow the onscreen prompts.
Posted by Jack at 22:35