The Most Famous Gate in Myanmar 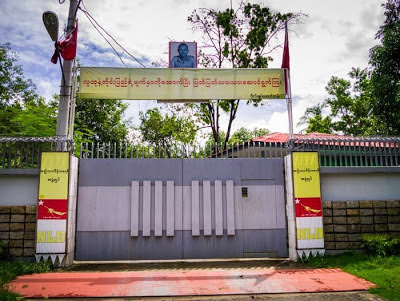 This is the first photo I made when I got to Yangon.

It's not much. It's just a photo of a gate, with a small black and white photo above it. But this gate is loaded with symbolism. It's the main entrance to the family home of Aung San Suu Kyi, Myanmar's democracy icon and a revered figure in modern Myanmar. The black and white photo is a portrait of her father, Gen. Aung San, credited as being the father of Burma's independence and to this day a national hero in Burma/Myanmar. He was assassinated in July 1947, six months before Burmese independence.

His daughter, Suu Kyi, became an important figure in modern Burmese history in 1988 when she stared down Burmese soldiers ordered to put down student pro-democracy activists in Yangon. She was sentenced to house arrest in the family home, behind the gate, for more than 20 years.

I didn't plan to stop at Daw Suu's (Burmese call her Daw Suu. Daw is a Burmese honorific for older woman, like Aunt) gate. I was in the taxi going to the hotel and we passed Inya Lake. I asked the cabbie if it was Inya Lake, he said it was and I said that means Suu Kyi lives nearby. Next thing I know, we're pulled up at the modest gate as traffic whizzed by.

I made a couple of photos of the gate, got back into the taxi and we went to the hotel.

This isn't much of a picture. It's a snapshot really. I didn't even give it any thought until I got back to Bangkok. Going through my photos from Yangon, I realized this is the first photo I made in Yangon, and the photo I made of Insein Prison, from the plane as I left Yangon, was the last photo. These are the only two "political" photos I made in Yangon. I don't know if it's synchronicity, fate, luck or what that the trip started with a photo of Daw Suu's home and ended with a photo of the place where she was imprisoned. 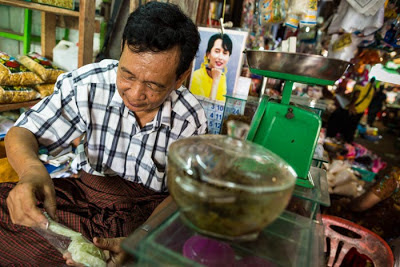 A market vendor in Pathein with a photo of Aung San Suu Kyi in his shop.

Daw Suu's picture hangs everywhere in Myanmar now. Her books are sold openly on the streets and in bookstores. The changes that have swept Burma in the last two years are mind boggling. Until recently, just stopping to photograph Suu Kyi's gate could get you arrested in Burma. Displaying her photo was taboo. There are still some restrictions on speech (criticism of the Burmese military is a tricky subject) and the permanence of the democratic reforms remain in doubt (though the doubt lessens with every passing day). But the winds of change are blowing and Burma (or Myanmar) will never be the same. And that's a good thing.