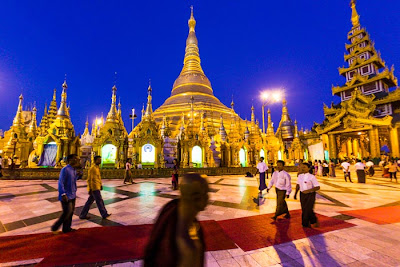 A monk (in foreground) walks around Shwedagon Pagoda in Yangon.

Shwedagon Pagoda is an awe inspiring place. It's the most important religious site in Myanmar. The 99 meter tall (well over 300 feet) gilded spire towers over Yangon and is visible in almost every corner of the city.

Burmese believe the Pagoda is more than 2,600 years old. It's one of the oldest religious sites in the world. Built 500 years before London was founded by the Romans, Shwedagon was a site of religious pilgrimage while London was not even a wide spot on an unnamed river on an unknown island. It predates New York by more than two millennia.

Shwedagon serves as more than "just" a religious center. It also has a powerful political history. It was occupied by British soldiers for 77 years while Burma was a British colony and featured prominently in Burma's struggle for independence from the British. In 2007, monks from the monasteries around Shwedagon, led the pro-democracy marches that rocked Myanmar. Democracy icon Aung San Suu Kyi comes to Shwedagon to pray. 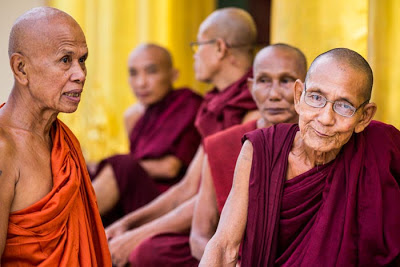 The complex is called Shwedagon, named after the main pagoda on the site, but hundreds of smaller pagodas and several prayer pavilions ring the main pagoda. Relics from four Buddha's including eight strands of hair from Gautama, the historical Buddha, are at Shwedagon.

A steady stream of Burmese come to Shwedagon to pray and make merit.

I was there at sunrise when a family led a procession around the pagoda stopping to pray at several points. I was there at sunset and saw women lighting tens of candles to make merit. Every couple of hours, volunteers pick up brooms and sweep the marble floor of the pagoda, making it nearly spotless (like all Buddhist temples in Thailand and Myanmar, visitors remove their shoes before entering the temple). 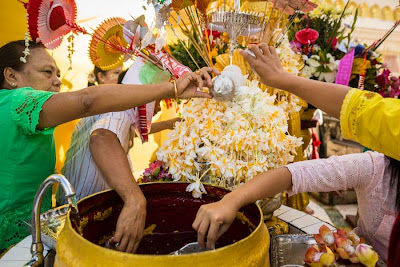 People bathe and make merit at a statue of a Buddha at Shwedagon.

I've been to lots of Buddhist temples and shrines throughout Southeast Asia. I've seen the Vatican, the Blue Mosque in Istanbul, the Basilica of Guadalupe in Mexico City. None of those places prepared me for Shwedagon. It's a humbling and inspiring place. To put it into a Western perspective, people were praying here nearly 1,000 years before the Vatican was built.

There are more photos from Shwedagon Pagoda in my archive.
Finally, most of the photos in my archive are available for editorial use or self fulfillment as prints. If you see something you'd like to use or just hang on the wall, click on the "Add to Cart" button and follow the onscreen prompts.