(With apologies to George Orwell) 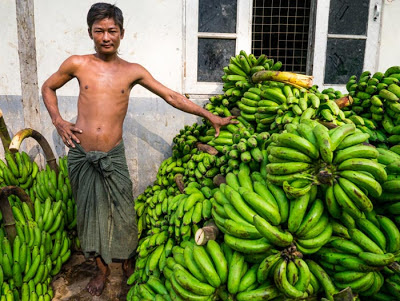 A stevedore near the docks with a load of bananas he unloaded from a riverboat.

Burma (Myanmar), or at least Rangoon (Yangon), exceeded all of my expectations. Yangon might be the best city in Asia for street photography, even better than Bangkok. The people, who have been locked in a sort of isolation by a xenophobic military dictatorship for more than 50 years, are witnessing freedom on a scale most have never seen. 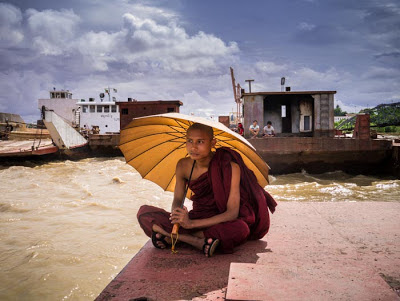 A monk on the riverfront.

At the height of the dictatorship, contact with foreigners was, at minimum, discouraged. Now people will stop you on the street to talk about the changes sweeping their country (although there still isn't much direct criticism of the military). Photographing in the markets and on the streets, the biggest problem I had was people who wanted to be photographed.

I would be photographing someone, like the stevedore at the top of this blog entry, and his buddies would want in on the act. Sometimes they'd "photobomb" me, but most times they'd poke me on the shoulder and ask me to photograph them. 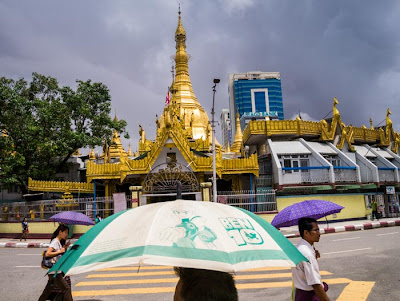 Sule Pagoda, the 2nd most important pagoda in Yangon.


People followed me through the markets, trying to catch a glimpse of the LCD on the back of the camera to see what I was photographing. Every once in a while, I would stop and show the crowd the pictures and people would burst out in laughter, occasionally running to find the subjects of my photos and drag them back to show them the pictures. There were lots of "thumbs up" gestures and smiles. 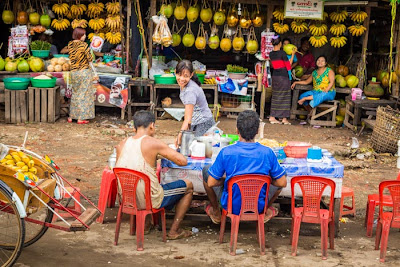 A tea shop in a Yangon market.

The architecture of Yangon reminds me a little of what I saw in Havana when I was traveling to Cuba 10+ years ago. Yangon has some of the finest colonial architecture left in Asia and, thanks to Myanmar's political isolation for the last 50 years, it's in pretty good shape - it hasn't been touched in 50 years and is in desperate need of a coat of paint, but it's still standing. Many parts of the city, especially in central Yangon and along the riverfront, have the air of grand old society dame, her fortunes are waning but she's still proud and she just knows that better times are ahead. 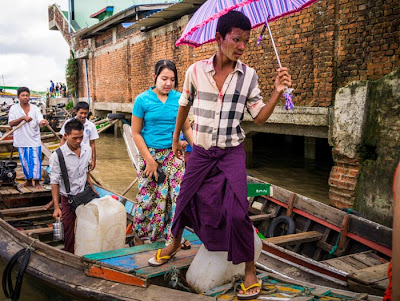 Passengers get off a river taxi. Foreigners are not supposed to ride the small cross river boats.

I've been meaning to travel to Burma since I read Emma Larkin's captivating book, "Finding George Orwell in Burma." Then I read Orwell's "Burmese Days" and I was hooked. Since then I've read Aung San Suu Kyi's "Freedom From Fear" and "Letters from Burma" and Thant Myint-U's "The River of Lost Footsteps" and "Where China Meets India." Now that I've been, I can't wait to go back. 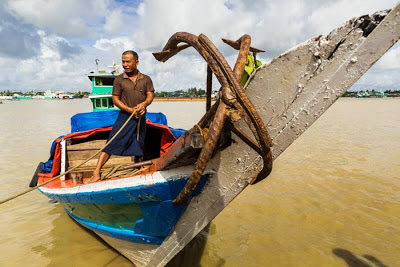 A river freighter docks in Yangon. 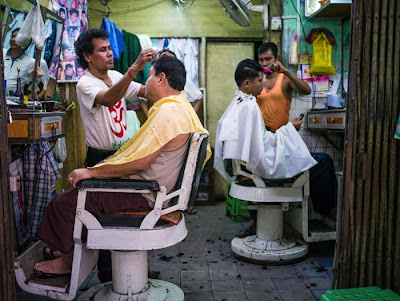 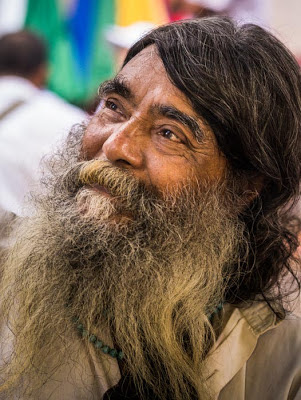 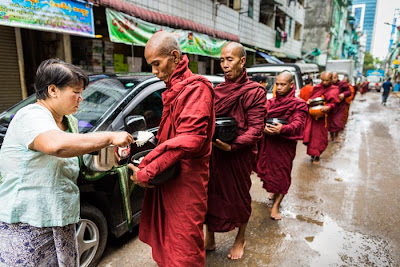 Monks on their morning alms rounds.

There are a lot more photos from Myanmar in my archive.
Finally, most of the photos in my archive are available for editorial use or self fulfillment as prints. If you see something you'd like to use or just hang on the wall, click on the "Add to Cart" button and follow the onscreen prompts.