(But then they never really left.) 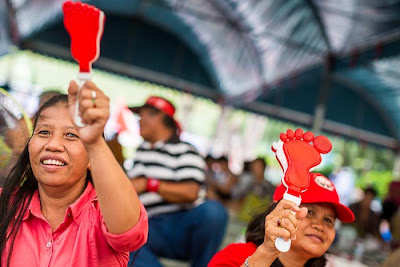 Red Shirt supporters use their clappers to applaud at a Red Shirt rally at the Thai Constitutional Court.

This is a complicated story.

The Thai Red Shirts, also known as the UDD (United Front for Democracy Against Dictatorship) are an outgrowth of the coup that ousted Thai Prime Minister Thaksin Shinawatra. Most of the Red Shirts are poor people from rural northeast Thailand, although their influence is spreading among the poor in urban Thailand.

The ruling Pheu Thai party, headed by Prime Minister Yingluck Shinawatra (she's Thaksin's sister) was elected based on its support in the Red Shirt communities (Pheu Thai and UDD are two different organizations but they have a lot of overlap).

Thaksin was ousted by a military coup in 2006. He was convicted of several corruption related crimes and rather than go to jail he fled the country and remains in exile, probably in Dubai but he jets around a lot and has several passports (like I said this is a complicated story). One of the ironies is that he could be a legally free man now if he had stayed in Thailand and served his sentence because his sentence was only a couple of years, although it remains open if he would have been convicted of other crimes his opponents have alleged he committed.

Critics of Yingluck's government and cynics allege that Thaksin is running the country via Skype from his hideout in Dubai.

Political violence in May 2010 left hundreds dead when the Thai Army attacked Red Shirt protesters in Bangkok. The Red Shirts had gridlocked Bangkok protesting the Thai Democrats' government (arch enemy of the Red Shirts). After two months of protests, including more than a month in Ratchaprasong Intersection, Bangkok's "Miracle Mile," the army went in, guns blazing, and forced the protesters out.

Pheu Thai and their Red Shirt supporters have made repeated calls for Charter (constitutional) amendments that would grant immunity to people convicted of political crimes after the 2006 coup, including Thaksin Shinawatra. This would allow Thaksin to return to Thailand a free man and presumably reenter politics, a thought that terrifies the wealthy urban elite.

For his part, Thaksin has said he has no desire to reenter politics, that he just wants to come home, a statement that is mocked by the urban elite. One of the many ironies in this ongoing story is that Thaksin is one of the richest people in Thailand but he is detested by the rich elite. His political home has been as a populist supporter of the rural poor and it's been alleged that his billions of dollars are funding the Red Shirt movement.

The Court is made up of conservative justices who support Thailand's wealthy urban elite, and is perceived as being anti-Thaksin. The justices have ruled that efforts to reform the constitution may, in themselves, be unconstitutional (like I said, this is a complicated story). These rulings have stymied efforts to reform the Charter. Which is why the Red Shirts are at the court.

They are demanding the justices' resignation (which is not going to happen) and threatened to make "citizens' arrests" of the justices (which will not be allowed to happen). They want the justices replaced with judges that are more sympathetic to their cause.

The roots of the protest lie in Thailand's explosive economic growth of the last 30 years.

Thailand is not quite a tiger and certainly not a BRIC, but it is a "tiger cub" and the most powerful economy in mainland Southeast Asia (Thailand, Malaysia, Laos, Cambodia and Vietnam), It also outpaces the Philippines and non-petroleum exports from Indonesia. The rich here have gotten much richer. The poor have also gotten richer (rural people here are doing much better than their counterparts in Laos, Cambodia, Vietnam and Myanmar).

This is a country of amazing and dispiriting disparities. There's a Bentley dealership in a shopping mall in central Bangkok. People live in a slum less than a kilometer from the mall and impoverished street vendors try to sell 20Baht (about .60¢ US) bottles of juice to shoppers rushing in to look at the $200,000 Bentleys.

The disparity is really at the heart of the protest. The poor see their opportunities being blocked by the very wealthy (and getting wealthier) elite while they struggle to make ends meet even as they accumulate more trappings of wealth, like smart phones, flat screen TVs and cars (or motorcycles).

I'm not sure what the long term implications of the court protest are.

The court building, site of the protest, is located quite a distance outside of central Bangkok. The protesters have been at the court for two weeks, but the protest doesn't register on the radar of most people in Bangkok because it's so far away. The protesters are not going to convince the justices to step down. They won't be allowed to make their citizens' arrests. So all signs point to a continued stand off.

The protest does illustrate Thailand's continuing political instability. World events, like the Arab Spring, overtook Thailand's 2010 summer of bloodshed but you don't have dig too far to hit a streak of instability.

Most people think of Thailand as the "Land of Smiles."

There is certainly a lot of truth to that stereotype. The Thai people are among the most gracious I've ever met. They like to have fun - one of the reasons their protests are so photogenic is that there is a party like atmosphere at most protests.

Fiery speeches are followed by dancing and music. Most protests have an area set aside for massages and there's always lots of food. How many protests in the US or Europe include massage and free Thai food? (Though, to be fair, it's just called food here and not "Thai food.")

The Red Shirts are in power now, but they fear their elected government could be snatched away on a whim by the elite. It happened in 2006 and 2008 (when the courts ordered Thaksin's anointed successor to step down because he also hosted a cooking showing called, I am not making this up, "Tasting and Grumbling.")

The Yellow Shirts, supported by the urban elite, fear Thaksin will return and that his populist policies will erode their power and bankrupt the country.

Some say the Red Shirts are nothing more than communists. That is not true. Thailand is a Buddhist nation. Thais are entrepeneurs. The last thing they want they want is a secular, state run economy. But every time there is a coup, whether real like in 2006, or perceived like in 2008, the Red Shirts become more radicalized and less willing to negotiate.

In 2010 I thought Thailand was on the verge of a civil war. I'm not as concerned about that now as I was then, but I do think Thailand's instability is going to continue to be an issue for years to come.

This is an amazing country but I sometimes shake my head in wonder at the politics here. I want to say to someone, anyone, that these political battles are destroying Thailand. That the Burmese, Cambodians and Vietnamese (Thailand's traditional rivals) are watching in glee as Thailand cripples itself with this political infighting. But I can't find anyone to listen.

I have lots of photos of Thai politics and politicians in my archive.

Finally, most of the photos in my archive are available for editorial use or self fulfillment as prints. If you see something you'd like to use or just hang on the wall, click on the "Add to Cart" button and follow the onscreen prompts.
Posted by Jack at 23:15