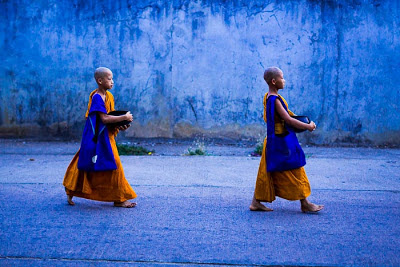 Buddhist novices walk down the street on the morning alms rounds in front of my guest house in Mae Sot.

Photographers usually "chase the light." We're famous for getting up while it's still dark out so we can be making pictures just as the sun comes up.

The truth is though, I don't chase the light much in Bangkok. When I get up at Zero Dark 30 to make pictures it's usually because I want to be in a market photographing when it's busiest. Bangkok's urban design - a sprawling city with an impressive skyline, means trying to photograph in "nice light" is difficult. Get to where you want to be before the sun comes up to discover that the sunrise is blocked by a skyscraper three or four blocks away. There are exceptions of course. There's guaranteed nice light on the riverfront and there's nice light to photograph morning exercisers in Lumpini Park but I've found that by and large nice light in Bangkok is a fleeting concept.

Even the markets, which are busiest when the light is nicest, don't offer nice light because most of them are covered. Some are in buildings but most are covered by awnings that hang out over the sidewalk and keep them in a semi-permanent gloom that changes very little as the sun marches through the sky.

None of which is true upcountry. Thailand's provincial towns are made up of mostly low slung three or four story buildings. Upcountry, it makes sense to chase the light.

This picture was made the morning I got up early to photograph a Buddhist holy day. I left my Mae Sot guest house before dawn - I saw the novices coming before I was even on the street. I made a few frames (less than 10) of them walking by me and they were gone. According to my Golden Hour calendar, the "Blue Hour" (which is really only about 30 minutes before sunrise) ended at 5.48AM and the EXIF data on the file shows the photo was made at 5.41AM. The wall the novices are in front of is white/gray. The blue color is completely caused by the time of day and the camera's preset color balance (daylight). The same scene at 8AM would be completely different and at noon even more different.