So This Is Burma? 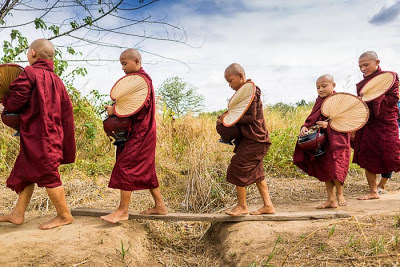 Burmese novices cross a wooden "bridge" in a field north of Mae Sot, Thailand but in Burma.

I've written quite a bit about why I walk as much as I can here. It usually pays off in nice ways for my photographs. I get a little lost and wander a neighborhood knowing I can't get too lost because I have my iPhone and its multiple maps and GPS apps.

Saturday in Mae Sot was no different. I took a motorcycle taxi down to the "Friendship Bridge" that is the border between Myawaddy, Myanmar (Burma) and Mae Sot, Thailand. I made a couple of pictures there and then walked down to the Rim Moei market. I was too early for the market, which hadn't opened yet, so I walked along the riverfront promenade. I went a ways down the promenade and decided to see what was what and go to the end.

I got to the end and it just ended. No signs, no warnings or barriers. Just a 10 foot drop from the cement promenade to the jungle floor. I could see a woman carrying water from the Moei River up to what looked like a village and a small, empty, market nearby.

My curiosity was piqued. I backtracked to a set of stairs, got off the promenade and walked down to the river to photograph the woman hauling water. I followed her into a village of thatched huts and a made a couple of pictures. The homes were simple huts. A couple had metal roofs but most were thatch from bottom to top.

This was a place of extreme poverty. Even the poorest Thai villages I've been in had some modern conveniences - wells, electricity, pavement - especially within walking distance of an urban area as large as Mae Sot. This place had none of those and looked like some of the Burmese migrant and refugee communities I've photographed around Mae Sot and Kanchanaburi province, to the south. I thought I had wandered into an unofficial refugee community and in a way I had.


I saw a group of Burmese monks gathering near a larger hut and walked over to photograph them. One of the monks spoke a few words of English. I asked if people had moved here to avoid the troubles in Burma and he said yes. Then he swept his arms in a circle and said "all Burma." I asked if everyone in the village was Burmese and he repeated "All Burma."

I asked if the novices (young boys studying at a monastery) were going on their alms rounds and the monk said yes. I asked if I could go with them and he nodded. So I followed the group as they walked through the area, their progress announced by boys ringing a prayer gong. Their circuit of the community took about an hour. As I photographed with my "real" cameras and my iPhone, I could hear the hum of traffic on pavement a couple of hundred meters to the east.

They ended their rounds at the "hut" they started at. The hut turned out to be the village temple and when we got back the abbot invited me in for a cup of coffee and a chat. I posed for photos with the monks (most of whom wanted to be photographed with the foreigner who wandered into their midst and then went on their walk with them).

The monk who spoke a little English pointed to a poster of the English alphabet and said he was the village English teacher. I asked if Thai authorities left them alone and he repeated, "All Burma." I asked how long they had been here and the question stumped him. I asked, "one year?" he said "yes," I asked "two years?" he said "yes." I felt like we were stuck in a loop. I don't speak a word of Burmese (and had forgotten my Burmese-English dictionary in Bangkok) and despite his role as village English teacher, his English was very limited. 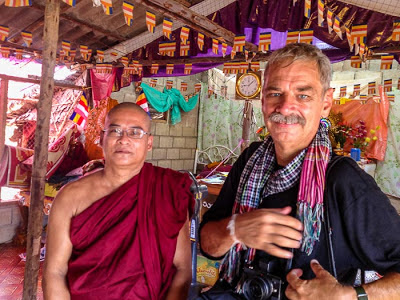 The village English teacher/monk and me in the temple.

I've had similar discussions in Cambodia and Laos. Someone who speaks a few words of English will remind me that one time the Lao Kings or Khmer Empire ruled some of what is now Thailand. (And I've had the opposite discussion in Thailand - Thais have reminded me that parts of what is now Laos or Cambodia were once Siam.) I thought the monk was giving me a history lesson, because in fact much of this area had at one time, in the 1700s, been ruled by Burmese Kings of the Ava court.

After our brief discussion I left the temple and wandered through the village photographing people and trying to talk to a few but the monk appeared to be the only one who spoke any English.

After a couple of hours I walked back to Mae Sot and took a motorcycle taxi back to my guest house to edit.

When I finished editing, I remembered the photos on the iPhone and imported them into my Lightroom catalog. The iPhone camera uses location services, which records GPS data with the photo. Lightroom version 4 has a mapping component (which I rarely use) that reads the embedded GPS data. Just for chuckles I used the embedded GPS data on the iPhone photos and LR's mapping mode and discovered I had spent the morning wandering around in Burma.

I was surprised by this because although I have a lousy sense of direction, I can generally tell when I've walked across a river and I knew for a fact I hadn't crossed any rivers on my walkabout. The border all through this part of Thailand is the Moei River. West of the river is Burma, east is Thailand. Don't cross the river and you don't cross into Burma. Except for a tiny piece of land about 200 meters from north to south and 400 meters from east to west. This tiny strip of land juts across the river and into Thailand. There are no border crossing points or immigration checkpoints. No customs inspections. Not even a sign that says "Welcome to Burma." Thailand ends and Burma starts. The pavement ends, dirt paths start. It's worth going back to. It turns out that when the monk was saying "all Burma" he meant this was, indeed, all Burma.

There are more photos of the community in my archive or available from ZUMA Press.