People rush onto the field at the end of the Royal Ploughing Ceremony in search of rice seeds sown by Brahmin priests.

The Royal Ploughing Ceremony was earlier today. The ceremony has been a part of Thai culture for hundreds of years - it reportedly goes back to the Sukothai period around 1300AD. In ancient times the court's Brahmin priests used it to presage the coming rice harvest. In modern times, it marks the beginning of Thailand's rice planting season, but the ancient traditions are still observed.

In the past, Bhumibol Adulyadej, the King of Thailand, presided over the ceremony. Health problems have limited the amount of time he spends out of the hospital and his son, His Royal Highness Crown Prince Vajiralongkorn presides over the ceremony now. Brahmin priests, who still play an important role in Buddhist Thailand's Royal Court, select the day and hour of the ceremony and officiate at it. Royal oxen plough a small piece of land on Sanam Luang while the Brahmins sow the area with blessed rice seeds from the royal seed bank. Watching the ceremony is a bit like opening a window into Thailand's past.


I tried to photograph the Royal Ploughing Ceremony when I was here in 2010. I went down to Sanam Luang early and got a media credential but since I am not Thai and wasn't properly attired I wasn't allowed to photograph the actual ceremony, only activities before and after.

There is a rich photographic tradition in Thailand and the King is an avid amateur photographer. Thais usually don't mind being photographed and they like to ham it up for the camera. This is is an amazingly easy country to photograph in.

Unless the royal family is involved. Then photography is very complicated. Only photographers credentialed to photograph the royals are allowed to, even at public events like the Ploughing Ceremony or Coronation Day. There is a strict dress code for photographing the royals - black suit, white shirt, solid colored tie. Black shoes. And there's no deviation from the dress code, even if it's 100F, photographers turn out in the black suit. There's a protocol involved in being around the royal family and not following proper protocol could be considered an insult. I've never seen foreign photographers in the royal press pool and don't know of any foreign photographers who routinely cover the royals. Which explains why my attempt to photograph the Ploughing Ceremony in 2010 didn't turn out to well.

For this year's Ploughing Ceremony I decided to skip the credential and didn't even try to get into the venue. I chose to cover the ceremony from the outside and sit with the thousands of Thais who attend to see the Crown Prince and reconnect with Thailand's agrarian past.

I went down to Sanam Luang very early, arriving at 5.30AM for an 8.00AM event. There was already a crowd around the venue, so I bought a plastic ground sheet and took a seat at the back of the crowd. I made as much small talk with the people around me as I could given that I don't speak Thai and none of them spoke English. A few people in front of me heard me struggling to say "it sure is hot out eh." (which by the way is "lorn mak mak" in Thai) and before I knew it they were laughing with me and pushing me to the front of the crowd. (I want to stress that I didn't ask to move to the front of the crowd - I was perfectly happy where I was. The Thais were being Thais, i.e. gracious and friendly, in pushing me, their guest, to the front.)

I took a seat on the grass in front of the crowd and kept making very, very small talk. Soon someone tapped me on the shoulder and offered me a couple of bottles of water. Then sticky rice. Then guava fruit. It was a portable feast. (Foreigners here are called farang, the Thai word for guava is farang, so when a foreigner eats guava there are all sorts of jokes about farang eating farang. And since farang, along with "lorn mak mak" is about the extent of my Thai, I get those jokes.)

It was brutally hot sitting in the open, even by 7.30AM. It's the end of the dry season here, and just about the hottest time of the year. Most people opened their umbrellas and created some shade. 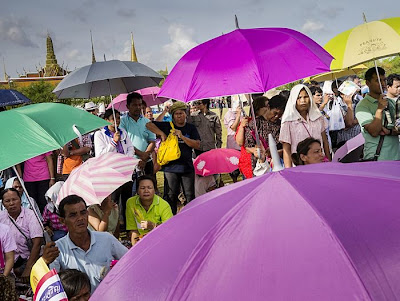 People wait for the Royal Ploughing Ceremony to start.

One of the protocol rules is that umbrellas are not allowed to be open in the presence of the Royals, so we knew the ceremony was about to start when police made the announcement that umbrellas had to be closed. Police also made a few other announcements in Thai, none of which I understood. But the officer nearest me started saying "farang, farang" and got on his radio. I figured immediately that his concern was caused by my cameras and I was right. The people seated around me, who had so graciously made room for me, very nicely asked me not to photograph. So I put my cameras away.

The people around me were very gracious. They made room for me at the front of the crowd, they fed me and made sure I had water. It would have been very disrespectful to photograph after they asked me not to, especially since I know the rules.

There were a couple of western tourists at the back of the crowd, where I started my morning. They were asked not to photograph by the same policeman who first expressed concern about me. They ignored him and started photographing which led to police shouting at them and causing a scene.

As soon as the ceremony ended, the crowd surged forward and climbed over, under and around the three lines of fencing that surrounded the venue. It's a part of the Ploughing Ceremony tradition that Thai farmers try to get some of the rice seeds, which come from the royal seed bank and are blessed by the Brahmins, to put in their fields. The amount of seed they get, maybe a handful of grains, is inconsequential to their yield but it's an important part of their tradition. So they scramble for the seed. 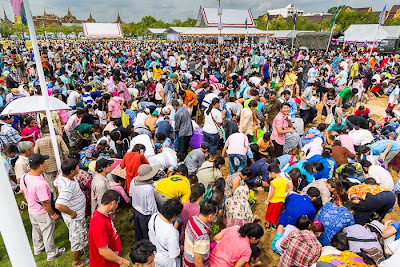 A part of the crowd looking for seeds sown by the Brahmins. This is about 1/4 of the crowd.

The seed scramble was the other reason I came to the Ploughing Ceremony. I was hoping to make one or two photos of the Brahmins and the oxen and then focus on the public scramble at the end. Since the scramble starts when the Crown Prince leaves, there was no problem photographing and I made a number of photos of people rushing in to get seeds and sifting through the sand for seed.

Although I was disappointed that I couldn't photograph the ceremony, I had a lot fun photographing the seed scrum afterwards and consider the day a success.

Finally, most of the photos in my archive are available for editorial use or self fulfillment as prints. If you see something you'd like to use or just hang on the wall, click on the "Add to Cart" button and follow the onscreen prompts.
Posted by Jack at 07:36