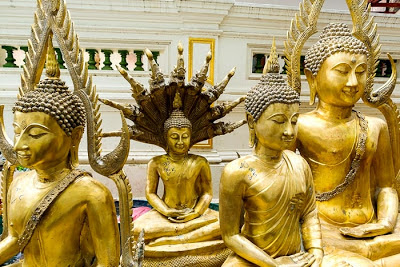 Buddha statues in an alley behind Bangkok's city hall building.

I usually have a plan when I go out to photograph. Even when it seems like I'm wandering aimlessly, I have an goal in mind. Sometimes I'm working on a story that requires a lot of back and forth walking, like the exchange rate with the Thai Baht and US Dollar. Sometimes it's a profile on a neighborhood, like Ban Krua, a Muslim neighborhood in Bangkok. Sometimes it's a news story, like the ongoing political protests that keep things in the Kingdom lively.

In most cases, my goal is to make a series of photos that relate to the day's theme or mission. 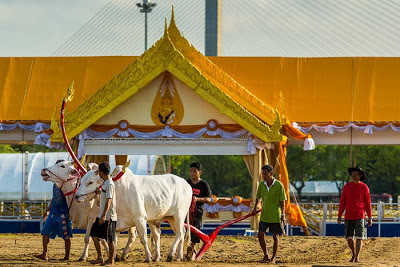 Rehearsal for the Royal Ploughing Ceremony at Sanam Luang Friday.

But sometimes things don't always work out exactly the way I had planned. Today was one of those days. My plan was to go to Sanam Luang, a large parade ground in front of the Grand Palace, and check out a Yellow Shirt protest. (The Yellow Shirts are anti-government and the arch rivals of the Red Shirts - think Tea Party and Progressive Democrats.) The Yellows were protesting in support of the Constitutional Court judges that the Reds had protested against earlier in the week.

The Yellow Shirts though weren't as motivated as the Red Shirts. They were sitting in their tents and relaxing, not doing anything that could be considered even remotely politically active. 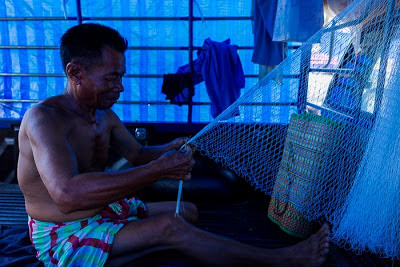 A Yellow Shirt supporter repairs his fishing nets in the back of his pickup truck while he waits for the protest to start.

I walked through the campsite a couple of times and made one of two pictures of people not doing much. I wandered over to where the royal oxen were grazing and photographed them as their handlers hitched them to an ornate plough and walked them through their paces in a rehearsal for the Royal Ploughing Ceremony, an important public event that celebrates Thailand's agricultural heritage.

After I photographed the oxen and the ploughing rehearsal, I ambled over to the front of the palace in search of something to drink. I ran into a group of monks on their morning alms rounds. I made a couple of photos of the monks, then bought a Thai iced coffee from a street vendor (espresso and condensed milk with sugar). 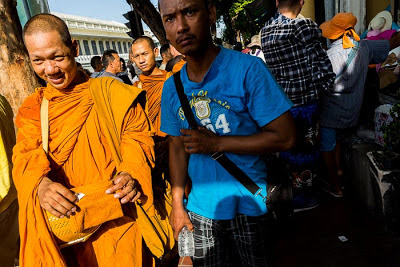 Monks on their morning alms rounds.

I photographed all morning, but rather than a story or photos with a theme, I ended up with a few individual frames that I rather like but no narrative to tie them together.