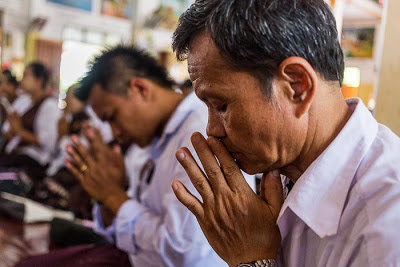 The Buddhist holiday of Visakha Puja fell on the Friday I was in Mae Sot. It's one of the most important Buddhist holidays celebrated in Southeast Asia, marking the birth, enlightenment and death of the Buddha.

I wanted to photograph Burmese immigrants celebrating the holiday in Mae Sot (Burma, like Thailand, is a Theravada Buddhist country), so I asked the manager at the guest house I was staying at which temple the local Burmese went to for the holiday. He gave me directions to a temple a little ways out of town and said I would have to find a tuk-tuk to get out there because it was too far to walk. And that I should arrive at the temple by about 6:30AM for a 7:00AM service. Which of course meant getting up very early.

I left the guest house before dawn and walked into Mae Sot town to find a tuk-tuk. I told the driver where I wanted to go, but he didn't understand my mispronunciation of the Thai so we tried to use Google's* maps app on my iPhone and that didn't go too well either.

But he was up for an adventure and we drove around asking random strangers if they spoke English. After a couple of stops we found a woman waiting to make an alms presentation to monks. She asked me which temple I was trying to get to and repeated it back to the driver** and we set off. Once we got out of town the driver was more willing to let Google do the driving and we used my iPhone to zero in on the temple.

I don't know where the guest house manager got his information, but there were no Burmese at the temple. They were all Thais. They were very gracious and invited me into the service. I made a couple of photos but it wasn't what I was looking for. When the service ended I walked back out to the highway and realized I had made a mistake by releasing the tuk-tuk driver when he dropped me off. I was in the middle of nowhere with nary a motorcycle taxi or tuk-tuk to be seen. I started walking back to Mae Sot, which according to Google maps was only 6 or 7 miles away.

After about 15 minutes a "songthaew" (a pickup truck configured as a bus) passed me and I chased it waving my arms like a lunatic. A Burmese monk in the songthaew saw me and banged on the roof to get the driver to stop. I hopped in and 30 minutes later was deposited in central Mae Sot. I visited some Thai temples but there wasn't much going on so I stopped for breakfast and coffee at a local restaurant.

I was getting ready to pay my breakfast bill and a couple of Burmese women in formal dress walked by collecting alms. Then a couple of more walked by and I thought it might be a procession. I put more than enough money to cover my breakfast on the table and rushed out to the street just as a procession of about 200 Burmese, all dressed in white, many carrying statues of the Buddha, reached the restaurant. My day was made. 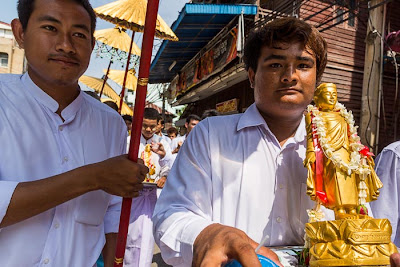 Burmese men carry statues of the Buddha during a procession to mark Visakha Puja in Mae Sot.

After about 45 minutes we arrived a large temple complex. Everybody filed into the temple and sat on the floor. I took off my shoes (I was the only one wearing shoes, the people in the procession all walked barefooted) and walked in with them. I was immediately invited to stay and a Burmese man with a camera came up to me and told me I could photograph freely, which I did.

After the service, I put on my shoes and was getting ready to head back to my guest house (by now I had filled a couple of compact flash cards and had quite a bit of editing to do) but before I could make a quiet exit a couple of surprisingly strong old Burmese women grabbed me and hauled me into their communal dining room and invited me stay for lunch. I stayed for lunch, which was a delicious assortment of Burmese curries.

When lunch ended I slipped out, put my shoes back on and walked back to my guest house.

A note about photographing religious festivals here. Theravada Buddhists wear white during important religious functions. At New Year's, important holy days, funerals, white clothes are the order of the day. I always pack a lightweight white shirt when I travel because I am never sure if I am going to run into an event that requires it. When I got to Mae Sot and checked my Thai holiday calendar (I subscribe to one in my Mac's Calendar app - formerly iCal - and keep it synched to my iPhone). When I saw that Visakha Puja day was coming up, I pulled the white shirt out and set it aside specifically for the day. I am obviously not Thai or Burmese and I think the Thais (or Burmese) assume that I am not Buddhist. They would probably let me photograph whether I was wearing white, blue or orange. For a foreigner it probably doesn't make any difference what color your clothes are, but I think it's important to respect the tradition as much as possible. So I never go on the road here without a white shirt.

There are more photos of Visakha Puja in Mae Sot in my archive or available from ZUMA Press.
Finally, most of the photos in my archive are available for editorial use or self fulfillment as prints. If you see something you'd like to use or just hang on the wall, click on the "Add to Cart" button and follow the onscreen prompts.

* Not an endorsement of Google's maps app. I've found that in big cities here Apple's maps app is better but the Apple Maps for Mae Sot just shows streets with no names. The temple I wanted to get to was on the Apple Maps app, but none of the streets were labeled and that would have confused the tuk-tuk driver more. Apple's not labeling streets makes no sense to me, which is why I fell back on Google's mapping app.

** Thai pronunciations are very tricky for non-Thai speakers. I told the driver I wanted to go to "Wat Mae Pa." Pretty simple - three one syllable words. But he didn't understand me. The woman asked me where I was going. I told her Wat Mae Pa. She looked at me puzzled, thought about it for a second and turned to the driver and said "Wat Mae Pa." To me, it sounded exactly like the way I said Wat Mae Pa. The driver repeated back "Wat Mae Pa?" and she said yes. And we took off. For the life of me, I couldn't hear any difference in the way I said it compared to the way she said it or the way the driver said it. But there was obviously a big difference because he understood her saying "Wat Mae Pa"and hadn't a clue what I meant when I said "Wat Mae Pa."
Posted by Jack at 12:00