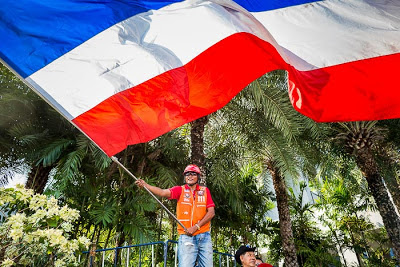 The Red Shirts ended their protest Wednesday with a motorcade from the Constitutional Court to the Parliament building. Some of the Thai media predicted up 100,000 people would attend the rally. The rally was being held in a pretty small space and 100,000 people would completely gridlock that part of town so I went out there to see what might happen.

There weren't very many people at the rally on the court steps. Only a few hundred - many of them remembered me from my visit last week and greeted me like I was a long lost friend. I was one of the few foreign journalists to make it out there, so I wasn't too surprised they remembered me. People listened to the protest leaders' speeches and then they went out to the road and climbed on their motorcycles or into pickup trucks for the drive to the Parliament building.

You would think that this is the tricky part of covering the protests here. Getting from where they start to where they finish. The protesters usually travel in caravans of well over 100 vehicles - cars, trucks, motorcycles, anything with a motor - large flags flying and people making speeches that are pumped through massive sets of speakers. There's usually music and party atmosphere. 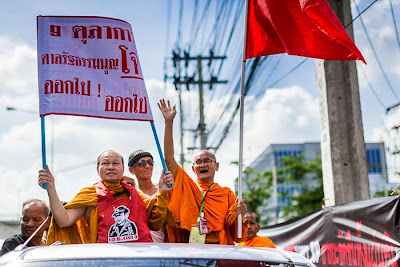 Buddhist monks in one of the caravan's lead trucks.

The first couple of caravans I photographed, when I was here in 2010, I walked alongside (they move pretty slowly) photographing as I went then peeled off and took a taxi ahead of the caravan and walked some more. It's great exercise but Bangkok's heat and the length of the caravans (some of them completely circle central Bangkok and take six or seven hours) make walking a pretty bad choice. And Bangkok's traffic makes taking a taxi the whole time an impractical choice.

Some of the photographers who live here have motorcycles. Others hire motorcycle taxis for the day. I've photographed way too many accidents here, all involving motorcycles, to make than an option. So now I do what the protesters do. I hitch a ride.

Wednesday morning was no different. I was photographing people getting into the trucks and buses and the caravan started up. I ran into the middle of the street photographing the cheering, looked up into a truck nearly full of protesters.

People looked back at me, six or seven hands shot out of the truck, grabbed me and pulled me into the moving pickup. I had my ride. 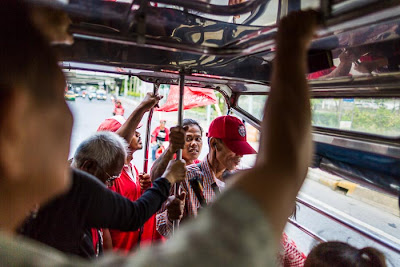 The view looking out of the pickup truck I hitched a ride in.

As we cruised through town, people in "my" truck waved at other truck loads of Red Shirts, and in one surreal moment, started singing "3 Blind Mice." In Thai. The music was kicked off by a sound truck festooned with large speakers. I don't know the context of the sing along (though I suspect something political) but it was weird.

The caravan did make worse Bangkok's already horrible traffic because police closed off roads to accommodate the protesters and 100 or more slow moving trucks driving in a caravan is going to mess up even the best planned street system. 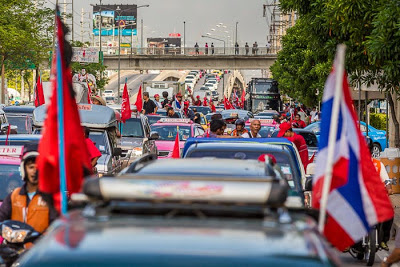 Part of the caravan.

The caravan was going to the Thai Parliament building, which is in the Dusit neighborhood. Police shut down a lot of the roads in Dusit, to keep protesters away from some government buildings, so the trucks ended up weaving through the area. I enjoyed the Dusit detours because we lived in Dusit for a while when I was child - although I couldn't find that house now, even if it is still standing (which I doubt). The other thing that was nice is that Dusit still has a lot of old, leafy trees so it's a tiny bit cooler than other parts of Bangkok. 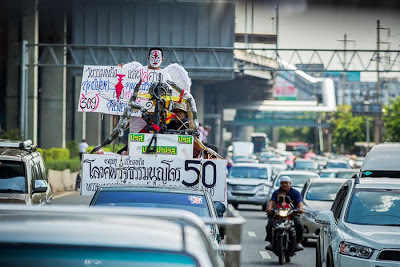 One of the protesters' trucks with a person perched on the roof. He was strapped into a chair. Not the safest way to take Bangkok streets.

When the caravan got into the Parliament neighborhood people bailed out of the trucks and hiked the last two blocks to the gates of the compound where a couple of hundred very relaxed riot police waited for them.

The protesters set up a stage, found some food vendors and it was the start of the new protest, same as the old. I photographed for another hour or so then walked out of the area (by now police had closed all of the roads into the area) found a motorcycle taxi and went to check out some stuff in another part of Bangkok.
Finally, most of the photos in my archive are available for editorial use or self fulfillment as prints. If you see something you'd like to use or just hang on the wall, click on the "Add to Cart" button and follow the onscreen prompts.