A Big Story For Shrimps

(And a good story for Arizona!) 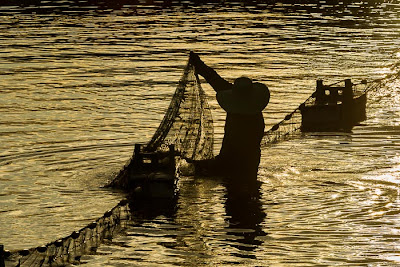 A workers sets out nets in a shrimp pond in Saphunburi province.

I set out Tuesday to photograph workers on a shrimp farm about two hours from Bangkok. Shrimp farming is an important part of Southeast Asia's economies. More than 1 million people in the region rely on shrimp aquaculture for their livelihood and shrimp farming contributed $13.3 billion dollars to regional economies in 2011. That's a lot of crustaceans dipped in cocktail sauce. Thailand is one of the world's leading shrimp exporters and shrimp aquaculture is an important part of the Thai economy.

I wanted to photograph the shrimp farms because Thai shrimp are dying en masse. The ponds are being ravaged by a disease called EMS - Early Mortality Syndrome - which kills shrimp before they reach market size. The shrimp lose their appetite then die en masse. 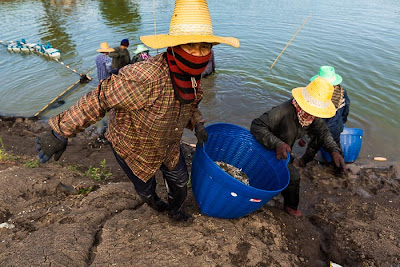 Workers on a shrimp farm haul shrimp out of a pond.

EMS is now occurring in Thailand. Shrimp farms in eastern Thailand experienced EMS related die offs in late 2012 and early 2013. Thai losses haven't been as pronounced as those in Vietnam and Malaysia because Thai farmers have responded by not restocking their ponds and in many cases letting them go dry. Firms that sell shrimp farm supplies have reported that their business is off by as much as 80% as farmers adapt a wait and see attitude.

The UN's FAO recently announced that it thinks it has found the cause of EMS, even if they don't have a cure for it yet. Researchers at the University of Arizona (Go Wildcats!) have determined that a strain of a bacterium commonly found in brackish coastal waters, Vibrio parahaemolyticus, is the cause of the disease. The next step is to find a cure. On a personal note, I like that researchers in Tucson, Arizona's coolest (and most under appreciated) city, found the source of the disease.

My quest to find a shrimp farm started as so many of my story ideas do, with a call to a Thai journalist I frequently work with on stories outside of Bangkok. We talked about the shrimp story and she made some calls and found an area west of Bangkok where there were both shrimp farms and dried shrimp ponds. We headed out of town early in the morning and easily found the shrimp farming area.

Our plan was to drive around until we found a farm we could photograph, but first we asked a local policeman if he knew where there might be some working shrimp farms. He said he did and he would take us to one. So he hopped into our car and took us straight to the farm. It's just another example of the remarkable helpfulness I encounter here almost every day.

The farm was a beehive of activity. Trucks with water tanks were parked on the edge of the pond and about 10 women were walking through the pond, dragging net to scoop up the shrimp. These were juvenile shrimp on their way to another farm where they would go into adulthood before ending up on a dinner plate in Bangkok or Los Angeles or Phoenix.

We talked to the farm owner who invited me to photograph as much as I wanted to and spent time chatting with me about his business.

I've covered a lot of agriculture related stories and I like hanging out with farmers. I've found that farmers, whether they're in Arizona or Minnesota, Mexico or Thailand, are usually kind of taciturn. Even if it's a "good news" story (which EMS is not) there's still a problem lurking in the shadows. It usually goes something like, "prices are good this year, but we haven't had enough rain," or "it's been great rain but there's a rot in the crops," or "the crop looks great but prices are too low."

I expected the same here.

I asked the shrimp farmer about EMS and he said it hasn't hit his farm and that he was concerned about it, but that he was practicing good pond management and expected to avoid the disease.

He didn't overpopulate his ponds, he didn't use antibiotics and his ponds were organic. (EMS was originally blamed on over crowded ponds, overuse of antibiotics and selective breeding so the shrimp would grow faster but were less resistant to disease.) So he was concerned but confident he would be okay.

I asked if the strong Baht was limiting export potential. (A strong Thai Baht means Thai exports cost more - some shrimp farmers and other exporters have complained about the Baht impacting exports.) He said the Baht wasn't a problem for him because he sold mostly immature shrimp to farmers restocking their ponds or to Thai domestic consumers.

I asked how business in general was and he said things were pretty good. Steady, but on the positive side of the line and that he didn't expect a downturn. Nothing like my other interviews with farmers.

I went back to photographing the workers hauling in the shrimp and transferring them to the waiting water tank trucks. 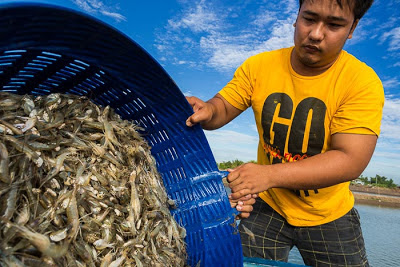 A worker dumps a basket of juvenile shrimp into a water truck. The shrimp will be used to stock another farmer's ponds.

The last stop we made was a road side stand that sells shrimp to commuters. These were not you're everyday frozen shrimp that American consumers are used to. Business was slow (it was now the middle of the day and there weren't many people driving back to Bangkok yet) so I watched the owner stock his shrimp tanks and couldn't help but notice the size of these crustaceans.

These were super humongous NFL lineman sized shrimp. In the US, "large" shrimp come 30 - 35 shrimp per pound. I asked about his shrimp and were told they cost 300 Baht (just over $10US) for a kilo (2.2 pounds) of shrimp. "How many shrimp would that be?" I asked. The shop owner picked up a still crawling shrimp and said "12." That's 12 shrimp in a kilo or 6 shrimp per pound.

That's not a large or jumbo shrimp. It's not even gigantic. That's an "extra colossal" shrimp. (Seriously, that's what they're called.) "Gigantic" shrimp, 12 to the pound or about 1/2 the size of these monsters, are about $20 per pound in the US ("large" shrimp are only about $11 a pound).

By now it was lunchtime and after photographing shrimp all day we decided that shrimp would be the appropriate lunch meal. So I ordered a kilo of still kickin' shrimp and the owner dropped them on the "barbie." Ten minutes later we were served a mountain of grilled shrimp with an indescribably good Thai dipping sauce of chilies, cilantro and fish sauce. Amazing Thailand. 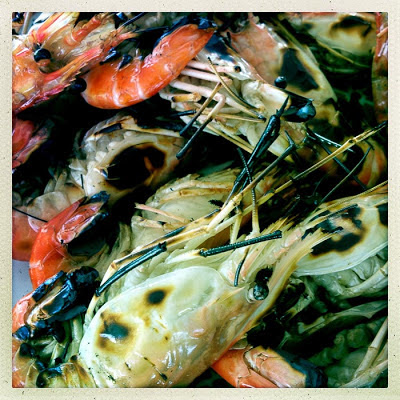 Fresh grilled shrimp. Ten minutes earlier these guys were crawling around enjoying life. This blog entry is not PETA approved.

There are more photos of shrimp farming in my archive or available from ZUMA Press.