The Cost of Cash 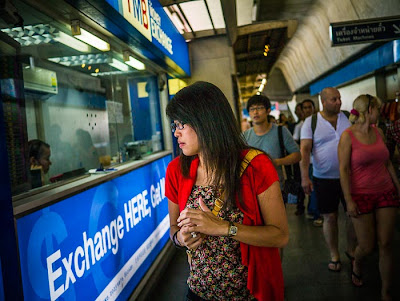 A woman walks past a currency exchange kiosk in a Bangkok BTS station.

One of the challenges I constantly face in Bangkok is thinking about the prices of everything in two currencies.

I pay for almost everything with Thai Baht. But most of my money comes from the US in the form of US Dollars, so I have to think about how many Thai Baht I can buy with each American Dollar. The euphemism is "exchange" but make no mistake about it, when you go to an exchange booth to get money, you're buying it, just as you would buy a loaf of bread, a new camera or a bowl of tom-yung goong (Thai hot and sour soup).

Lately it's been nothing but bad news in the Dollar (or Euro or Pound Sterling) vs Baht story. The Baht has been on a bit of a tear for the last two years, rising slowly but consistently against the Dollar and European currencies. I sort of understand its rise against the Euro - the European economies with the spectre of defaults in Cyprus, Greece, Portugal, Italy, Spain et al would be enough to convince me that I don't want to hold Euros.

The Thai economy is doing very well. Thailand is one of the leading exporters of fruit, chicken and pork products. It was the world's #1 rice exporting country until this year (it lost the #1 title because of internal politics in Thailand, not a drop in production). It's a leading exporter of cars (sometimes called the Detroit of Asia) and consumer electronics. The global supply chains were gridlocked in 2011 when flooding in Thailand made it all but impossible to buy a computer hard drive. So some of the Baht's increase is understandable.

The Baht's rise against the Dollar makes a little less sense to me than its rise against the Euro. Except that every time the Republicans talk about shutting down government to make a point, the Dollar falls a little further. The GOP's pandering to their base at home is hurting Americans around the world and the US' long term economic prospects.

Lately the Baht has outperformed the Malaysian Ringgit, Philippine Peso and even the Singapore Dollar (which is sort of the Swiss Franc of Asia).

The exchange hurts not only tourists. Ironically, it also has the potential to hurt the Thai economy. Just as everything in Thailand costs tourists from the US, UK and Europe more, Thai exports to the US, UK and Europe have become more expensive. A car that in Thailand costs 300,000B in 2003 would have cost $6,900 in the US. That same 300,000B car now costs $10,200USD. Before inflation.

The Baht's rise has been so dramatic that even economists in Thailand are sounding alarm bells. They are warning of layoffs in export industries if the Baht goes much higher and urging the Thai government to intervene, to do something, anything, to slow the Baht's appreciation against the Dollar.

It's hard to photograph something as dry as foreign exchange rates, but I've spent the last couple of days photographing people walking by exchange kiosks and buying Baht with their Dollars.