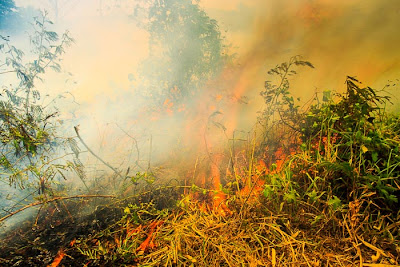 Flames burn dead grass and weeds out of a road side median in northern Thailand.

March and April are called the "burning season" in northern Thailand. The calendar might say summer (it's the hot and dry season here) but the air says burning. A pall of smoke hangs in the air, the hilltops shrouded in a gray haze. People were masks and filters to reduce the amount of smoke they breathe in. Some airports have to reduce flight operations.

For centuries farmers in northern Thailand (also in neighboring Laos and Burma) have used this time of year to prepare their fields for the coming planting season. That means clearing last year's dead growth. The quickest, cheapest way of doing that is striking a match and watch it all go up in smoke. And thus the burning season. 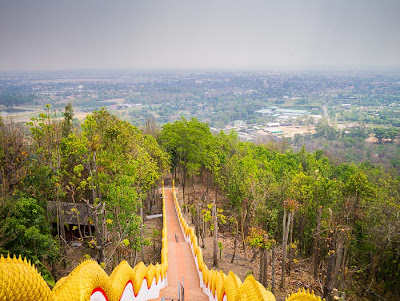 The "view" from atop Doi Kham near Chiang Mai. The city skyline is out there. Somewhere.

As Thailand becomes increasingly urban and climate change, public health and tourist revenue become more important burning is falling out of favor. Chiang Mai's beautiful mountain top temples, Doi Suthep and Doi Saket, are covered in smoke and their stunning views all but obliterated. This annoys big spending tourists but is really indicative of much larger problems. Hospitals are crowded with people struggling to breathe in the heavy smoke. National parks are threatened with destruction when illegal burns go out of control. And the fires contribute to Thailand's (and the planet's) race to deal with climate change. 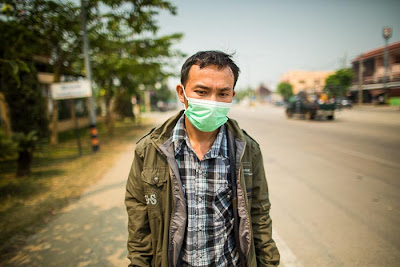 A man, who said he was unable to breathe in the smoke, walks to a small rural hospital.

The Thai government recognizes the problems the burning causes and is trying to put a stop to the centuries old practice. But it's hard to convince a farmer whose family has been burning the fields for as long as anyone can remember that their old ways are bad ways. The government has put a "bounty" on burners, offering rewards to anyone who turns in someone who sets an illegal fire. There is a public education program in place - you can hardly enter a rural village without running into billboards explaining the hazards and health problems of burning. The Thai Air Force is flying over some cities with tanker planes spraying water into the smoke, hoping to knock it to the ground.

The efforts have met with limited results. Anecdotally, burning seems to have been reduced but the air is still thick with smoke, people are still going to local hospitals and many fields still bare the telltale blackening of a recent fire.

There are more photos of burning around Chiang Mai in my archive.