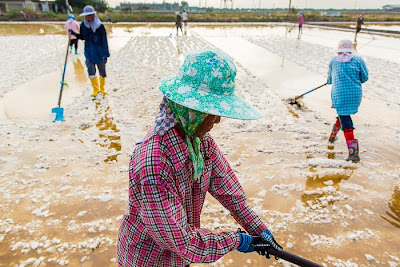 Migrant workers from Isaan rake salt in an evaporation pond near Samut Songkhram, southwest of Bangkok.

One of the things I love about being a photojournalist is that we get to see how "stuff" is made. I'm not a very mechanical person, but I find the process of how stuff is made to be interesting and usually pretty visual. It also serves as a reminders that the real "makers" in our society are also frequently society's least well rewarded members. Whether it's farm workers in the US, a carpenter in a housing development or a worker in a factory poultry farm, the work is almost always physically grueling, dangerous and low paying.

With miles of coastline, Thailand had what was once a thriving salt industry. Most of the salt collection fields have been consumed by development and are now industrial parks or housing estates. Now salt collection has been reduced to a handful of fields in Samut Songkhram, about 90 minutes from Bangkok.

Salt is something we take for granted. It's in almost everything we eat. When was the last time a consumer in an industrialized, urban community gave any thought to where his or her salt came from? It's something we shake on our food or rub around the rim of our margarita glasses. But there's an incredibly complex chain that goes from salt in the ocean (in the case of sea salt) to our tables.


On its simplest level, salt is collected after sea water evaporates. But if it was really that simple, our vacations on the beach would be an exercise in salt collection. 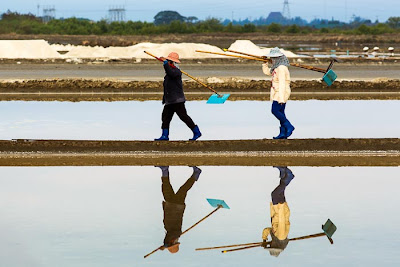 Sea salt production, like that found along coastal zones, generally involves flooding a plain with less than a foot of ocean water which proceeds to evaporate away. As the water evaporates, it leaves the salt behind which is then collected by workers.

Photographing salt production was one of the stories I'd planned to do when I started planning my move to Thailand.

Salt production a centuries old tradition and production methods haven't changed much over the centuries. Most importantly, salt "farming" could be a victim of climate change and global warming.

The production of salt is done during the dry season (which starts in November) and relies on a very predictable calendar.

Fields are prepped at the beginning of the dry season. Dikes are built (or renovated) around the ponds. The floors of the ponds are tamped down with rollers because the water needs to evaporate off, not run or drain off.

About three months before the actual harvest, the ponds flooded with sea water. Then the salt "farmers" sit back and let nature do its thing. The sun beats down on the ponds and little by little, every day, the water evaporates. 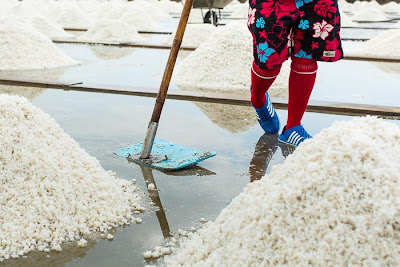 A worker stands among piles of salt during the harvest. This stuff tastes just like the table salt we shake on our food.

If the calendar is disrupted, say by rain in the prepping stage, then workers can't get all of the work done or it's delayed.

If it rains later in the cycle, during the evaporation stage, then it takes longer for the sea water to evaporate and the salt water is diluted.

If it rains during the collection stage, then daily work can be curtailed by the rain (depending on the strength of the storms) and the salt takes longer to dry after it's removed from the fields.

This year, it has rained almost the entire time. It rained right through December, on an almost daily basis, delaying prep work in the ponds. It didn't rain as much during the spring, but it rained often and heavily, which slowed the evaporation. It's still raining through the collection phase.

On Wednesday, while I was photographing, thunder was booming all around me. The morning which started out with a beautiful sunrise, quickly turned overcast and soon it was drizzling. Finally it was pouring and working in the fields was no longer an option. Workers filled their wheelbarrows and hauled the salt out of the fields as quickly as they could, knowing the rain would cut into their livelihood. 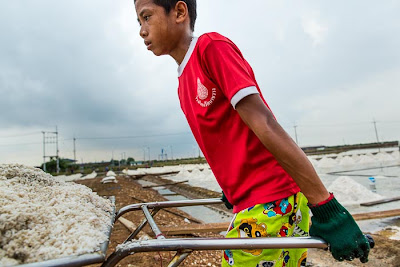 A boy pushes a wheelbarrow out of salt out of an evaporation pond.

It's not just that it gets warmer because of global warming, it's that the weather becomes more unpredictable. It rains when it's not supposed to and we experience longer and more severe droughts when it's supposed to rain.

Salt collectors in Thailand, like farmers in Australia or ranchers in America, need reliable weather to do their work. Climate change, by it's very nature, makes the weather unpredictable and threatens those who make their living off the land, like the salt collectors of Samut Songkhram.

I had counted on photographing the collection of salt, what I hadn't counted on was making three (or four - I lost count of the exact number) trips to Samut Songkhram to photograph salt production. The first two were scrubbed because the harvest was delayed by rain. The third because it was raining too hard for workers to get into the fields.

It was both ironic and fitting that my work in the salt fields was curtailed by unseasonable rains.

Finally, I've written several times about the basic decency of almost every Thai person I've met here. Photographing the salt workers was no different. I was wearing sandals on Wednesday and most of the workers were wearing heavy rubber boots. Several of them stopped me and pointed to my feet and told me to be careful - I don't speak Thai so I'm sort of guessing at what they were saying, but when one worker offered me his boots it became very clear. A couple of workers were wearing tennis shoes and I figured it was probably okay to work in sandals so I declined the offer. Later, I crouched down to photograph some of the salt piles and my ThinkTank camera bag ended up sitting on the ground (in the briny collection pond). A worker rushed over and held it while I worked and then used his drinking water to rinse off the bottom of my bag. Amazing Thailand.

Most of the photos in my archive are available for editorial use or self fulfillment as prints. If you see something you'd like to use or just hang on the wall, click on the "Add to Cart" button and follow the onscreen prompts.