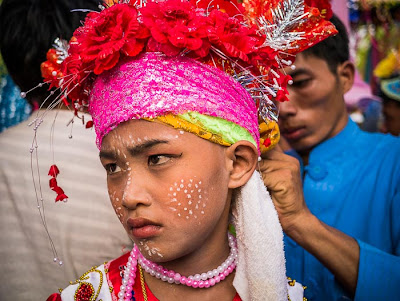 A boy entering the monastery participates in the Poi Sang Long Festival at Wat Pa Pao.

I'm in Chiang Mai working on a story about the environment. I had Friday afternoon free so I went "walkabout" to see the city. The very nice people at my hotel suggested a taxi because it was hot and too far to walk. They didn't know where I was going - but then neither did I - it's just anywhere is too far to walk. But as I've mentioned before, you don't really see a city unless you walk. So for a walk I went.

I walked up to the city walls and turned left with no plan other than to see what was what. Passing a small soi, I heard cymbals and drumming and carousing so I walked down the soi to see what the source of the noise was. There was a party going on in the grounds of Wat Pa Pao, one of the many Buddhist temples in central Chiang Mai.

I started photographing the festivities. Teenage and younger boys dressed up in fancy outfits and painted with lots of makeup were being carried through the grounds by men while drummers and cymbals players (cymbalists?) beat out a soundtrack. It was loud, colorful and fun. 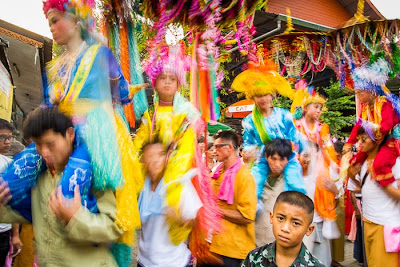 This was not something I had seen in Bangkok, so I wasn't sure what I had walked into. I suspected it had something to do with boys going to monastery because boys frequently go to monastery during the Thai summer school break (April is summer here) but I wasn't sure if this was a Burmese festival or Thai Lanna festival.

Burma occupied Chiang Mai for more than 200 years and there are a lot of Burmese refugees living here so that was quite possible. And this part of Thailand didn't get fully integrated into what is now Thailand until late in the 19th century and early in the 20th century. Before that it was the Lanna Kingdom, so that was also possible.

I asked a couple of older monks what was happening. They pointed at my cameras, pantomimed making pictures and encouraged me to photograph but didn't speak a word of English. They were very nice but no help.

I asked a couple of participants what was happening. They pointed at my cameras, pantomimed making pictures and encouraged me to photograph but didn't speak a word of English. They were very nice but no help.

I asked a Thai photojournalist what was happening. He pointed at my cameras, pantomimed making pictures and encouraged me to photograph but didn't speak a word of English. He was very nice but no help.

There was a theme here. Everyone was very nice but no help. I photographed for a couple of hours and figured I would use Google to sort it all out when I got back to my hotel. 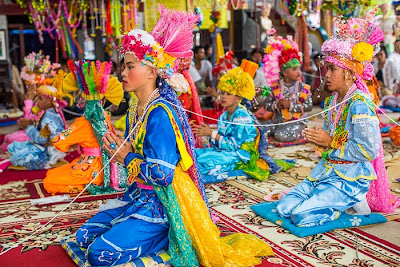 Boys in the prayer ceremony before they enter the monastery.

As I was leaving, on the off chance that somebody spoke English, I walked up to a group of seven or eight monks and asked what was going on. None of them spoke English but one asked me to wait (using sign language), said "English teacher" and walked away. A couple of minutes later he returned with the temple's English teacher (also a monk) who very patiently explained to me that this was the "Poi Sang Long Festival," a Lanna Thai tradition to mark the occasion of boys entering the monastery.

It was the boys' last chance to have "fun" (in the rambunctious sense of the word) before applying themselves to the study of Buddhism and meditation.

Monks and novices aren't allowed to have contact with women or girls, including their mothers and sisters. For many this would be their first time away from home. For the boys, underneath the fun there was also a little trepidation. For the mothers, who watched from the sides, pride mingled with sadness as their boys left home for the first time.

There are more photos from festival in my archive.