Night at the Opera 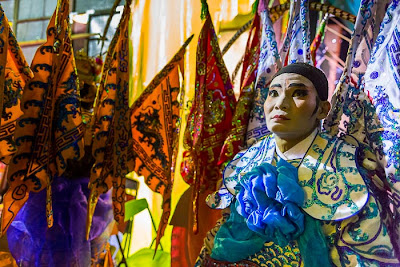 A performer waits to go on stage during a Chinese opera in the Talat Noi neighborhood of Bangkok's Chinatown. How I found the opera is almost more interesting than the opera.

One of the things I've had on my Thai "bucket list" is to photograph a Chinese opera. I photographed one in a shopping mall during Chinese New Year. It was a great experience, but it was in a mall - it was air conditioned with nice, consistent mall light. It was a great show, but it somehow felt inauthentic. I couldn't help but think a real Chinese opera should be outdoors, at night, at the end of a crowded Bangkok street or rural temple fair. So Chinese opera stayed on my bucket list.

For the last week or so, I've made a couple of runs into the Talat Noi neighborhood. It's a quarter of Bangkok's sprawling Chinatown. It's off the beaten path and not too many tourists go down there. Talat Noi is most famous for its architecture. Some of Bangkok's best preserved shophouse and traditional architecture is in this part of town. It's not as chaotic or frenzied as the markets around Yaowarat Road. Talat Noi used to be Bangkok's blacksmithing quarter. As bicycles replaced horse and buggy and motorcycles and cars replaced bikes, the blacksmiths of Talat Noi became mechanics and now mechanics' shops line the streets.

I got lost Friday in Talat Noi. I was looking for a specific street and couldn't find it. I knew I was close, but in the network of interconnected alleys, narrow streets and covered sidewalks I couldn't get to where I wanted to be. I was walking in circles and went through several intersections three times (and confusingly each time entered the intersection from a different street).

I finally gave up and headed out to the main road. Walking down a small soi, I walked into a stage set up in the middle of the street and discovered that there was a Chinese opera on this very stage all weekend. There was no one there who spoke English and I had forgotten my Thai dictionary so all I knew was that I would have to come back at the end of the day.

I went home and was reading the New York Times digital edition on my MacBook Pro. In what has to be a very strange coincidence, I saw they had a story about Chinese opera with a terrific slideshow by Yvan Cohen, another Bangkok based photographer. Clicking through the photos in the slideshow, I was kind of surprised to see that he had photographed the same opera I had stumbled on.

There are about 30 opera troupes in Bangkok and they move around the city performing at events and temples as needed. I still don't know what to make of my stumbling into the same opera company the New York Times was writing about on the same day they published their story. Very weird.

I went back to the opera Saturday night and had a wonderful time. The performers were wonderful subjects and very patient with me. The atmosphere was exactly what I had hoped for - outdoors, in terrible light and in crowded Chinatown neighborhood. It was terrific.

There are more photos of Chinese opera performances in my archive.
Finally, most of the photos in my archive are available for editorial use or self fulfillment as prints. If you see something you'd like to use or just hang on the wall, click on the "Add to Cart" button and follow the onscreen prompts.