Going For the Gold 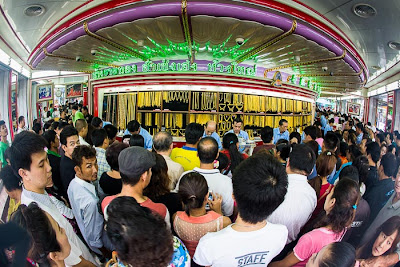 People crowd into a Bangkok gold shop looking for bargains after gold prices plummeted 13% over the weekend.

Thais, like the Chinese and Indians, are avid collectors of gold. Yaowarat Road, the heart of Bangkok's Chinatown, is also the center of Thailand's gold industry. Small gold shops, with curved counters and bright red decors, line both sides of the street. Gold prices are painted in the shop windows and updated on a live basis as prices change.

It's not unusual to see six or seven people crowded around the counters on any given day buying (or selling, depending on price movements) gold. Wednesday was not a normal day.

Commodities prices in general, and gold in particular, have been a downward slide for months now. Over the weekend, gold plunged another 13%.

Holiday timing in Thailand and the plunge in gold prices combined to create a frenzied buying scenario on Wednesday. Much of Bangkok was shut down Friday - Tuesday for the Songkran weekend. Gold and jewelry shops, that normally would have been open (and selling gold) through that time were among the closed businesses.

Thais at home were reading about the plunging price of gold but weren't able to buy any because their shops were closed.

I couldn't even get into the first gold shop I saw. There were so many people in the store I literally could not get in the door. I went to the shop next door and there was a smidgen more room so I squeezed in and inched my way to the side of the shop so I could photograph people buying gold. And they were buying. Wads of cash were crossing the counter as gold chains (most of the gold sold in Thailand is sold as jewelry) disappeared into customers' pockets and bags. Most of the business was cash and there was hundreds of thousands of Baht changing hands every minute in the shops. (Approximately 28Baht to the US Dollar, you can do the math.)

I walk around Chinatown a lot and stop into the gold shops a lot. With the bright colors, shiny interiors and curved counters they interest me photographically. Most of them are quite small. The proprietors don't seem to mind photographers (I've never been kicked out of one). But Wednesday's scene was not like something I had witnessed before.

People were pushing into the shops. Many shops stationed employees outside to give out numbers so people could wait in an orderly way, but it didn't seem to make any difference. People wanted gold and they weren't going to be deterred. I wouldn't call it panicked exactly. There was no shouting or screaming but people were determined. It was certainly frenzied. It was interesting and fun to photograph.

One of the lens I brought with me to Thailand is the Canon 15mm f2.8 fisheye. I like wide angles and I like the fisheye. Maybe a little too much. The problem is a fisheye becomes a cliche very quickly, using it can be a crutch to finding a more interesting photo. So I use it sparingly.

I grabbed the fisheye before I left my apartment Wednesday morning because I knew the gold shops were small and I suspected they would be crowded. Bringing the 15mm lens turned out to be a good decision. The shops were so crowded I had to hold the camera over my head, "Hail Mary" style, to make overalls. I tried to make photos with my 24mm f1.4 and they just didn't take in the scope of the crowd (it says something about the crowd when a 24mm is too tight) so I ended up using the 15mm for many of the photos. I think the Chinatown trip yesterday was only the second or third time since coming to Thailand that I took it out with me.

It was the sort of day that called for the extremes of lenses. The overalls were made with my fisheye, but for many of the photos at the counters I used my 200mm telephoto to isolate faces and hands and gold.

There are more photos of the gold buying frenzy in my archive or available from ZUMA Press.