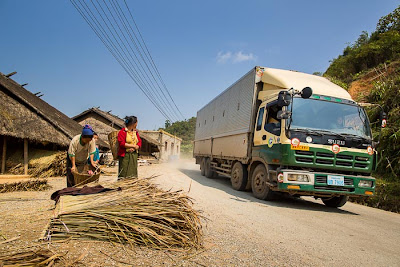 Women from a hill tribe community watch a Beer Lao truck roar past their village on Highway 13 in northern Laos.

Highway 13 is Laos' "mother road." Running from the Cambodian border in the south, it goes all the way to the Chinese border in the north and is the most important highway in Laos.

Around Vientiane it has all the trappings of a modern highway: it's paved and lined with gas stations, restaurants and motels.

North of Luang Prabang it's barely deserves to be a called a highway. Badly potholed, mountain curves and miles of unpaved dirt and gravel, there isn't a gas station or restaurant in sight.

I came to Laos to see Highway 13. As the Lao economy has developed, the highway's role has grown. Once a track that connected colonial towns to each other, it's now one of China's gateways to the world. Battled over by all sides during the American War, it's now the country's unifying road.

Laos, with the help of international development agencies and the Chinese government has been busy repairing and paving the road as quickly as they can.

Gas stations are being built where ever there's a flat piece of ground, new hotels and guesthouses are opening every week. Highway 13 is changing Laos. 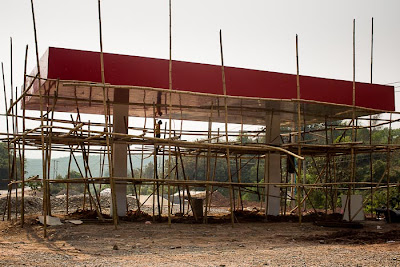 A petrol station takes shape on the side of Highway 13 in northern Laos.

Before the road was paved, most people used Laos' vast network of rivers to get to town. A trip to Luang Prabang from a village in the mountains might have required a three hour (round trip) boat journey. Now it's a forty minute (also round trip) bus ride. Roads used to be passable for only about half of the year, during the dry season. Now, in many places, the roads are all weather.

Hill tribe people are migrating out of their traditional communities to take economic advantage of the ribbon of pavement. Traditional thatched roofs are being replaced by tin and metal, traditional Lao wooden houses replaced by cement slabs and cinder blocks. 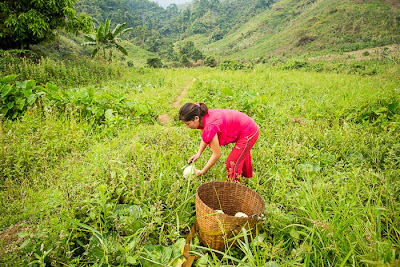 A woman harvests cabbage in her fields on Highway 13 north of Luang Prabang.

China is helping pave the road so it can move its exports from southern China through Laos and into Thailand and from there to Thailand's deepwater ports and the world. Likewise, imports now pass through Thailand into Laos and on to China. 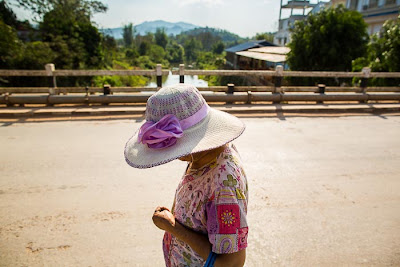 A woman crosses a bridge on Highway 13 in Oudomxay.

The expansion of Highway 13 isn't without a dark side though. As heavy trucks rumble down the road, pollution increases and a cloud of dust covers the once pristine mountains. 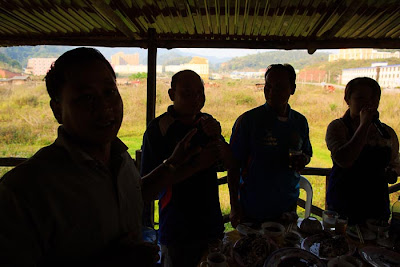 Men (and a woman) spend an afternoon belting out the latest Lao hits in a karaoke bar in Boten on Highway 13. The other women in the karaoke bar were just off camera.

Traveling Highway 13 is an eye opening experience. You're exposed to Laos in all of its glory, from the big city (by Lao standards) of Vientiane to the smallest hamlets and villages. It's a chance to see how Laos once was and will soon be.

There are more photos from my journey on Highway 13 in my archive.