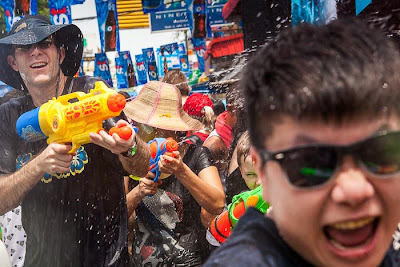 A water war on Khao San Road, the heart of Bangkok's "backpacker" district.

There's the European New Year on January 1. There are big parties, the traditional countdown and fireworks all over the country.

There's the Lunar, or Chinese New Year, with parades, lion dances and fireworks all over the country but especially in towns with large Chinese populations.

Then there's Songkran. The traditional Thai New Year is celebrated in April for four days. Thais go to temples to make merit. They bathe the Buddha in oils and scented waters. They present monks with extra alms offerings. It's quiet, beautiful and moving.

Then they go out on the street, grab buckets, firehoses and the biggest, baddest squirt guns ever made and do battle with each other. In the blink of an eye, the holiday goes from quiet religious observance to no holds barred mayhem. 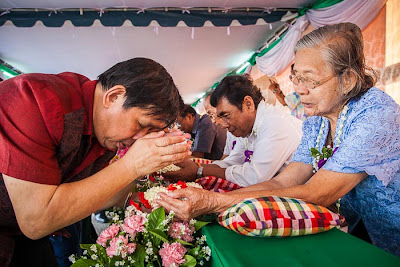 A man prays after washing an elderly woman's hands with scented water during a religious Songkran observance.


The tradition of water fights started many, many years ago. It was a part of the holiday when I lived here as a child more than 40 years ago. In the original holiday, still observed by many families and in temples throughout Thailand, people bathe the Buddha with scented oils and sprinkle water on each other to wash away past transgressions and to bring good luck in the coming year. 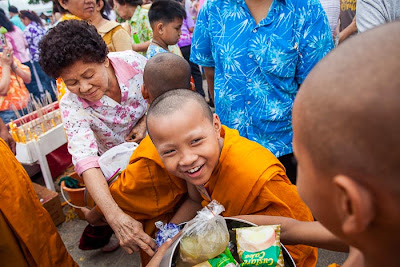 Novice monks at an alms ceremony at the Bangkok City Hall.

April is the hottest time of the year in Thailand. It's the middle of the dry season - in Bangkok daily highs soar into the upper 90s. There's usually a cloud of dust and pollution blanketing the city. People are ready for some relief. Songkran provides the outlet.

It's a small step to go from sprinkling water on someone to dousing them with a bucket. That is the modern Songkran. It's full of water fights and good fun. You can't go anywhere in Bangkok without getting soaked, it's best just to let it happen because if you try to fight it you're gonna lose. 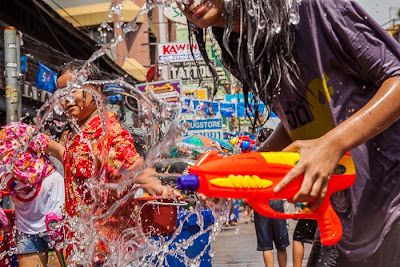 In the battle between bucket and squirt gun, the bucket wins. The squirt gun is more accurate, the bucket, at close range, has more impact.

I've covered Songkran a couple of times. I'm sort of a curmudgeon about the holiday. I enjoy the cultural aspects and love photographing the religious nature but find the water dousing kind of a pain. Cameras and water guns are generally a bad combination. Songkran in Thailand has killed more cameras (and cell phones) than theft, fire and disaster combined.

I usually travel heavy when I go out to photograph. Two Canon 5D series bodies, four or five lenses, a couple of flashes, my Lumix GX1 and a couple of lenses. I'm ready for anything. But for Songkran I pack super light. One body (my oldest 5D series body) and one lens (a beat up zoom I use only for Songkran) and a couple of spare compact flash cards. I carry them in a ThinkTank Hubba Hubba Hiney belt pack.

When I'm actually photographing, the camera and lens are nested in a Kata rain cover which looks ridiculous but keeps everything reasonably dry. It's about as safe as you can get without an actual (and very expensive) underwater housing.

Normally when I photograph, I use the lowest ISO possible and a shallow f-stop (f2 to f4) to isolate focus. For Songkran I set the ISO to 400 and use middle to small f-stop (f5.6 to f11) to maximize depth of field and keep as much in focus as possible.

Songkran can be a lot of fun. Thais have a way of celebrating that's inclusive and respectful at the same time. While I was photographing in Thai neighborhoods people always asked if they could spray me and when I said yes they made it a point to squirt my back or lower legs - away from the camera.

It's the foreigners (farang in Thai) that you have to look out for. They have no respect for the holiday or  Thai norms. For them, it's a chance to get drunk and act like buffoons.

I was walking down a Bangkok street and a drunk American saw me shouted something about the liberal media, chased me down and threw a bucket of water at me and the camera. I'm pretty sure his intention was to wreck my camera. (I looked completely out of place. Because I had been photographing a merit making ceremony I was dressed for the temple, not water wars on the street. It was a safe assumption on his part that I was working media.) The Kata rain cover did its job well - the camera was unharmed.

On the same street, a group of farang tourists were chasing Thai women and dousing them with Super Squirters and hoses. 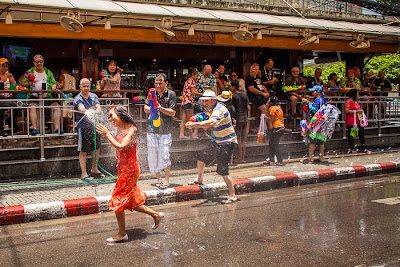 Foreign tourists chase a woman on a Bangkok street.

There are more photos of Songkran in my archive.