Things Did Not Go According to Plan 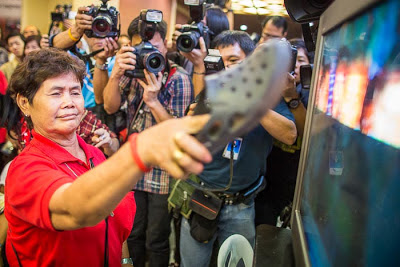 A Pheu Thai supporter attacks a TV set with her shoes after Thai news anchors announced that Sukhumbhand Paribatra, the incumbent governor of Bangkok (and member of the Democrat party) won reelection.

Bangkok was supposed to elect a new Governor Sunday. The race, like most political races in Thailand, came down to a contest between the Pheu Thai party and the Thai Democrats.

Pongsapat Pongchareon, ran on the populist Pheu Thai ticket (the unofficial party of the Red Shirts and the official party of Prime Minister Yingluck Shinawatra) and Sukhumbhand Paribatra, the sort of incumbent Governor, ran on the establishment Democrat ticket (I call Sukhumbhand the "sort of" incumbent because he resigned as Governor of Bangkok to run for re-election as Governor of Bangkok).

All of the pre-election polling showed Pongsapat with a small but consistent lead. Even the Democrats seemed to accept the inevitable. The last weeks of the campaign were marked by Democrat finger pointing and blame sharing. Sukhumbhand hinted that he might resign from politics after the election - never a sign that one expects to win.

As the polls closed Sunday afternoon, Thai TV stations and newspapers released the results of their exit polls which showed Pongsapat winning by a small but consistent margin. Spirits were high at Pheu Thai. Everybody was expecting a Red Shirt win.

But someone forgot to tell the voters. In what has to be one of the most remarkable electoral turnarounds I've seen in nearly 30 years of political coverage, Sukhumbhand led the election results early in the evening and his lead only grew as the night went on. 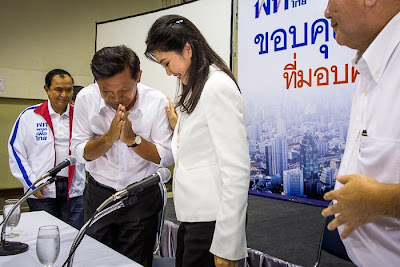 And as the night went on at Pheu Thai, happiness led to disbelief which led to sadness which led to anger. At the end of the night, when Thai TV stations cut to Sukhumbhand's victory speech, some of the Pheu Thai supporters anger overflowed. They started screaming at the TV's "aork pai" (phonetic translation for the Thai word for "get out") and then they attacked the TVs with their shoes and fists.

I live in a pretty small bubble in Bangkok.

I don't speak Thai, so when I talk to Thais about politics, I'm talking to Thais who speak English, which automatically means they're better educated and from a higher socioeconomic status than most Thais. They all predicted a Pheu Thai victory.

I only read the English language media in Bangkok, but even the pro-government, pro-Democrat media predicted a Pheu Thai victory. Opposition blogs (which generally support the Pheu Thai) and independent media had already published their analysis pieces on where it all went wrong for Sukhumbhand.

Yet everyone was wrong and apparently the exit polls were either horribly done (or people lied to the pollsters) because it wasn't even close.

Personally, I don't know enough about either man to know who will make a better Governor. Both men seem to be decent guys. I covered the Pongsapat campaign more than I covered Sukhumbhand because I like covering underdogs (even though he was favored to win, he was campaigning as an outsider, so I considered him more of an underdog) and I was thinking about the bigger story.

A Pongsapat win would have been news outside of Thailand.

It would have meant the Red Shirts, on the brink of political oblivion in Bangkok after the riots and army crackdown in 2010, (even though their stock rose nationally after the riots, in many parts of Bangkok the Red Shirts are scorned) controlled the city some Democrats accused of burning down. Finally, I covered the Pongsapat campaign because his victory would raise his profile in Thai politics nationally and internationally and there would be a need for photos of him.

One of my most consistent money makers in years of photography have been photos of politicians. They're not "sexy" and they're not always fun to make (although I do enjoy covering politics), but they are generally profitable. And photographers have to eat. A Sukhumbhand victory on the other hand would not be news much beyond the Bangkok city limits. I enjoyed photographing the Pongsapat campaign but I won't make any money from it now.

There are more photos from election day and the Pongsapat election watch in my archive or available from ZUMA Press.