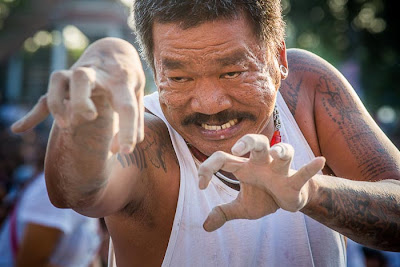 A man channels the spirit of the tiger during the "Wai Khru" ceremony at Wat Bang Phra in Nakhon Pathom.

I went to Wat Bang Phra in Nakhon Pathom province, about 40 miles from Bangkok, for the temple's annual tattoo festival. The festival is held every March but the exact date is selected only about a month before the festival. The temple's abbot selects the date based on what would be the most auspicious time to bless the tattoos. The Wat Bang Phra tattoo temple festival has been on my radar for years but the cosmos have never lined up to allow me to go.

I have been to the temple to photograph the tattooing process. One year, the festival was the day before I flew into one Bangkok. One year, it was the day I left. Now that I live here it's a lot easier to make sure I get to some of these temple fairs that I've always wanted to attend, including the tattoo festival.

The temple is famous for the Sak Yant tattoos monks and "wicha" (magical spirit tattooists) give people. In Thai Buddhist culture (and also in Laos and Cambodia), Sak Yant tattoos are considered sacred. They are thought to impart special powers or protections to people who have them. The tattoos are especially popular with soldiers and policemen and gangsters or anyone who lives by the gun. 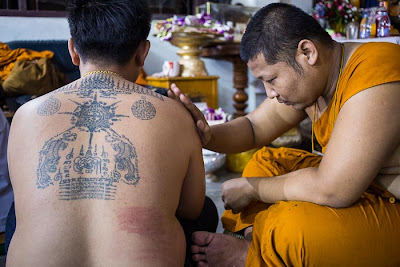 Sak Yant tattoos frequently feature an animal of some sort - a tiger or a monkey or a snake - animals important in Thai culture. The animals' powers are imparted into the person's character, so after a tattoo is blessed (the blessing "activates"- for lack of a better word - the tattoo) the person has the powers of a tiger or monkey or snake.

The "Wai Khru" ceremony is the temple's annual tattoo blessing and activation. Thousands of people who have gotten Sak Yant tattoos at the temple return to attend the blessing and ensure the continued good fortune provided by the tattoo.

I went to the temple Friday night with Gavin Gough, a photographer who lives in my apartment building in Bangkok, to photograph people getting tattoos, we stayed through Saturday to photograph the tattoo festival.

The tattooing Friday night before the festival was intriguing.

This is tattooing the way it used to be done. A man (in this case it's always a man) using a stainless steel needle, repeatedly sticking his client until the tattoo takes shape. (In some temples in northern Thailand tattooing is still done with bamboo needles.) The tattoo is done in comparative silence. The client talks to the monk or wicha for a few minutes about the tattoo he wants, the monk or wicha look over the man's other tattoos and tells him what he needs to complete the power and works accordingly.

When the tattoo is finished the man (or women, women also get tattoos but don't go into the trance state as often as the men do) has it blessed by a monk and leaves. Some of the tattooists, the more famous ones, charge money for their work, but generally the customer "pays" for the tattoo with a small donation. Sometimes the donation is as small as 100 Baht (about $3.30 US), a couple of lotus blossoms and a pack of cigarettes. There was sometimes more money, sometimes different flowers but always a pack of cigarettes.

The needles are not sanitized in a conventional, medically approved, way. They are rinsed off in rubbing alcohol before being used again on the next customer. Usually two people, one on either side, restrain the person getting the tattoo. Sometimes they're friends or colleagues of the person getting the tattoo. Other times they are just whoever is next in line for a tattoo.

The tattooists were very busy Friday in the hours before the ceremony. Tattoos were being done in six or seven rooms throughout the temple. In some rooms as many as four tattooists were working at once, in others only two. There was a constant line of people getting tattoos. Depending on the complexity, some tattoos were done in a matter of minutes, others took close to an hour. In between tattoos, monks and wichas chain smoked cigarettes and a pall of smoke filled most of the rooms at the temple. 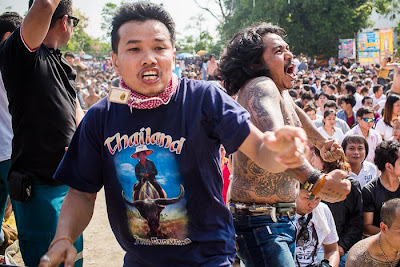 Men channeling the power of their tattoos rush the stage during the tattoo festival.

During the Wai Khru Saturday thousands of people packed the plaza in front of the temple. Monks recited a series of prayers and from time to time a men would go into a trance state and assume the character of their tattoos. (Women also get tattooed but it's almost always men who go into a trance state, I saw just one woman in a trance.)

The tigers and monkeys charging the stage run over and into anything in their path until they reach the stage. People in the crowd are constantly looking around and leaning left or right to avoid being run over by the men. The snakes crawl along the foot paths through the crowd and don't generally cause the mayhem the others do. A line of volunteer medics at the stage stop the men, comfort them and rub their ears to bring them out of the trance. The men return to their seats in the plaza. They frequently go back into a trance like state and charge the stage a second or third or fourth time as the ceremony goes on.

I thought the whole thing was fascinating. The men believed they were the animal in their tattoo. It was incredibly noisy with animal like shrieks and the crashing of men into the stage. There were no cries of pain and even though the men were in trances, they seemed to keep just enough situational awareness to avoid serious wrecks with others in the crowd, although truthfully the people in the crowd did a great job of dodging the men's charges.

At the end of the ceremony, monks take garden hoses and spray the crowd with holy water. I think the water serves two purposes. It's a definite sign that things have ended and it helps cool people down after they spend three hours sitting in the tropical sun. And Saturday's weather was brutal. I think it was the hottest day of the year so far. No breeze, no shade, just a blasting sun and 3000 tattoo aficionados in a space half the size of an American football field.

I've photographed water buffalo racing in Thailand from the track and bull riding at American rodeos from inside the arena. This was far more chaotic and more dangerous even if the men charging the stage are not as dangerous as a carabao or rodeo bull. One tourist took bad fall because a man channeling a tiger slammed into her while she was checking the images on her digital camera.

Photographing an event like this (or a sports event or conflict situation, anywhere you're close to the "action") calls for a lot of situational awareness on the part of the photographer. Not just knowing where a person charging you is coming from but also where the next person charging you, or the one after that, is coming from. It means paying attention to everything going on around you and not messing with controls on the camera or checking images on the back of your camera.

When I had to change lenses I stepped away from the action, to the periphery of the stage, changed lenses without turning my back on the crowd and then moving back into the action. One of the skills photographers learn early is to operate the camera on autopilot so they can stay aware of what's happening around them. (Those same skills come in handy when you're photographing on the streets of Bangkok.) In years past at Wat Bang Phra, photographers have suffered broken bones and been taken away from the temple in the back of an ambulance. It's an interesting thing to photograph but it's definitely more dangerous than your average press conference.

There are more photos from the Wat Bang Phra tattoo festival in my archive.
Finally, most of the photos in my archive are available for editorial use or self fulfillment as prints. If you see something you'd like to use or just hang on the wall, click on the "Add to Cart" button and follow the onscreen prompts.