Laos By The Numbers 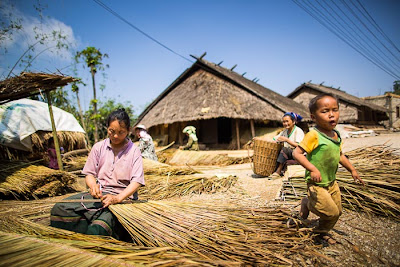 Hmong women weave thatch roofs for their homes in a Hmong community on Highway 13 in northern Laos.

I've been in Laos for the last 10 days working on a self assigned story about life along Highway 13, the main north-south artery in Laos and a road that's changing the country. I fly back to Bangkok tomorrow, so this is a good time to reflect on the trip.

Normally I set up in one place and work out of it for the length of the story. This trip was different because I never spent two nights in the same place. We (I had a hired car and driver) left Vientiane and started driving. We stopped along the way whenever I saw something I wanted to photograph. In some ways, it was like looking for "wild art" back in the days that I worked for newspaper. We planned just far enough out to end each day in a reasonably sized town that would have lodging. It was, by any measure, a great trip.

Laos is a physically breathtaking country and the people here are every bit as generous and gracious as the Thais, their cultural, religious and ethnic cousins. Both are Theravada Buddhist countries. Thai, especially the Thai spoken in northeast Thailand, and Lao are essentially the same language. At various times in their history Thailand (then Siam) controlled parts of Laos and the Lao Kingdoms (there were three spread from north to south all descended from the same Lao royal family), for briefer periods, controlled parts of Siam. Traveling in rural Laos today, especially western Laos close to Thailand, is a lot like traveling in Thailand was when I was growing up.

Because Laos and Thailand are so similar, nowhere is the effect of the American War in Vietnam as evident as it is in Laos. (Laos, like Cambodia, was officially neutral but like Cambodia was caught up in the maelstrom of war.) In Thailand, US aid built stuff to help the war effort. Divided four and six lane highways. Airports (former military airbases and air fields), electrical distribution. All the infrastructure needed to support a modern nation state. In Laos, the US bombed the same infrastructure. Bombs rained down on the cities, on the countryside, on the highways and bridges on almost everything. While the US presence helped Thailand become the dominant economy on the Southeast Asia mainland, the same presence set the Lao economy back decades.

Highways in northern Laos are narrow and winding. The average American suburban driveway is wider than a Laotian highway. Ten percent grades end in six percent grades which transition to eight percent grades. Many stretches of the highway are unpaved or the pavement is crumbling from disrepair. Under normal circumstances it takes about seven hours to complete 390 kilometer (240 mile) run between Vientiane and Luang Prabang. Stopping every few miles for photos is not normal circumstances and we never made very good time.

Laos by the numbers:

Hours in car: 63 (six hours a day in travel - but each day was much longer than that because we stopped along the way for photos and I edited at night. My normal work day on this trip was about 7AM to 11PM.)

This trip was exhausting. We were on the road every morning by 8AM and worked until dark. At the end of the day, in the hotel or guest house, I started editing. I didn't do a hard edit each night, there wasn't time for that. I ingested the photos into my Lightroom catalog and quickly went through them to see what needed to be redone and keep track of where I was on the project. Along the way I photographed some smaller stories, like the salt works on the Lao border and the morning Tak Bat in Luang Prabang.

I will be writing more blog posts about some of the specifics of my time in Laos when I get back to Bangkok.
Finally, most of the photos in my archive are available for editorial use or self fulfillment as prints. If you see something you'd like to use or just hang on the wall, click on the "Add to Cart" button and follow the onscreen prompts.