Even by Bangkok Standards.... 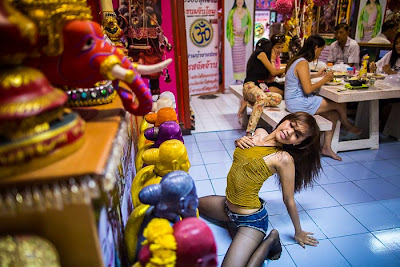 A "coyote" dancer performs for the deity of Chuchok at a suburban Bangkok shrine to the old Brahmin.

Any time something starts with "Even by Bangkok Standards..." you know you're coming dangerously close to sliding down the rabbit hole of different. The Chuchok shrine in suburban Bangkok is different. Even by Bangkok standards.

According to Buddhist legend, Chuchok was an old, rather "repulsive" Brahmin who lived in India in the time before the Buddha was the Buddha (somewhere around 535BCE - more than 2,500 years ago). He was married to a much younger woman who was given to Chuchok by her family because he helped the family. Chuchok, the old Brahmin, liked being married to a young girl.

The American movie "Coyote Ugly," by most accounts a completely forgettable rom-com made quite an impression in Thailand. It spawned a style of dancing called "coyote dancing." Attractive young women dance in sexually suggestive ways for men. Coyote dancing is popular at country fairs in rural Thailand and in bars pretty much everywhere in Thailand. As wildly popular as it is in bars, it is not so popular in temples or shrines and it's not without controversy. The Ministry of Culture has determined "coyote dancing" is offensive and banned it near temples.

Chuchok, the old man, liked young women. Thais enjoyed the movie "Coyote Ugly" and coyote dancing is big in Thailand. The two disparate items were meant to be joined.

Word spread, one thing led to another and now coyote dancers are regular visitors to the Chuchok Shrine in suburban Bangkok.

Although a few farangs have been there. The people who come to pray are Thais. This is a real Thai shrine, not something that was developed in the tourist industry.

The shrine operator, a woman (on the side she has a breast enhancement business*) does not charge people for admission to or for use of the shrine. She serves a free lunch of very tasty noodles and curry to shrine visitors. (She does accept donations, but donating is completely voluntary.)

I talked to one woman who hired coyote dancers after she prayed to Chuchok and asked for help in the lottery and help bringing harmony back into her marriage. Chuchok granted her wishes so she hired a pair of coyote dancers to perform for him. Her husband did not come with her to the shrine when she hired the attractive young women to dance in a sexually provocative way for the statues. Some of her girlfriends did though. It's hard to explain the experience.

It would be easy to laugh it off as another piece of exotica in Thailand. There was something surreal about it. There was nothing titillating about it. The women prayed when the coyote dancers arrived. The dancers prayed after their performance. This was a real religious experience for them.

The women quietly ate their lunches of noodles and curry while the coyote dancers pranced around the statues to the song "I Can't Dance" by LMFAO, which blared out of a CD player. The refrain? "I wanna dance. I can't do it. I can't dance, I'm too Jewish.*" Followed by an electronica mash up of Hava Nagila. I asked Nam, one of the dancers (Nam is her stage name) what it was like to dance in a shrine. She said it was "different" and that she was "nervous" when she started. She said she usually danced at fairs and in a pub.

There are more photos of the Chuchok Shrine in my archive or available from ZUMA Press.