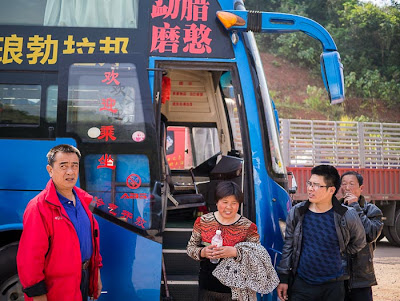 Chinese tourists stretch their legs after crossing the border in Laos.

Northern Laos is a pretty remote place. A two day drive from Vientiane and a full day's drive from Luang Prabang, Highway 13, Laos' north-south artery ends at a gravel parking lot in Boten. North is China. And it's China that's reshaping the face of this part of Laos.

China's presence in Laos becomes more evident the further north you drive. From Vientiane to Luang Prabang the highway is filled with heavy trucks hauling stuff through Laos between China and Thailand and mini vans and buses hauling tourists and backpackers from the capital to lovely town of Luang Prabang. But from Luang Prabang to the border the minivans and buses are replaced by super buses, ones that have fully reclining beds rather than seats, hauling Chinese tourists and migrant workers into Laos.

The Chinese presence becomes really evident in Oudomaxy, about two hours south of the border. Signs are in Chinese. Chinese license plates are as common as Lao license plates.

Then there's the department store. 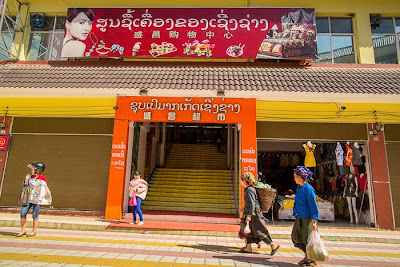 Chinese businessmen are taking over Oudomaxy. In addition to the department store, there's also a large Chinese market, Chinese hotels and Chinese construction projects in town.

The market and department store stand virtually empty, eschewed by the Lao because things are too expensive. When I went to the department store there were only two shoppers there, and they were together. The staff was so bored they followed me through the store sweeping up behind me. 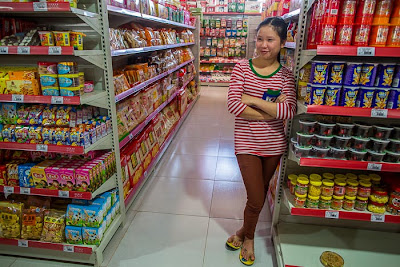 An employee in the Chinese department store waits for a customer. Any customer.

There's a children's play area. Empty. There's a snack bar. Not just empty, but not even open. The department store has plastic swimming pools, clothes, appliances, a very complete grocery, jewelry, music and DVDs (all the hits from China). And no shoppers. It's a surreal experience.

The Chinese market, on the plaza in front of the department store isn't much better. Chinese shop keepers chat with each other, play video games on tablets and stare into space while they wait for shoppers who never come. Many of the market stalls appear to be empty or abandoned.

Head up Highway 13 to Boten and the Chinese border and things get even more surreal. The Boten Special Economic Zone (SEZ) is a Lao effort to attract Chinese development.

It worked, perhaps too well. Chinese developers built huge hotel and casino complexes. They opened a large market with hundreds of vendors. Smaller casinos popped up in the market and Chinese tourists flooded into the area, not unlike American tourists visiting Tijuana or Ciudad Juarez in the 1950's.

Then things got weird (or weirder). The casinos were apparently owned by organized crime. Reports started circulating that people went in but never came out. Customers were lured to the casino by low hotel rates and easy odds but when their gambling debts exceeded their ability to pay they were allegedly tortured until relatives paid a sort of ransom. If customers somehow won, they simply "disappeared." 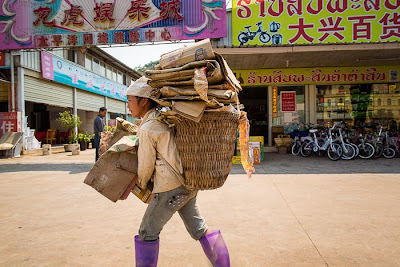 A Lao hill tribe girl picks up cardboard for recycling in the Chinese market in the Boten SEZ.

Chinese buses, that used to bring gamblers to Boten, now speed past the hotel taking the tour groups to the much tamer (and more enchanting) city of Luang Prabang. Truck drivers that used to stop at the casinos to wager a few yuan now keep going, instead stopping at the "karaoke" parlors that have opened to cater to the drivers' musical inclinations and other needs.

There are more photos of the Chinese influence in Laos in my archive or available from ZUMA Press.
Finally, most of the photos in my archive are available for editorial use or self fulfillment as prints. If you see something you'd like to use or just hang on the wall, click on the "Add to Cart" button and follow the onscreen prompts.