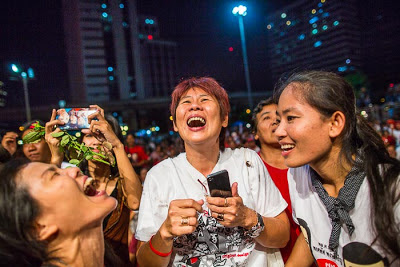 Women cheer for Nattawut Saikua at an election rally for Pongsapat Pongchareon, the Pheu Thai candidate for Governor of Bangkok.

I was one of thousands of people in Lumpini Park in Bangkok last night at a campaign rally for Pongsapat Pongchareon, the Pheu Thai candidate for Governor of Bangkok. Thai political rallies are not that different from political rallies in the US. There's a long line of speakers, the opening act as it were, that warms up the crowd - they tell the candidate's life story, outline the ills of the other side.

Thai rallies differ in a couple of ways though. There's food at Thai rallies - lots of it. And I don't mean hot dogs and burgers but real food served by the food carts that have made Bangkok famous for street food. There's also lots and lots of shopping. At Pheu Thai rallies you can buy all sorts of Red Shirt videos and music CDs, Red Shirt clothing, photos of Thaksin, photos of Prime Minister Yingluck Shinawatra. You can get a massage (something I've never seen at a US political rally) or buy inflatable toys for your kids.

One thing that is markedly different about Thai rallies is that the "warm up acts" talk a lot longer here than they do at rallies in the US. In the US, the "warm up" speakers take the podium for a few minutes, mostly to tout the achievements of the next speaker, who in turn touts the achievements of whoever is next and so on until the "headliner" takes the stage.

Some of the speakers last night spoke for 30 minutes or more. They didn't use teleprompters or notes. They strode to the microphone and started speaking and kept right on going. I don't understand Thai, but I've covered a lot of politics and I was really impressed with the speaking abilities of the Thai politicians. When was the last time a politician in the US spoke for 30 minutes without a teleprompter or notes? In 90+ degree heat?

Pongsapat was the "headliner" but the man who got the warmest reception was Nattawut Saikua, a Red Shirt firebrand and Pheu Thai member of the Thai parliament. 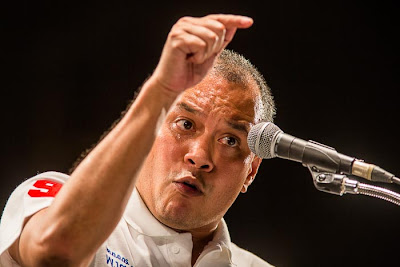 Nattawut was an amazing speaker. I don't speak Thai and I have no idea specifically what he said, but he had the crowd eating out of his hand. Judging by the tone and force of his delivery he was bringing forth a "fire and brimstone" type stump speech. I've covered enough Thai politics to recognize names (both people and place). Nattawut would talk about Abhisit (Prime Minister of Thailand during the Red Shirt protests when almost 100 people were killed by the army in 2010) and people booed, he would talk about Suthep, Abhisit's Deputy PM in 2010 and the man many directly blame for the violence, and the crowd's anger was palatable.

Then in a remarkable turn, Nattawut delivered a performance, there's no other word for it. He would say something (not speaking Thai, I don't know what he said) and then change his voice and respond to what he had just said. This went on for some time, and based on the number of voices he took on he must have portrayed four or five different characters. Judging from the hoots and hollers of the crowd, he was channelling Pheu Thai's Democrat opponents. Nattawut spoke for about 30 minutes and the crowd ate it up.

Pongsapat immediately followed Nattawut. Pongsapat is widely regarded as a good speaker (during his time with the Royal Thai police he served as the force's main spokesperson) and he delivered what I thought was a serviceable, but not very fiery, speech. Again, I didn't understand a word of it. I'm going completely on crowd reaction.

I felt a little bad for him. It would be like James Taylor going on stage after Bruce Springsteen wears out the crowd. Both are great musicians, but JT is a much more laid back performer than the Boss.

There are more photos from the rally, and Thai politics in general, in my archive or available from ZUMA Press.
Finally, most of the photos in my archive are available for editorial use or self fulfillment as prints. If you see something you'd like to use or just hang on the wall, click on the "Add to Cart" button and follow the onscreen prompts.