Welcoming in the Year of the Snake 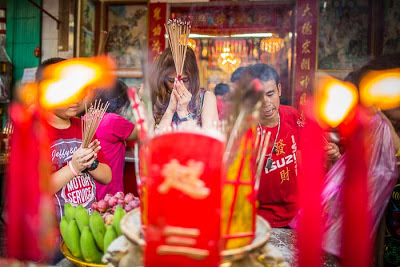 People pray for a prosperous year at a small Chinese shrine in Bangkok's Chinatown during Lunar New Year celebrations this week.

Thailand celebrates the New Year three times in four months. Thais mark Gregorian calendar New Year on January with big parties all over the country. Thailand, which has a large Chinese population, celebrates the Lunar New Year with gusto, especially in the Thai-Chinese communities. And Thais celebrate their traditional New Year, Songkran, on April 13. That's got to be some kind of a record.

This weekend was Chinese New Year (also called Lunar New Year or Tet). I went down to Bangkok's Chinatown, a maze of narrow alleys and congested streets that teems with people 24 hours a day.

Chinatown on Lunar New Year takes the congestion and hyperactivity and multiplies it by a factor of ten.

There are more photos from the Lunar New Year in my archive.