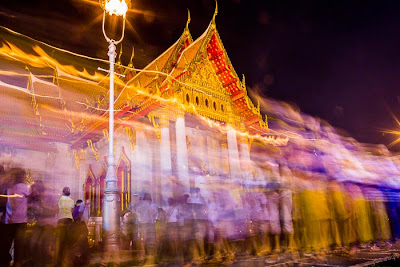 A candle light procession around the Marble Temple on Makha Bucha night.

Monday was Makha Bucha Day, an important Buddhist holiday celebrated throughout Southeast Asia. In Bangkok, people come to the temples throughout the day to pray and make merit.

As afternoon passes into evening, monks lead a chanting service. Just after dark, monks file out of their temples and lead a candle light procession that circles the temple three times.

I photographed Makha Bucha Day for the first time at a small temple in Kanchanaburi several years ago. I enjoyed the experience and was looking forward to Makha Bucha Day in Bangkok. I went down to Wat Benchamabophit, in Bangkok's Dusit district, early in the afternoon. I brought a lot of gear - two bodies, my 24mm, 40mm, 50mm, 100mm and 200mm lenses, a couple of flashes and a bunch of memory cards. At the last minute, I threw a tiny table top tripod into my camera bag. It turned out to be the smartest decision I made all week. 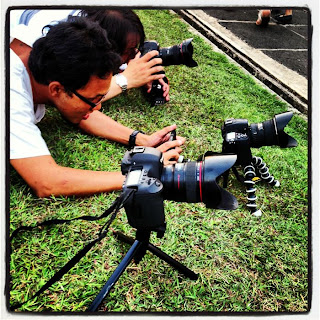 An Instagram view of my camera on its teeny tiny tripod. I was not the only photographer who thought about photographing Makha Bucha at Wat Benchamabophit, there was a line of cameras on tripods spread out in front of the temple. At least I was the only "farang."

I wanted to photograph the streaks of light as the candle light procession came around the temple. It seems to be an unwritten rule that there's never light when you need it (high school basketball games come to mind) but conversely it's never dark when you need it. The front of Wat Bencha was lit up with huge floodlights. You could have read the fine print on a plane ticket with the light they had set up.

For my time exposures I set the camera to f22 in Av (Aperture preferred mode), ISO 200 and let the camera select the shutter speed. I started at f8, but I was getting exposures in the 1/2 to 1 second range and that wasn't long enough to blur the light the way I wanted to. So I went to f22 and ended up with 5 - 10 second exposures (which is really only a 2 - 3 stop difference). I also made some photos at ISO 50 and 100 to get even longer exposures. The picture at the beginning of this post was made at ISO200, f22 and 5 second exposure. All of the time exposures were made with my 24mm lens.

Not to long ago I would have made these pictures in the manual mode, but as I've gotten older and the technology has gotten better I trust the camera's computer more and more. I still set the ISO and f-stop but rely on the camera to select the shutter speed. I checked the photos on the screen on the back of the camera periodically but not for every exposure. When I'm checking this kind of stuff (time exposures) I always use the histogram to determine the accuracy of the exposure. If the histogram looks good, and is properly distributed between highlights and shadows, I know the exposure will be right.

The other decision I make on something like this is to manually set the color balance. I like to set my camera to "tungsten" color balance when I work at night. Tungsten is the color balance of incandescent lights, which is more orange than daylight is. Setting the camera to tungsten compensates for this and, in my opinion, gives me a more natural looking photo. It also really makes night time skies pop.

The photo at the beginning of this post was made with the camera set to "tungsten," which translates to about 3200° Kelvin. I thought the photo was still too warm (orange) when I edited it in Lightroom and I ended up bringing the color temperature down to 2800° K.

The temple was packed. There were people everywhere, including on the plaza in front of the temple. Even with a 24mm lens, I would have had to stand at the back of the plaza to get the procession and temple into the frame and there would have been hundreds of people between me and the procession.

I was able to eliminate the crowd of onlookers by setting the table top tripod on the ground in front of the crowd, right on the edge of the path, photographing up to the temple's roof. This cleaned up the scene considerably. The Thai photographers who were next to me on the ground had full size tripods with them but decided to go the table top route to clean up their compositions. I was lucky it worked out that way.

Those photos and more are in my archive or available from ZUMA Press.