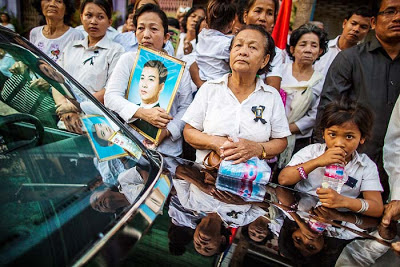 Mourners stand behind a Cambodian government limousine to watch the cremation of King-Father Norodom Sihanouk.

Sihanouk's cremation last night was an amazing experience. Thousands of Cambodians packed the streets around the Royal Palace and the National Museum (they're next door to each other) and tried catch a glimpse of the proceedings. Their view was blocked by the six foot high wall that surrounds the museum and the international media that was pressed up against that wall, but they waited in patient silence until a 101 gun artillery salute was fired. As the cannons roared, the people wailed in anguish. The once silent streets were filled with the sounds of people no longer able to contain their grief. 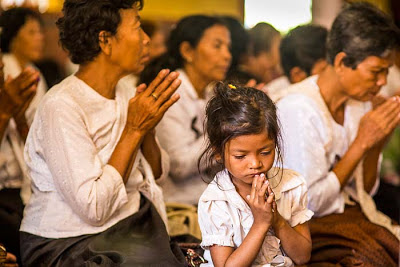 The memorial service in Wat Ounalom.

My day started early. The cremation service started at 4PM (a day long chanting service transitioned seamlessly into the cremation service) but expecting large crowds and chaotic checkpoints I left my hotel at 9:30AM. By my standards, I packed very light for the cremation. Two Canon 5D series bodies, my 24mm f1.4 lens, 50mm f1.2 lens, 100mm f2 lens and 200mm f2.8 lens. I also packed a 1.4X teleconverter, a Canon 430EX II flash and a lot of compact flash cards. I carried everything in a ThinkTank Hubba Hubba Hiney belt bag.

The checkpoint into the cremation area was packed and Cambodian security officials weren't allowing people to go past their checkpoint. So I did what many of the Cambodians did - walked down the fence line and climbed over the barricades. Once inside, I photographed a few people praying at shrines or waiting for the service to start. Many of the businesses inside the perimeter were closed. Only restaurants catering to foreign tourists were officially allowed to stay open. The police walked up and down the streets ordering the few businesses that tried to stay open to close.

I tried not to photograph too much early in the day. The main event was the King-Father's cremation and I had already photographed a lot of people praying and mourning.

Early in the afternoon, I walked down to Wat Ounalom, one of the most important Buddhist temples in Cambodia, and photographed people at a service honoring the King. The service was in the main prayer hall of the temple and it was completely packed. People had spilled out of the prayer hall and were sitting on the ground around the temple listening to monks chant and talk about their revered King-Father.

Then I went back to the cremation venue and photographed people sitting in the alleys and around the museum. As the afternoon went on, foreign dignitaries, Buddhist monks and Cambodian government officials arrived. Their arrivals were low key affairs. There was no red carpet experience. People got out of the cars and walked silently into the crematorium.

At about 6PM, a Cambodian artillery salute signaled the King-Father's cremation. Immediately after the cannon fire the streets of Phnom Penh filled with the sounds of thousands of mourners wailing. It was as if a dam of grief collapsed and Cambodians, who have been silent in their sorrow, wailed at the loss of their revered King.

I photographed people on the street crying and wailing and made my way back to my hotel where I edited and filed my photos. I filled three 8 gigabyte cards and the better part of two 16 gigabyte cards. The fast primes were key to making the photos of mourners after the cremation. The streets were dark and flash would have destroyed the ambiance.

Most of my exposures were made at ISO 3200-6400 at f1.4 to f2. It would have been much harder to use f2.8 zooms under those conditions. Photographing under those circumstances just a few years ago with the digital cameras available then would have been nearly impossible. The 1D Mark IV and 1DX, Canon 5D Mark III, and the older 5D Mark II, and Nikon's D4 and D800 are virtually noise free up to ISO 3200 and still eminently usable up to ISO 12,800. Photographing at those ISO's would have been unheard of five years ago. 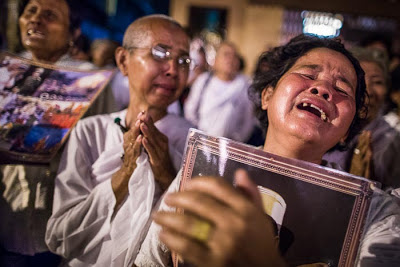 The loss of the King-Father closes a chapter on Southeast Asian history. Sihanouk guided his country to freedom from French colonizers. He ruled Cambodia from 1953 until a US sponsored coup deposed him in 1970. That coup led to Cambodia's descent into a generation of darkness. It led to the rise of the Khmer Rouge and deaths of millions of Cambodians who perished in the KR genocide.

(Sihanouk's armed forces had been battling the Khmer Rouge for years before 1970. Because he was trying to keep Cambodia neutral in the war raging in Vietnam, the North Vietnamese were not giving much aid to the KR and it was a stalemate. After the coup, when the US invaded Cambodia and the subsequent US aerial bombing - which by itself killed hundred of thousands of Cambodian civilians - the North Vietnamese gave military aid to the KR and the Cambodian countryside was radicalized. All of which led to the Khmer Rouge takeover of Cambodia which led to the Killing Fields and genocide. It's a straight line from the Nixon White House to millions of dead Cambodians.)

On a personal note, the Cambodians were very gracious hosts. I only wish some of my colleagues had reciprocated. The behavior of some photographers was embarrassing. I watched one man, an American, who claimed to be a credentialed photographer, argue with Cambodian police about access to a media riser. The man was wearing shorts and a tee shirt and wasn't wearing a credential. When the officer asked to see his credential the man told him it was in his hotel room. When it was clear the Cambodian officer didn't speak English, the man shouted, "IT'S IN MY HOTEL ROOM." Hint: Shouting won't make you understood. It will make you look like an ass. When the police officer tried to escort the man out of the media area, the pseudo photographer shouted, "NOW YOU LISTEN HERE!" I walked off, ashamed at his behavior. The last I saw of him, he was being carried/dragged away by two tiny Cambodian police officers.

The dress code for events around the funeral was white shirt, black pants, black tie, black mourning arm band. The Cambodians provided the arm bands, we were to provide our shirt, pants and tie. The dress code was on the media application form and there were photos and posters of the dress code posted around the Ministry of Information. Every Cambodian photographer and reporter was properly attired. Many of the foreign journalists were, but there were a number of photographers who either didn't care or didn't respect Cambodian custom, they wore tee shirts or jeans or cargo pants in a variety of colors.

There are more photos from the King-Father's cremation in my archive or available from ZUMA Press.

Finally, most of the photos in my archive are available for editorial use or self fulfillment as prints. If you see something you'd like to use or just hang on the wall, click on the "Add to Cart" button and follow the onscreen prompts.
Posted by Jack at 19:27