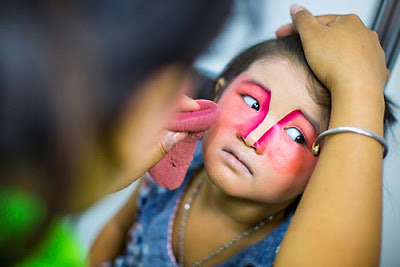 A child is made up to perform in a Chinese opera in a mall in Bangkok.

Chinese opera is an art form that goes back centuries. In a time before movie theaters, television or the internet, Chinese opera was entertainment for the masses in China. Roaming opera troupes criss-crossed the countryside bringing culture and laughs into the lives of Chinese peasants. As Chinese, especially Teochew Chinese, emigrated to new homes, they brought their culture, including opera, with them.

Thailand is home to a very large Teochew-Chinese emigrant population and Chinese opera is popular here. The operas are sung in the Teochew language - not many Thais speak or understand Teochew, but they respond to the spectacle of the opera. The over the top makeup and costumes, the actors' expressions, the universal nature of art.

Chinese operas in Thailand are usually performed during holidays and special events. This weekend is Chinese New Year, also called the Lunar New Year or (in Vietnam) Tet. The Lunar New Year is a huge holiday here. Most businesses put on some kind of a Chinese New Year promotion, offering drawings for trips to Hong Kong and Macau, numerous two for one offerings or Chinese cultural shows.

Seacon Square is a large mall in the suburbs of Bangkok. Most of Seacon Square's clients are Thais, it's well off the tourists' trail.

Malls in Thailand, just like malls in the US, have become public gathering spaces and Seacon Square is sponsoring Chinese operas through the New Year holiday period. I went out to Seacon Square yesterday to photograph the opera.

The opera started at 4PM, but I was most interested in photographing the performers getting into character before the show, so I got there at 2PM. I found the opera company and was invited to photograph as much as I wanted. I spent a couple of hours with the performers putting on makeup and getting into their costumes before their performance and then photographed their show.

It was my first Chinese opera. I enjoyed it but I didn't understand a word - like the Thais, I enjoyed the spectacle.

There are more photos from the Chinese opera in my archive or available from ZUMA Press.
Finally, most of the photos in my archive are available for editorial use or self fulfillment as prints. If you see something you'd like to use or just hang on the wall, click on the "Add to Cart" button and follow the onscreen prompts.
Posted by Jack at 19:51