A Funeral Fit For a King 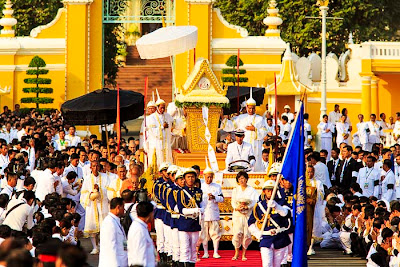 The coffin bearing King-Father Norodom Sihanouk leaves the Royal Palace in Phnom Penh to start its last journey around the Cambodian capital.

Phnom Penh pretty much shut down Friday morning. The normally bustling capital was quiet as Cambodians lined Sisowath Quay, Phnom Penh's riverfront boulevard, up to Wat Phnom and back to the Palace. The total route was probably less than 10 kilometers (it's a route I've walked several times, so it can't be that long) but it took the cortege more than four hours to make the circuit. (Quiet doesn't mean silent though. There is classical Cambodian music playing out of speakers all along the waterfront. I think it's lovely but it's nothing like anything I normally listen to.)

I left my hotel at 4:45AM, the procession was supposed to start at 8AM. Sunrise in Phnom Penh comes at about 6:45AM, so I had almost two hours of darkness to work before it even got light. I made some features of people lining up in the darkness and a couple of photos of the Royal Palace.

When the sun came up, I photographed Aspara dancers getting into character and mourners on the route. The procession started at 8AM sharp when the doors of the palace opened and the King's coffin was towed out. It inched out of the palace and it wasn't until 8:15 that I had a really good view of the coffin (which is when I made the photo at the top of this blog entry). I made a few photos of the coffin and royal party (members of the King-Father's family walked ahead of the coffin) moving up the red carpet. The party was walking more or less due east, directly into the sunrise and the light was beautiful. Phnom Penh has some of the most amazing sunrises of any city I've been in and this morning was no different.

The photographers were set up on a stage in a performance space on the river, west of the palace. As soon as I made the photos I needed, I left the stage and ran around to the side of a spirit house where I made some photos of monks chanting and the coffin being loaded onto the ornate hearse that would carry Sihanouk on his final journey.

The procession started and I walked alongside it making photos of the coffin with the city's buildings behind it and photos of mourners. I was on the west side of Sisowath Quay, with the sun behind me and the light was great. The procession went down the Quay to Wat Phnom and then headed into the city.

I made photos of mourners weeping and holding photos of the King-Father near Wat Phnom and then headed back to my hotel to file. I photographed about half of the procession but the photos were starting to repeat themselves. I filled four 8 gigabyte cards, about 1,100 photos, and I needed to start editing.

The next step in the funerary process will be the King-Father's cremation on Monday.

There are more photos of the procession and mourners in my archive.
Photographers can be a pretty tight bunch and I need to include a note of thanks to a couple of photographers who helped me out this week. John Vink, a Magnum photographer who lives in Phnom Penh directed me to the Ministry of Information and helped me get credentials for the funeral. David Longstreath, a former AP photographer who lives in Thailand, let me borrow his 300mm lens for the photo at the top of this page (and I loaned him my 1.4X teleconverter).

Finally, most of the photos in my archive are available for editorial use or self fulfillment as prints. If you see something you'd like to use or just hang on the wall, click on the "Add to Cart" button and follow the onscreen prompts.
Posted by Jack at 20:00