The Right Tools for the Job 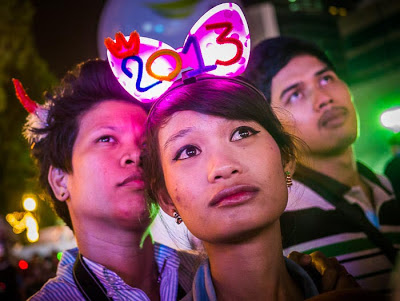 New Year's revelers wait to get the party started at Bangkok's New Year's Eve countdown in Ratchaprasong intersection. Picture made with my Panasonic Lumix GX1 and the Panasonic 20mm f1.7 lens.

I spent last night photographing Bangkok's big New Year Eve countdown party. A dirty little secret is that in 28 years as a photojournalist at daily newspapers, this is only the second time I've photographed an actual "clock strikes midnight" New Year's Eve party. The deadlines at the papers I worked for were always so early we only covered the first couple of hours of the community New Year's Eve parties. We'd drop in a picture from 7PM or so into the page and hope that nothing big happened after deadline.  I was always home by midnight. (My first clock strikes midnight New Year's Eve was Y2K. Anyone remember that? I covered a church service where they prayed the world wouldn't end and it didn't.)

Planning to cover the Ratchaprasong soiree I took a two things into account: 1) I would be out on the street, on my feet from 5PM when I left my apartment until 1AM or so when I got back to my apartment and 2) it was going to be very, very crowded.

All signs pointed to packing light. I knew it would be dark, and there's no better camera for available darkness work than my 5D Mark III and the 24mm f1.4 and 50mm 1.2 lenses. They're also huge and fiendishly heavy. The antithesis of packing light.

There's nothing lighter than my Panasonic GX1 and its tiny lenses. The full kit - the Panny body and the 14mm f2.5, 20mm f1.7 and Olympus 45mm f.18 lenses together take up only a little more space than the Canon 50mm f1.2 lens does by itself and they weigh next to nothing.

I use the GX1 a lot and I like it. I think it's very nearly the perfect street photography camera, fast, reasonably quiet and very unobtrusive. I was a little worried about the high ISO noise from the smaller sensor, but decided that if I could keep the ISO to 1600 and below, Lightroom's noise reduction would do the rest. 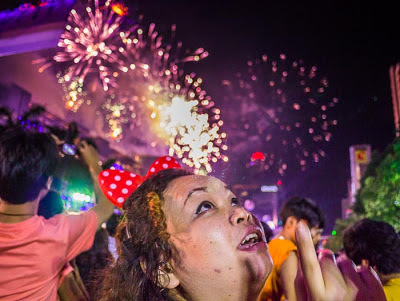 So I left the Canons at home and ventured forth with the Panny and its diminutive lenses. It worked reasonably well. Which, I realize, is not exactly high praise.

The things I like about it - small size, speed and unobtrusiveness - were great. I was able to make some photos with the Panasonic that I don't think I would have made with the 5D Mark III and its lenses.

But its faults and the limitations of the smaller Micro 4:3 sensor were glaring.

The one I feared, noise at 1600 ISO, was the easiest to control and not much of a problem (although the Canon 5D Mark III is still the champ at high ISO, I think the Panny at 1600 looks like the Canon 3200 or even higher). Lightroom's noise reduction did a nice job of reining in the chroma noise. Still, I made it a point to shoot at the lowest ISO possible. As a result, I had a lot of photos made at ISO 400 and 800 that were not usable because of blur, either camera shake by me or motion blur from the subject's movement.

The other problem, and one that is nearly impossible to control, is ghosting on the sensor. For some reason, this is a much bigger problem with the GX1 than it is with the Canons. I don't know if it's a lens issue or camera issue, but it's a serious problem.

Basically, pinpoint light sources in the frame get reflected back into the image and I ended up with a lot of photos I couldn't fix. It's a problem I've noticed before, but because I haul out the larger Canons when ever I get into really bad light I never realized how serious a problem it would be with the Lumix.

Here are some examples of what I'm talking about (I've circled the ghosting): 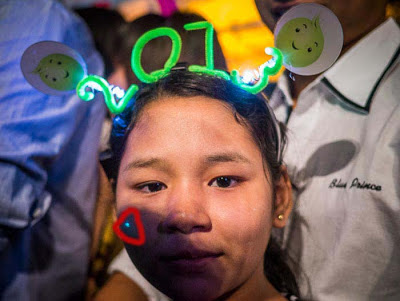 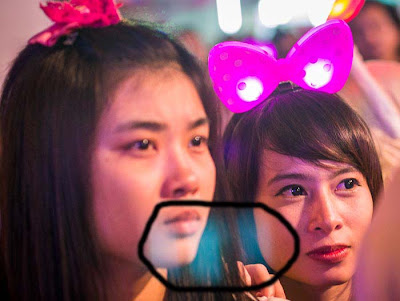 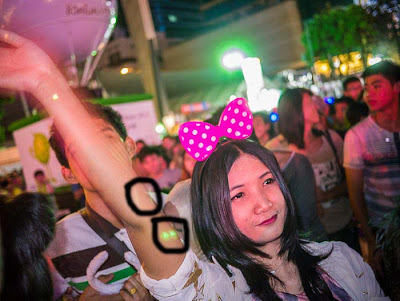 I haven't noticed anything like this when I use the Canons for similar work.

I really like the GX1 and the M4:3 lenses are amazing. Panasonic and Olympus have done wonderful job with the lens designs for the line (at least in primes, I don't have any of the zooms).

I can't tell you how many times, after a day hauling the 5Ds around town, I've said to myself, "I really wish I could use the Panny for all of it." Working during the day, the majority of what I do, I will  continue to use the GX1, especially for street photography. It has been rock solid reliable and a lot of fun under those circumstances.

I'm going to think twice though before I take it out for a night time assignment as my only camera. Last night's experience set me back a little. I took a gamble using the GX1 as my only camera and it didn't pay off as well as I had hoped it would. The real moral of the story is use the right tool for the job, and the GX is unfortunately not the right tool for available darkness street photography.

There are more photos from the New Year's Eve countdown in my archive and available from ZUMA Press.