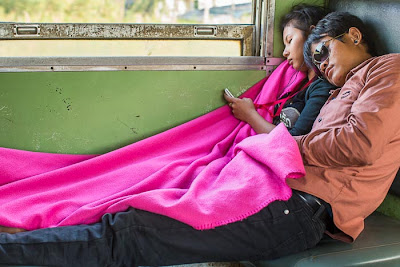 A couple shares a blanket while they try to sleep on the local train that runs between Bangkok Noi (Thonburi) and Kanchanaburi.

Jeff Topping, a photographer I knew from my time in Phoenix, was in Bangkok recently. He wanted to take a day trip, and I like riding the Thai trains, so I dragged him down to the Thonburi Train Station and we rode the 3rd class local train from Bangkok to the infamous Bridge on the River Kwai. It's supposed to be a little over three hours but the trains usually leave Bangkok late and almost always leave Kanchanaburi late. 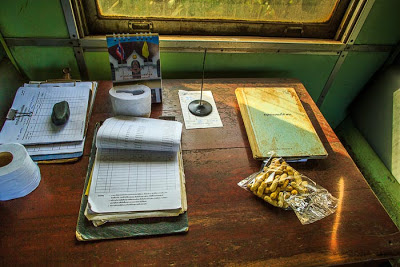 This is not a tourist or express train. It's an un-airconditioned local train that stops at nearly every siding and station along the way. The train, like most Thai trains, is spotlessly clean if a little Spartan. Some of the cars have padded seats, some of them have wooden slat seats. There is no dining car, but passengers won't go hungry. 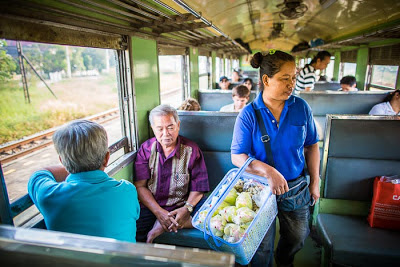 A fruit vendor walks through one of the cars.

A steady procession of food vendors work the train selling everything from beer to fresh fruit. There's stir fry with chillies and basil, fruit, iced coffee, chips - pretty much everything you would expect to find on a third class local train. The beer is cold and the stir fry is spicy hot, what more can you ask for? 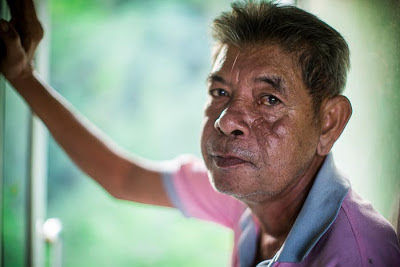 A veteran of Thai train travel relaxes in the doorway of the train.

I've spent a lot of time in Kanchanaburi through the years. The train is slow and dusty but it is by far the best way of getting to Kanchanaburi. The road from Bangkok is always crowded and Bangkok's urban sprawl has spread almost all the way to Kanchanaburi, driving is not that much fun. The train passes through rice and sugar cane fields, orchards and villages. With the window down, the swaying of the train and the rhythmic clacking of the wheels could well put you to sleep. But then you'd miss the view. 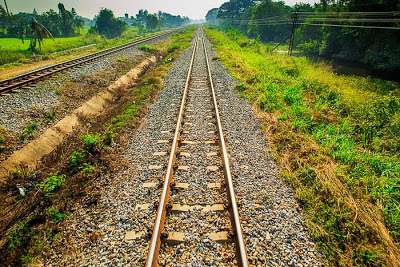 The view. Yes, Thailand really is that green.

Another advantage to riding the train? You're riding on history. The train to Kanchanaburi and beyond into Burma (Myanmar) and the Bridge over the Kwai is the train made famous in David Lean's epic film and Pierre Boulle's book "The Bridge On the River Kwai."

Almost nothing in the book or movie is real. The movie was filmed in Ceylon, now Sri Lanka and the bridge is iron, not wood. And it was bombed by airplanes, not William Holden. And the river was not then called the Kwai.

The Kwai is further west, the bridge was built over the Mae Klong (which is completely different from and in no way related to the Mekong). The Thai government changed the name of the river after the movie came out when tourists started showing up looking for the bridge.

And perhaps most horrifying, as bad as conditions appeared to be in the movie, they were far worse in real life.

The Japanese had slave laborers from Thailand, Burma and Java working alongside the Allied prisoners of war. More than 90,000 of the 180,000 of the Asian slave laborers pressed into service died during construction of the railroad. "Only" about 16,000 of the 60,000 Allied prisoners of war died on the railroad. In one six week stretch of particularly grueling construction, on the Hellfire Pass west of Kanchanburi, the Japanese beat 69 prisoners to death. I have Thai friends in Kanchanaburi who to this day will not travel parts of the railway because of the ghosts still thought to haunt the area. 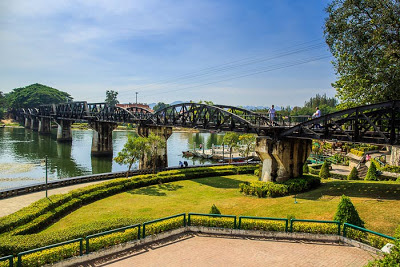 The Bridge. It's now a tourist attraction. Approaches to the bridge are lined with restaurants and floating resorts.

Kanchanaburi's tourist trade has skyrocketed thanks to the Bridge. There are golf courses, resorts, restaurants ranging from food stall status to three star status. There are temples (some genuinely old, some, but many made to look old), tigers and leopards and giant fish and souvenir stands a plenty. Some of the wildlife exhibits are controversial because there are reports that animals are sedated and abused to keep them compliant. 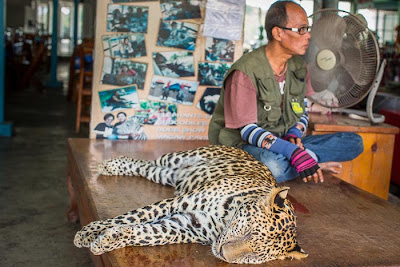 An apparently sedated leopard that is supposed to be a tourist attraction near the bridge.

After spending a couple of hours wandering around the bridge and having a nice lunch, Jeff and I got on a returning train and eventually got back to Bangkok. 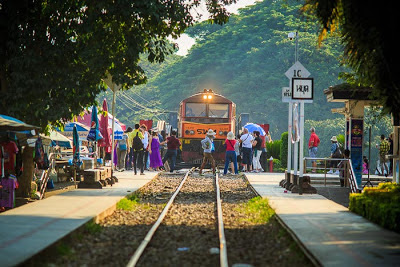 A vendor runs across the tracks as the returning train pulls into Kanchanaburi before heading back to Bangkok.

The train returning to Bangkok got into Kanchanaburi more than an hour late, which seemed to surprise no one in the Kanchanaburi station. 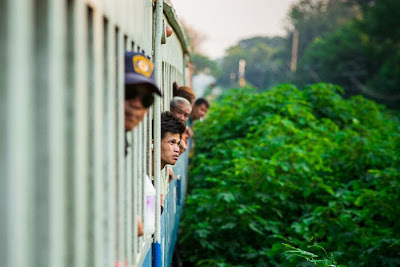 Passengers look at the windows after the train returning to Bangkok broke down in the countryside.

On the way back to Bangkok, the last car of the train had a mechanical failure and couldn't travel forward. This meant backing up to the last station we had stopped at, dropping the car and continuing onto Bangkok. We were really late getting into the City of Angels. 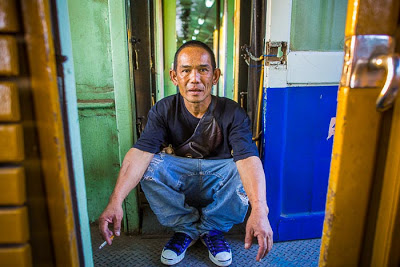 There are more photos from Kanchanaburi, which is a very interesting town, in my archive.

Finally, most of the photos in my archive are available for editorial use or self fulfillment as prints. If you see something you'd like to use or just hang on the wall, click on the "Add to Cart" button and follow the onscreen prompts.
Posted by Jack at 07:09