Reaching for the Relic

I'm a little behind in blogging so the next few entries are going to be out of order. 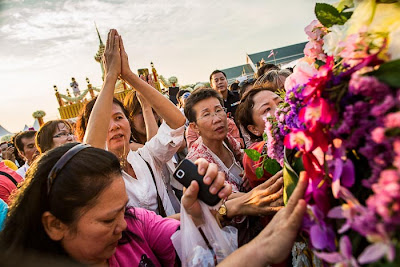 Women reach to truck carrying a relic of the Buddha during a ceremony to honor the relic in Bangkok.

I took Jeff Topping down to see the old part of Bangkok while he was here. We wandered through the Amulet Market and then headed out to find something to eat. We crossed Sanam Luang, and couldn't help but notice there was a Buddhist ceremony going on. Being a couple of photographers with nothing in particular to photograph we immediately seized the opportunity to make a few pictures.

There was a lot of security around the ceremony, so we mostly worked the periphery, photographing people in the crowd praying. This being Thailand, once the security people realized we weren't "normal" tourists (I don't know how you define a normal tourist, but whatever the definition, we didn't fit the profile), they let us into the media space to photograph alongside the Thai newspaper and magazine photographers that were there. (Maybe it was the fact that I was dressed appropriately - long slacks, long sleeved white shirt and a press credential around my neck. Or maybe they just took pity on us.)

There were a number of high ranking politicians from Bangkok city government there along with senior monks and members of the military command staff. All of which explained the security. Jeff and I photographed the ceremony, which was to honor a relic of the Buddha. The relic, a strand of hair from the Buddha, was on loan to Thai Buddhists from Buddhists in Sri Lanka. It was being moved to a temple in Ayutthaya, we had stumbled into the farewell ceremony for the relic.

I expected to be at the service for a few minutes and then push onto lunch. Minutes stretched into hours and before we knew it lunch time was dinner time and the ceremony was still going on. And we were still photographing.

The ceremony didn't end until the truck carrying the relic to Ayutthaya left the park. Even then, people stayed to pray at the shrine that had been built for the ceremony. Many folks also took a souvenir from the event - a lotus blossom from the shrine or a candle or other memento. It reminded me of services I had covered in the Southwestern US for a relic of St. Therese, a Catholic saint with a large following in the US.

It was dark by the time we left the park. So we hopped into a tuk-tuk, which honestly is my least favorite way of getting around, and headed home. There are more photos from the ceremony in my archive or available from ZUMA Press.
Finally, most of the photos in my archive are available for editorial use or self fulfillment as prints. If you see something you'd like to use or just hang on the wall, click on the "Add to Cart" button and follow the onscreen prompts.
Posted by Jack at 20:40