One Night in Bangkok

"I can feel the Devil walking next to me".... Lyrics by Murray Head* 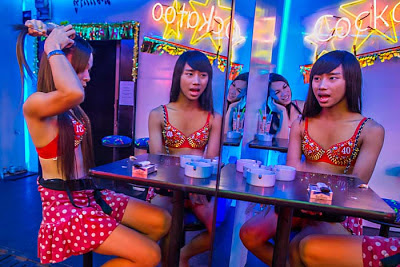 Entertainers from the "Cockatoo" a ladyboy/kathoey bar on Soi Cowboy relax on the mirrored porch in front of the bar. Another line from the song is "But the queens we use would not excite you..."

Eventually almost everyone who comes to Bangkok ends up at Patpong, Nana or Soi Cowboy, the city's infamous red light districts that cater to western men. Like visiting Bourbon Street in New Orleans, it's a part of seeing the sights of Bangkok.

It's not unusual to see families wandering around Patpong, which has changed over the years and become a Disnified version of its former self. There's a night market that sells everything from knockoff designer bags to knockoff designer clothes to knockoff designer watches. I have a fine collection of "replica" watches - Panerai, Tag Heuer and Breitling - that I bought in the Patpong night market. They look great but keep terrible time (I guess there's a reason a real Panerai costs $8,000 and mine cost $8).

Nana is pretty raw. It's lined with go-go bars, beer bars and worse. Couples walk through Nana but they don't linger and not many families go in, not even to gawk. Lonely Planet says "Nana is where the sexpats are separated from the gawking tourists." That's as apt a description as any I've read. The best I can come up with is Sodom and Gomorrah. Real Old Testament debauchery.

Soi Cowboy is a cross between the two. Like Patpong, it's a street lined with bars (Patpong is actually two parallel Sois between Silom and Surawong Roads in Bangkok's financial district), but there is no night market at Soi Cowboy.

On the other hand, Soi Cowboy has some of the best neon in the city, making it popular with photographers and there are bars at the east end of the Soi that are not a part of the sex trade, so it's popular with adults who want to have a beer and take in the sights but not get too close to the action. Patpong also has a nice neon display, but it's a little harder for a photographer to work there.

Photographing people in the red light districts can be difficult. It's hard to build trust in an environment where everyone is "on the game," as they say in Thailand. To do any serious photography you have to work quickly and be willing to take no for an answer. Don't overstay your lack of a welcome.

The best body of work I've seen coming out of the sex trade in Bangkok was done a couple of years ago by Katharina Hesse, a German photographer based in Beijing. Her work is stunning.


The world's oldest profession has been practiced for centuries here. Although it's frequently equated with American servicemen on "R and R" from Vietnam, the fact is Thailand, like most places, had a sex trade before the GIs came here and will have one long after the last lost soul leaves.

As Billy Kwan observed while talking to the misanthropic Pete Curtis in "The Year of Living Dangerously," "starvation is a great aphrodisiac."

Whatever happens, it is certainly not consensual. It's not love, or even like, at first sight. This is a purely financial relationship, under other circumstances be scientists or lawyers or astronauts or Prime Ministers.