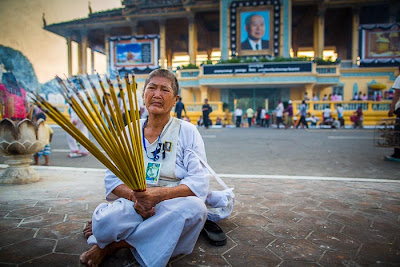 A woman burns incense and prays while mourning for late King Norodom Sihanouk in front of the Royal Palace in Phnom Penh.

Norodom Sihanouk, the mercurial former King of Cambodia, died in Beijing in October. Cambodians went into mourning for their beloved, complicated King. His cremation is to take place Monday, February 4. I am in Phnom Penh for the cremation.

Sihanouk ruled Cambodia wearing a variety of hats. Sometimes as Prime Minister, sometimes as King. He abdicated twice (the final time in 2004), he started the war against the Khmer Rouge and then became their public face. When the KR killed members of his family and he could no longer ignore their atrocities he turned his back on them. After his 2004 abdication, the Cambodian government bestowed the honorific of "King-Father" on Sihanouk.

In 1970, Sihanouk was deposed by a coup led by Cambodian General Lon Nol. The coup was supported by the United States, which wanted to widen the war in Vietnam to include Cambodia (to get at Communist safe havens in eastern Cambodia). The US bombing of Cambodia strengthened the Khmer Rouge and led to their eventual victory and the subsequent genocide that scars Cambodia to this day. (Not to mention the thousands that have been killed and maimed since the war by unexploded ordinance dropped by US planes.)

Through it all, Sihanouk was a presence in the lives of Cambodians. He was a prolific author and film maker. He liked to be seen with Western celebrities and movie stars. Phnom Penh in the 60's was a haven from the fighting in Vietnam and hustle of Bangkok. The rich and famous called on the King, who loved the limelight.

His legacy in Cambodia will be disputed for years. But he was loved by his people and was one of the towering figures of Southeast Asian history in the middle of 20th century.

There are more photos of people mourning their King in my archive.